A new 7mm bullet for F-Class from Berger

Specifically designed for F-Class competitions and tested in collaboration with the US F-Open Rifle Team, the 184 gr F-Open Hybrid Target Bullet is heavier and longer, with a more aggressive ogive shape

Berger releases its new 7mm 184gr F-Open Hybrid Target Bullet. The bullet was designed by Berger’s ballistician Bryan Litz to be slightly heavier, slightly longer and have a more aggressive ogive shape. According to the manufacturer, this ballistic profile optimization offers a ballistic advantage to existing Berger 7mm 180gr Hybrid and VLD Target bullet designs. The bullet complements the 30 cal 200.20x Hybrid Target bullet that was released last year in collaboration with the US F-TR Rifle Team.

The partnership with the US F-Open Rifle Team 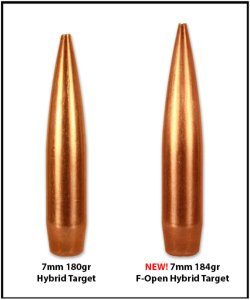 The new product will be the official 7mm bullet of the US F-Open Rifle Team. F-Class, one of the most popular and fast growing precision rifle shooting disciplines, is shot prone at distances of 300 to 1200 yards. Competitors may use almost any caliber rifle up to a .338, a scope, and a front and rear rest or bipod.