The 7,92x33mm or 8x33mm "Kurz" round is nowadays largely forsaken, and has never been a popular hunting cartridge − but it's nonetheless historically significant as the forerunner of all so-called "intermediate calibers" used in modern assault rifles

All throughout the history of firearms and ammunition development, Germans were always at the cutting edge of innovation, and the world followed their leads in several new ways established during the years.

The 8x33mm "Kurz" cartridge is yet another example of it: just like the 8x57mm IS Mauser cartridge was the ancestor of most, if not all, military cartridges of its time and of modern military cartridges, its literally smaller sister − the 8x33 "Kurz" round, that is − was the world's first intermediate cartridge, explicitly developed to be used in an assault rifle; it was subesquently modified into the more famous Russian 7,62x39mm M43 caliber, which still owes much of its popularity to the Kalashnikov AK-47/AKM assault rifle system.

Early on in World War II, possibly just as early as in 1940, the German forces soon realized how the new concept of war of movement (the Blitzkrieg) would require radical changes in the field of individual infantry weapons and equipment. 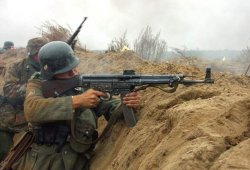 The classic standard rifle rounds, such as the Germans' own 8x57mm Mauser caliber, were often too powerful for the requirements of the new theatres of operation, and required the use of heavy and long guns that were less than easily maneuverable in many situations of urban combat and largely overkill for combat situations where most engagements were on mid-to-long distances. A smaller caliber would have allowed the use of lighter, shorter firearms, and would have allowed every single infantryman to carry more ammunition on his person.

Engineers had been working on the project of the 7,92x33mm, or 8x33 "Kurz" caliber, for several years now; firearms manufacturers such as Carl Walther and C.G. Haenel had been tasked to develop the "assault rifle" (or Sturmgewehr) prototypes that would use the new cartridge.

The new gun had to be a lightweight select-fire weapon, capable of semiautomatic or full-automatic operation, whose manufacturing materials would make it fast, easy and cheap to manufacture.

As World War II waged on, Germany's luck turned and defeats quickly overnumbered its early victories, making it harder for the Country to support the war effort with its economy and industry; this and other factors caused the 8mm "Kurz" round and the Sturmgewehr rifle to be fielded only around 1944 − too late to make a difference.

The 8x33mm "Kurz" round was first fielded on the eastern front, and its capabilities were warm-heartedly acclaimed by German soldiers and thoroughly suffered by the Soviet soldiers − which, however, couldn't help but recognizing and appreciating the potentials of the new enemy round. Once a sufficient number of 8x33mm rounds and Sturmgewehr rifles were captured by the advancing Russian troops in their march towards Berlin, the Soviet engineers took them as a basis for the development of the 7,62x39mm cartridge and of the AK-47/AKM rifle system.

The 8x33mm "Kurz" round was developed basically by reducing the size of the original 8x57mm IS Mauser round to 33 millimetres, and loading it with a 125-grains ball. The new small-caliber round would develop muzzle velocity levels of about 700 metres-per-second (approximately 2300 feet per second), with its energy levels ranging around 200 kilograms-meter (well over 1900 Joules!) − more than enough for the tasks it had been conceived for, and indeed its Soviet/Russian knock-off still today offers more or less the same performance levels.

The 8x33mm "Kurz" is not a hunting round, and due to its size it could even be outright illegal to use for hunting according to the laws of some Countries. 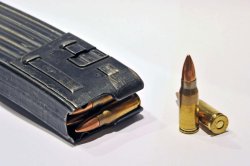 Up to not much time ago, shooters used to trim and crimp .308 Winchester caliber cases to obtain 8x33mm "Kurz" reloading cases; with the recent launch of dedicated semiautomatic clones of the Sturmgewehr MP44 assault rifle − and to the presence of several original MP44s of World War II heritage on the European civilian markets, of course permanently modified to fire in semiautomatic mode only! − this niche cartridge is living a new age of popularity. It can be reloaded easily with sufficiently powerful propellants, such as the ones normally used for the hand-loading of Magnum handgun caliber rounds. 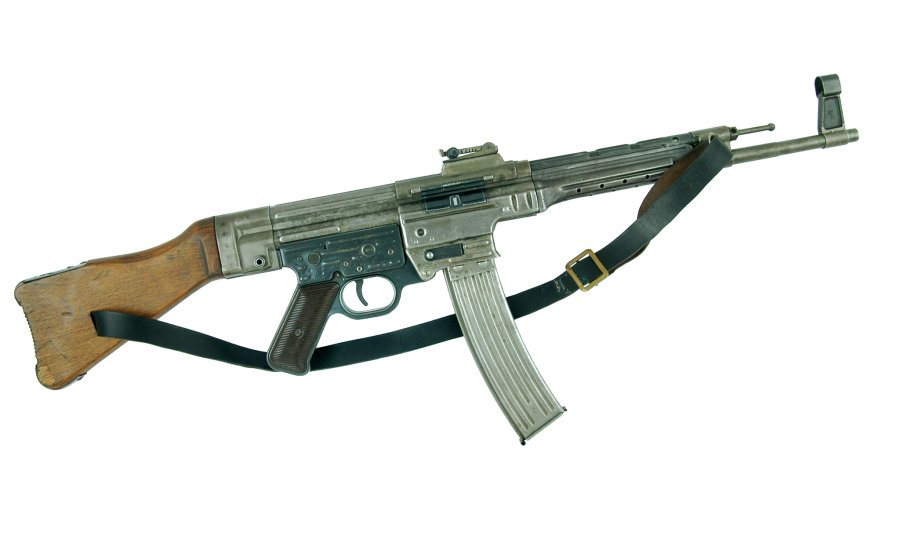 The firearm that was originally conceived to fire this cartridge − the Sturmgewehr 44 − is regarded as the forerunner of most modern assault rifles. Mostly manufactured out of stamped steel to reduce manufacturing costs and time, it was used as a basis by Mikhail Timofe'evič Kalashnikov for the development of the AK-47 design.

The Belgian FN FAL battle rifle was originally designed around the 8mm "Kurz" cartridge; when the United States imposed the 7,62x51mm caliber as a NATO standard for service rifles, the FN FAL had to be re-engineered around said then-new round.

Some examples of reloading specs for the 8x33mm caliber

Subscribe to the Newsletter
This article is also available in this language:
IT
Click here for more information on the topics:
AmmunitionAssault riflesHistorical FirearmsRiflesSemiautomatic riflesSport Shooting
That might interest you too: