Following the tragic Las Vegas incident, where alone one shooter killed 58 people apparently using semi-auto rifles equipped with bump stocks, the National Shooting Sports Foundation (NSSF) and the Sporting Arms and Ammunition Manufacturers’ Institute (SAAMI) issued a joint statement calling for “a prompt review and evaluation of aftermarket trigger activation devices such as bump stocks to determine whether they are lawful to install and use on a firearm under the National Firearms Act of 1934 (NFA), or whether, if they have no function or purpose other than to convert a conventional firearm into an automatic firearm, they are regulated items under the NFA.” “We urge Congress - SAAMI AND NSSF conclude - to allow ATF to complete its review before considering any legislation so that any policy decisions can be informed by the facts and ATF’s analysis.”

National Rifle Association has called for a regulatory review too, stressing anyway that it would not support legislation aimed at a total ban on these devices.

But what are “bump stocks”? Are they so lethal? And if so, why are they legal in the US?

“Bump” fire stocks are rifle gunstocks that uses the recoil of a semi-automatic firearm to fire multiple shots in rapid succession. Since the bump stock allows it to slide back and forth rapidly, the entire weapon “bumps” against the trigger finger. This way, semi-automatic weapons can almost emulate the firing speed of fully automatic weapons without the need to modify the internal mechanism.

Wikipedia
How a bump stock works: the stock allows the rifle to slide back and forth rapidly, and the entire weapon “bumps” against the trigger finger.

Why bump stocks are legal in the US?

Contrary to popular belief and what you see at the movies, it’s quite hard to own a real fully automatic weapon in the US: after the Firearm Owners Protection Act of 1986, machine guns are not illegal, but it is illegal to make and register new ones. So, you can only trade the ones that have been out since 1986, which means that they are relatively few and very, very expensive: from some thousands to tens or hundreds of thousands of dollars – basically, they are rich collectors’ items.

On the contrary, bump stocks are currently legal In the US. The ATF, the federal organization that regulates via licensing the sale, possession, and transportation of firearms, declared in 2010 that "The stock has no automatically functioning mechanical parts or springs and performs no automatic mechanical function when installed. In order to use the installed device, the shooter must apply constant forward pressure with the non-shooting hand and constant rearward pressure with the shooting hand. Accordingly, we find that the 'bump-stock' is a firearm part and is not regulated as a firearm under Gun Control Act or the National Firearms Act."

Technically speaking, since it can’t fire in rapid succession without the need to pull the trigger individually, a bump stock is not a “machine-gun”.

But are bump stocks “machine guns in disguise”? Not really. Even if they can make you achieve (theoretically) rates of fire up to 800 rounds per minute, they are not so popular among firearms enthusiasts and shooters for some good reasons. First of all, bump stocks cause rifles to be less accurate: to use them with any effect a shooter has to simultaneously push the handle grip forward while pulling the forend backward, maintaining that motion the entire time.

The recoil is also sharper, because it’s the entire mass of the weapon going back and forth and making the whole thing hard to control. Not very easy to hit a target this way, and many people consider bump stocks little more than toys to waste expensive ammo.

Moreover, what perhaps not everybody knows is that “bumpfire” long predates bump stocks: it’s an old shooting technique by which putting your finger through the trigger guard and grabbing onto your belt loop, with some practice any gun – even a pistol – will “bump”. Still not easy nor useful, but feasible.

At the end of the day, bump stocks are not so-deadly instruments and before Las Vegas no killing spree incident was ever related to their use. Should they be banned anyway? We’ll leave you to decide. They have been probably used in a horrible massacre, that’s true. But bloodier massacres have been committed in Europe using vans and trucks, yet nobody asked for vehicle bans or restrictions on driving licenses. So, the real question is: what really kills people, objects or evil people?

Update: Current political development in the US (first week of November 2017):

Washington Attorney General, Bob Ferguson, told local US-media in these days, he is up for a renewed push for a prohibition on “assault weapons and high-capacity magazines.” He feels his duty, "to protect the public".

Ferguson, who unsuccessfully tried a similar attempt in 2016, told the newspaper "The Daily World" last week, that he would like to see the ban legislation succeed. “We are bringing back legislation that will outlaw the sale of assault rifles and high capacity magazines. This would limit magazine size to 10 rounds maximum.” Words that sound famliar to all of us, living in Europe and  following the "EU Gun Ban Story" from EU Parliament every day.

Besides the reach for an assault weapon ban and magazine capacities, Bob Ferguson also proclaimed last week for the US, that he would like to see movement on a bump stock ban as well as to raise the minimum age for gun purchases in the state of Washington to 21 years.

Also the NRA chiefs Chris Cox and Wayne LaPierre are "open" to discuss about a bump stop ban. Anyway it looks like a clever move to stop further discussions about other legal restrictions for firearms in the US. We'll see, if this strategy pays off.

Bump stocks are still available in the US

The US company Slide Fire produces bump stocks, approved by the Bureau of Alcohol, Tobacco, Firearms, and Explosives (BAT) in 2010. The bump fire stock marketed by Slide Fire is based on a patent from 2000 and a very profitable business. Latest information from the US say: delivery and sales are now going on ...

All over Europe the situation is quite easy: All what comes close to "full-auto" firearms is clearly forbidden. To make it short: Don't even think about it in EU!

We'll keep you updated about the current discussions and decisions in respect to a possible ban of bump stocks in the USA. 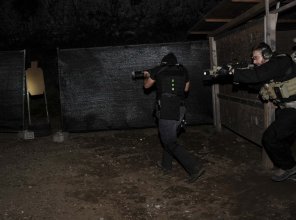