With this handy and compact flashlight Fenix Light offers hitherto unthinkable performance levels for a pocket light, with as many as 3000 lumens of output! Let's see together the most interesting details.

If only four years ago someone had hypothesized the current performances of flashlights, we would not have believed him. 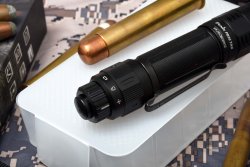 Roberto Allara, © Roberto Allara
The toggle switch and push-button allow to set all the functions of the Fenix PD36 Tac flashlight.

But in recent times the performance of LEDs has had an extraordinary increase and batteries, with the recent 21700 models, have reached the capacity of 5 Amps. Compatibility between the 21700 and the 18650 batteries exists in only one way: since the diameter of the more powerful battery is slightly larger you can replace it, in case of emergency, with an 18650, while the opposite is usually not possible. Obviously, performance with the lower capacity battery will be affected, but the possibility to use a battery which is easily available, and even to use in its place two very common CR123 batteries, should not be underestimated.

The battery that comes standard with the Fenix PD36 Tac is in fact rechargeable and doesn't require a dedicated charger. You can just use a USB port that today you also find in most cars – but recharging takes some time and sometimes it is not available.

The flashlight comes in a cardboard box with a plastic inner container, so well-protected even from clumsy couriers. Along with it we find a belt holster, a USB charging cable, a manual in several languages and a very useful a spare O-ring that will allow you to maintain the flashlight waterproof. 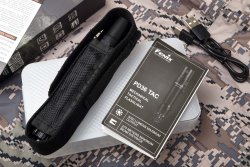 The battery is inside. The small size of the flashlight is surprising, with a maximum diameter of 1.1”/28 mm measured on the octagonal section of the aircraft-grade aluminum housing. The octagonal design serves to avoid rolling when the flashlight is placed on a flat surface. Overall length is 5.51”/14 cm including the back push switch: with a 3000 lumens output I think this is a compactness record, although in my opinion it will be beaten in a short time, probably by Fenix itself. The performances of this little flashlight are stunning. By means of a switch you can choose between two modes, called Duty and Tactical respecively, as well as a stop position that prevents the unintentional operation of the flashlight. 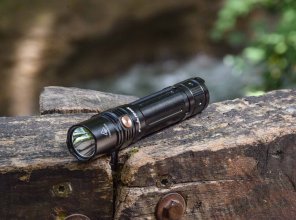 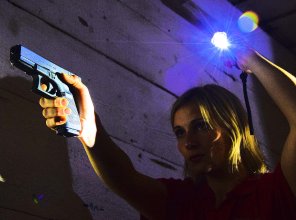 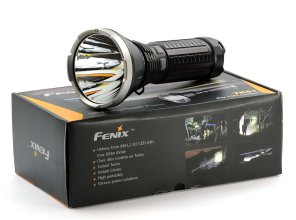