Developed in collaboration with the legendary Lt.Col. Jeff Cooper and introduced twenty years ago, the Scout is now also chambered in the new trendy caliber 6.5 Creedmoor. Light, accurate and reliable, this bolt-action rifle can be used for a wide range of applications from patrolling, hunting or target practice at the range. Some people say: that's the perfect multi-purpose rifle for hunters. By the way: In Europe the model is called MANNLICHER Scout. Let's look at the details:

The Scout rifle was developed some twenty years ago in collaboration with the late - and legendary - Marine Corps Lt.Col. Jeff Cooper, who defined the rifle's basic concept and features. A combination of versatility, durability, accuracy and reliability in a compact and lightweight bolt-action rifle platform, the Scout is now also offered by the Austrian manufacturer in 6.5 Creedmoor caliber too, in addition to the already available versions in .223 Remington, 243 Winchester, 7mm-08 Remington and .308 Winchester.

Conceived by STEYR ARMS as an “all-purpose rifle”, with a short overall length of just 38.6" / 980 mm and a light weight of 6.6 lb / 3 kg the Scout can in fact be used for a wide range of applications from patrolling, hunting in nearly any environment or target practice at the range. The new 6.5 Creedmoor chambering makes the Scout even more versatile, since the cartridge is ideal both for long-range target shooting and game hunting. Its fluted, cold-hammer-forged barrel is 19" / 482 mm long, and the action was designed to accept a low-powered, forward-mounted scope. Backup “ghost-ring” iron sights integrated to the top rail can be deployed within seconds should the optics fail. Besides this, the rifle can also be fitted with a standard scope.
In Europe STEYR Arms has positioned the model clearly in the segment of hunting rifles. 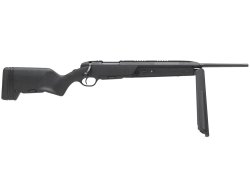 The polymer stock features an innovative integrated bipod that can be easily deployed but is almost unnoticeable when folded away.

The two-position magazine system allows the rifle to be fed individually with the five-round polymer magazine in a lowered position – a more modern and smarter version of the cut-off system used in military rifles of yore. The magazine can be seated one step further with minimal pressure, allowing the bolt to feed cartridges directly from the magazine. The model Scout also  incorporates a second five-round backup magazine in the buttstock. This way you don't even need a pocket for the extra magazine. Trigger is a single-stage adjustable type, with a pull weight of 4 lb, 8 oz.

Of particular interest is the polymer stock with an innovative integrated bipod that can be easily deployed but is almost unnoticeable when folded away. Between the bipod legs is a UIT rail for attachments. The stock is outfitted with five press-and-twist sling-swivel attachment points that – as highlighted by Steyr – “allow the addition of Cooper’s favored Ching Sling on either side of the rifle”. The recoil pad is elastomer with spacers to adjust length of pull.

Another technical nicety is STEYR's Safe Bolt System (SBS) action with a unique 2+1 safety function that offers three settings operated by a wheel switch on the tang of the stock. Its working principle is better explained by the manufacturer itself: “The FIRE mode (safety off) is indicated by a red dot, and the first level of SAFE mode disables the firing mechanism while allowing the bolt to be cycled. The second SAFE position locks the bolt, at which point the bolt can be pushed down against the stock, locking the firing pin and firing mechanism out of firing position, allowing safe transportation with a round in the chamber. Simply pressing the safety’s release tab and rolling it forward returns the bolt to either the SAFE or the FIRE position.”

The STEYR Scout rifle is available in a choice of Black, Mud (as seen here), Green and White “Mannox” finishes,

Available in a choice of Black, Mud, Green and White “Mannox” finishes, the STEYR Scout rifle has a MRSP of 1735 USD shipped with two 5-round magazines and three sling swivels. A high-capacity conversion kit and hi-capacity magazines to increase carry capacity to 20 rounds can be bought as optional extras. Depending on caliber and market, price in Europe is about 2200 euro.

Here is some more info from the manufacturer including a dealer locator for all Europe. 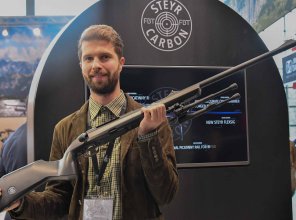 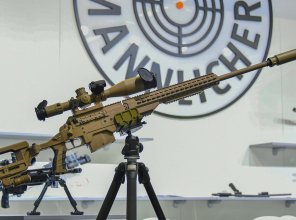 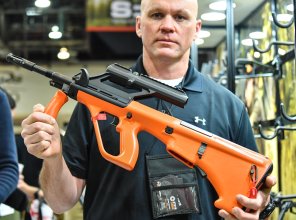 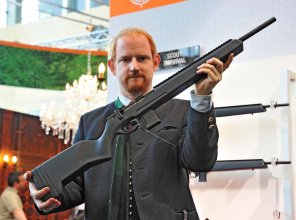 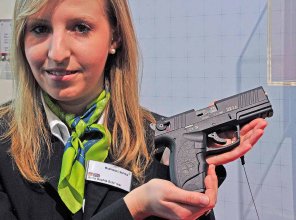 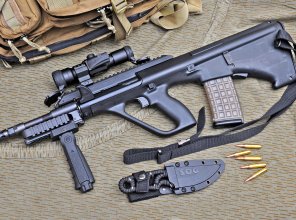 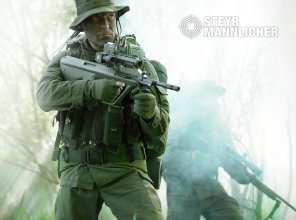