The majority of local hunters are rarely embarrassed to take a shot at a piece of game more than 100 to 150 meters away. Often, only renting a lane in one of the few shooting ranges with the appropriate distances or booking a long-range seminar is considered. Learn all you need to know about long range hunting here at all4hunters. 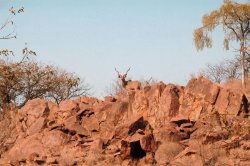 Andreas Rockstroh
Hunting in the Black Continent offers situations resembling alpine big game hunting too, as this kudu in the rocks in Namibia shows.

In principle, the hunter has to deal with the same external ballistic parameters as other long-range shooters. However, in long range hunting some of them are negligible, such as the bullet drift or the Coriolis force. This is simply because these effects can't affect hunting ranges of just over 300 meters to have a significant influence on the point of impact.

With regard to wind drift, depending on its speed and the selected bullet, it may of course be different, so it is advisable to resort to faster calibers with a straighter ballistic curve and thus shorter flight time. However, in addition to external ballistics, for hunters a very decisive factor is added:

Target ballistics: the effect of a bullet in the body of a wild animal 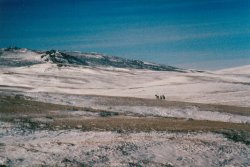 Andreas Rockstroh
Far standing Marals in the Mongolian steppe. In  open terrain you can not approach these Asian deer at too close ranges.

While the shooter wants to hit a certain point/area on a surface, such as a target or a steel plate, the hunter has to deal with a three-dimensional target: the game's body. In sports shooting, it doesn't matter in what condition and on which way the bullet finally ends up in a safe bullet trap - this can also be the ground behind the paper target or in front of the steel plate.

When a hunter shoots at wild animals, it's completely different: what matters here is that the bullet kills the animal as quickly and painlessly as possible. This is only  possible if the bullet destroys vital organs or causes a rapid, large blood loss or shock effect. For this purpose, however, it must also take a correct path through the corresponding organs or vessels after hitting the body, before leaving it through an exit wound. A well-proven method for this is the so-called "shoulder blade shot", that's for instance a shot into or behind the shoulder area of a deer or boar. It's the area where the heart, lungs and the large blood vessels running between them are located. When shot directly on this area, bone fragments from the bullet usually aggravate the wound within the body, but also destroy more of the valuable venison. Therefore, many hunters aim for a spot immediately behind the "shoulder blade", which is certainly still in the vital area. If hunter and target are at about the same height in the terrain, a bullet penetrating the so-called shoulder line in the vital area should normally penetrate it and have the full knock-down power.

Long range shooting in the mountains

The situation is different, when you are hunting in mountain areas. Here, the hunter is mostly far above or below the piece of game, so he must fire at a steep angle. And here again an external ballistic factor plays a bigger role: the gravity of earth! Gravitation causes all objects (that have a mass) to be pulled toward the center of the earth, or more simply, to fall vertically downwards unless other forces act on them. Earth's gravity is the force that determines the parabolic trajectory of a projectile (of course, influenced by air resistance). Since the gravitational pull acts with the same force at each point of the curve, at least for the flight/shooting ranges considered here, the bullet drop caused by it remains constant in relation to the flight time. 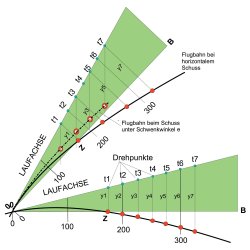 Peter Pulver
This simplified graphic shows the influence of gravity on bullet trajectory. Since the trajectories (y) are always the same at a certain time of flight (t), the trajectory becomes flatter at steeper firing angles and the target (Z) is thus overshot.

So if you reach out a point in the trajectory that the bullet reached after a certain time of flight, the bullet will have dropped a certain distance. The distance that the projectile has dropped until that time does not change even if the same projectile leaves the barrel at the same muzzle velocity with a different angle – that is, in the case of mountain hunting, if the barrel is pointed upwards or downwards (see also the graphic). Anyone who has ever seen how a boom barrier with a curtain opens, can probably understand that better. In this case, metal bars, which are intended to prevent pedestrians from crossing underneath the barrier, are suspended from the barrier arm. At the lower end of the hanging bars, is a smaller arm which also hangs on links. If the barrier opens, the arms are now always vertical and the steeper the barrier, the closer the lower arm gets to the top arm. Transferring this to the example of a shot fired steeply upwards, the red-white barrier arm corresponds to the upwardly pivoted barrel axis (= exit direction) and the lower arm corresponds to the trajectory and the bars between them correspond to the bullet drop. Of course, the downdrafts of the projectile trajectory are not all the same length due to their parabolic course, in contrast to the bars of the barrier.

Based on the ballistic curve, the described approach to the barrel axis results in a more extended trajectory and thus a shift in the point at which the line of sight intersects the trajectory for the second time (which should ideally be within the target) beyond the target range. In practice, this means that steep shooting angles can lead to an overshooting of the target (high shot). The hunter must therefore know at what range and at which angle this effect on the chosen rifle and ammunition combination is so noticeable that a hit on the blade line would jeopardize a safe shot and which aiming point he should choose instead. To determine the shooting angle, a laser rangefinder which also indicates these data should be part of the basic equipment of the Alpine Hunter.

The ballistic effect on long range distances up to 350 meters 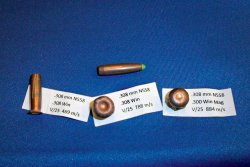 But the long range hunter has another aspect to consider: He needs to know what effect his bullet has at a long range on the target, in order to achieve the necessary lethal effect. And if possible, without risking long searches in mostly difficult terrain. Depending on the caliber, modern hunting cartridges, whether they are deformation, fragmentation, partial fragmentation or even mass stable solid bullets, reliably ensure this for larger game such as deer, moose and large antelopes at distances of 300 to 350 meters.

Those who want to try their hand at longer ranges should be absolutely sure of themselves and aware of all the above-mentioned external and target ballistic factors. But at the slightest doubt, if you are not sure you can hit where the shot has its desired effect, just keep your finger straight. Never forget: hunting must be ethical!

Subscribe to the Newsletter
This article is also available in this language:
DEIT
Click here for more information on the topics:
CultureLong range rifles Long range shooting
That might interest you too: