2019 is the 70th anniversary of the establishment of Swarovski Optik, the division of the Austrian Group dedicated exclusively to the production of optics such as telescopes, binoculars and riflecopes. A goal achieved thanks to a continued technological and qualitative commitment.

© F.PALAMARO
The 70 years special logo at the Swarovski Optik booth at the IWA 2019.

Swarovski Optik celebrated its 70th anniversary at the IWA 2019, but in reality its roots go much deeper over time. If its status as an independent company division dates back to 1949, the Austrian company actually has a longer and more complex history, which we will try to summarize shortly.

Foundation and history of Swarovski Optik

The legend of Swarovski company starts with the family's progenitor, Daniel Swarovski, who was born in 1862 in Jiřetín pod Bukovou, a Bohemian town, now in the Czech Republic, at the time part of the Austro-Hungarian empire. The son of a crystal cutter, Daniel followed in his father's footsteps but showed a particular interest in new technologies from an early age. In 1883 he visited an electricity exhibition in Vienna and was literally "struck" by the new power source. He began studying this subject, which at the time was still a mystery to most, and after nine years, in 1892 he patented the first electric crystal cutting machine. 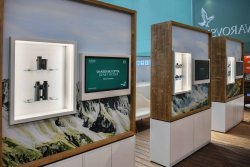 © F.PALAMARO
Another view of the IWA booth section that Swarovski Optik dedicated to its first seventy years of activity.

The success was immediate: the new machines allowed processes that were unthinkable unitl then, but they needed electricity to work, far from easy to find in Bohemia. For this reason, in 1895 Daniel moved to Wattens, in the Austrian Tyrol, where he and a partner opened a glassworks factory powered by a nearby hydroelectric plant. His business boomed and in 1919 Daniel founded Tyrolit, a company that produced abrasives and blades for crystal processing.

In the following years the company continued to devote itself essentially to the production of ornamental crystal objects, but when Daniel's son  Wilhem, a passionate amateur astronomer, joined the company there was the first foray into the world of optics.

In fact, the first Porro prism 6x30 binoculars strongly desired by Wilhem were designed in 1935, and they were produced for the German army from 1939 to 1945 with the CAG industrial code. Wilhem succeeded in combining his knowledge of observation optics with the cutting-edge processing techniques of the family company, creating a perfect blend of mechanical precision and lens quality.

The rebirth after the Second World War

Following the devastation of the Second World War the company's activity resumed and in 1949 Wilhem Swarovski decided to found Swarovski Optik to devote himself completely to the production of high quality optics. The first product to come out of the Absam factory was the Habicht binoculars (or “hawk”, in German) with Porro prisms in the 6x30, 8x30, 7x42 and 10x40 versions 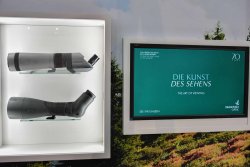 © F.PALAMARO
The "spektives" are among the most popular Swarovski products:  high-magnification observation optics.

Over the years, thanks to constant innovations, the Austrian company achieved important milestones and offered revolutionary products in terms of concept and quality, such as the 30x75 telescopic “spektive” (1957) and the first camera monoculars (1966), the forerunners of Digiscoping. 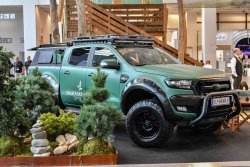 © F.PALAMARO
This spectacular, super-equipped off-road vehicle was one of the attractions at the Swarovski booth.

A second turning point was in 1985 when the first 7x30 and 8x30 SLC roof prisms binoculars were introduced. Without forgetting that the first Swarovski's riflescope, a 4x32, dates back to 1959 while in 1993 the first Swarovski riflescope with illuminated reticle was presented. Continuous technological innovation in 2018 earned Swarovski Optik the prestigious international "Red Dot Award", won by the CL Companion binoculars, with the following jury motivation: "A new sophisticated visual concept, an intuitive use and a language of ergonomic design are the features that make the Companion CL so special.”

Seventy years after its foundation, today Swarovski Optik is a company with 850 employees and a turnover of around 180 million euros, while the Swarovski Group, managed by the fifth generation of Daniel's heirs, achieves a turnover of 3.2 billion euros and has about 32,000 employees. In addition to crystal objects and hunting, birdwatching and leisure optics, the group is also a leading manufacturer of road reflectors with the Swareflex division.

We just have to wish Swarovski Optik a happy birthday, inviting you to learn more about this company through their website: https://it.swarovskioptik.com/

Find all the IWA 2019 news here at all4shooters.com

Subscribe to the Newsletter
This article is also available in this language:
RUIT