The legend is back: the Walther PPK is being manufactured again after a decade-long break – but not in Germany

Considering a Walther PPK as a new acquisition for target shooting or self-protection purposes can cause the following reactions: raised eyebrows, furrowed brow and whispered sentence fragments. In “9mm Kurz”, or under the international designation .380 ACP, pocket pistols are booming in the United States, however. In the New World, Walther's evergreen is also in demand and has even recently been manufactured by Walther's US subsidiary in Fort Smith, Arkansas.

Nevertheless, the old design seems outdated compared to modern subcompact pistols of about the same size in 9mm Luger caliber.

Still up-to-date: the hammer-fired action of the Walther PPK 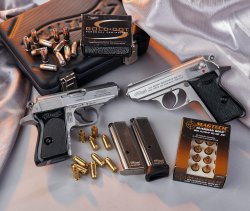 © Marcus Heilscher
The magazines of the Walther PPK (left), which are designed for six cartridges, do not fit in the PPK/S, but the other way around they do.

In reality, things are different: hammer-fired pistols with a safety/decocking lever are still unsurpassed in terms if safety and, in addition, like a DA/SA revolver, they are immediately ready for use. If the Walther PPK's safety/decocking lever is operated after a cartridge has been chambered, the hammer won't fire the round. The shaft of the Walther's safety has a cam. The hammer hits this instead of the firing pin when it is decocked using the safety/decocking lever. When the lever is released, the trigger springs forward again, the gun is loaded, but the hammer is decocked. As with a DA/SA revolver, the pistol can be stored or carried in this manner for any length of time. If necessary, the user decides whether to fire the first shot with higher resistance by pulling the trigger or to cock the hammer and fire the round with significantly reduced trigger travel and resistance. The additional drop safety ensures that a locking piece is only released when the trigger is pulled, freeing the firing pin travel. 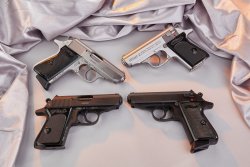 © Marcus Heilscher
Visually, the new versions differ more in finish than in size. Only the grips of the PPK/S measure just under seven millimeters more.

After all, modern polymer pistols are not completely new. DA/SA hammer-fired pistols like the Heckler & Koch SK 2000 V3 are the exception – and larger than a PPK. Many polymer models are based on striker-fired actions with a trigger safety. Its feature is the lever incorporated in the trigger blade. This design does not require a manual safety – good! The striker is partially preloaded and the trigger must be moved a long way to overcome a trigger pull weight of usually more than three kilograms. This characteristic inevitably stands in the way of the accurate shooting. Of course, such guns also have a drop safety, but rarely such a clear (safety) indicator as the Walther with its loaded chamber indicator. The indicator pin protrudes several millimeters from the end of the slide if a cartridge is in the chamber. The indicator is clearly visible in the light and easy to feel in the dark. Many polymer pistols, on the other hand, let you see deep, but only in good light: the brass of the case can be spied through a small peephole at the end of the chamber. But not all cases shine. And the extractor claw, which protrudes somewhat when a cartridge is in the chamber, is not installed in all modern pistols in 9 mm Luger. 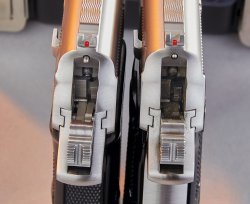 © Marcus Heilscher
The loaded chamber indicator is visible in the light and easy to feel in the dark. Above it is the rear sight with red dot.

Overall, the new old PPKs from the USA present themselves at a high level of workmanship. Visually, there is nothing to complain about in either the black or silver models. All versions are made of stainless-steel, the black ones featuring an Isonite Li2Fe3-type nitrocarburizing finish. In SA mode, the trigger pull weight is between 2200 and 2300 grams, with barely noticeable creep. The contrast of the fixed sights is enhanced by red markings. Appearance and grip of the plastic grip panels is rather, well, “vintage”. Grippier wood or rubber grips are the option for use with clammy or wet hands. More grip is also provided by the included spare magazine with pinky extension. The PPK holds six cartridges, the PPK/S seven, with one more in each chamber. 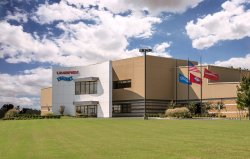 © Walther Arms USA
Fort Smith in Arkansas is the headquarters of Walther USA and Umarex USA. The PPK and PPK/s are also manufactured there as a new edition.


The difference between the PPK and the -/S variant lies only in the grip section, which is a few millimeters longer, and a differently shaped hammer spring housing. At the time, however, this mini-excess length was sufficient to allow the PPK/S to be exported to the USA according to the import requirements of the BATF (Bureau of Alcohol, Tobacco, Firearms and Explosives). However, import was banned for the too small PPK according to the "Gun Control Act" of 1968.

Resuming production, but transferring it to the subsidiary Walther USA, was therefore a logical and legally necessary step. The former US production of PPKs at the then Walther importer Interarms had been discontinued at the beginning of this millennium; since then, US fans in particular had hoped for a resumption of classic production. Since the Walther PPK/S was also discontinued in Germany, it too was added to the US manufacturing program – and, like the test guns, just re-imported to Europe.

How does the US-made Walther PPK shoot from the Ransom Rest?

First, the accuracy check, unusual for pocket pistols, was made from the Ransom Rest. The five-shot groupings at 15 meters were so impressive that the test was repeated with some loads at 25 meters. The results are sufficient for average sporting pistols. All the loads' groups at 15 meters far exceed the accuracy needed for normal use. Accuracy-wise, nothing beats a barrel fixed in the grip. Just remember that results from a shooting machine are rarely repeatable by hand. Fired handheld, neither of the two models tested – a black PPK and the PPK/S Stainless – had any malfunctions. The PPK/S, even hand-held, had a slight high shot at 5 meters, and at 15 meters the impacts were about spot on. The small black counterpart shot similarly. Depending on the load, a few inches of deviation from the previous point of impact occurs. Neither pistol showed any weaknesses except for the filigree sights. Under poor lighting conditions, especially with the bright version, there is no good contrast despite the red dots.

The gelatin blocks we shot at with different loads using the PPK and PPK/S.

...compared to the 9mm Luger? Only on the (patient) paper! Performance data published on the net or on the backs of ammunition boxes usually result from 150-mm barrels and 100 to 120-mm barrels of pistols used by LE or the military. The 9 mm Luger offers considerably more power – but only from a longer barrel than the one tested.


Including the chamber, the barrel should be about 100 millimeters, otherwise much of the 9 mm Luger's potential is wasted before the muzzle. If a pistol the size of the Walther PPK is required, the .380 ACP can certainly score points over the 9 mm Luger. With its DA/SA trigger, an accurate hit is easier to achieve than with DAO or a partially preloaded striker-fired action with a long trigger pull. In terms of performance, the Walther PPK is heavy by today's standards, but when firing it is easier to control than similarly sized 9mm Luger caliber pistols. The new PPK is still on par with modern developments because of its ingenious technical concept.

After a long wait, Walther is once again shipping the small PPK and PPK/S legends, albeit no longer from Germany, but now as a re-import from the US subsidiary production. The manufacturing quality of the four test pistols was extremely good, there was nothing to criticize, the fixed sights were just "state of the art" in the past – an adjustable or at least driftable rear sight was conceivable, but more complex and therefore more expensive. All four are certainly no bargain at the unit price of 949 euros, but those who are more interested in collector's value and German manufacturing will find similar or, depending on the design and thus degree of rarity, much higher prices on the market. Walther's PPK and PPK/S are back, they are still up to date and worth their money.

The Walther PPKs came directly from the manufacturer Carl Walther. The ammunition for the gelatin test was supplied by the following companies: Albrecht Kind (Magtech), Helmut Hofmann (Hornady) and GECO (Action Extreme) – thank you!

Subscribe to the Newsletter
This article is also available in this language:
DEIT
Click here for more information on the topics:
Walther.380 ACP (9 Short)9x19 mm (9 Luger)
That might interest you too: 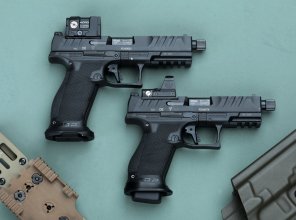 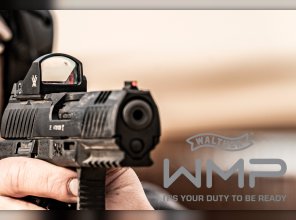 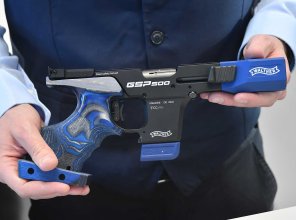 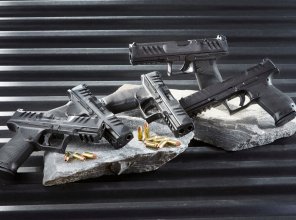 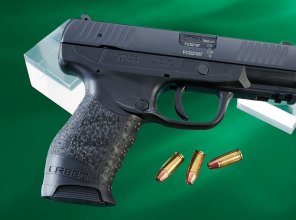