The safest handgun is...

Are semiautomatic pistol safe or not? Or is the user the weak link in the firearm safety chain? Let's discuss about it

Rivers of ink have flowed about safety in guns, especially handguns, with every expert or simple practicioner having his own, often very strong, opinion on the matter.

I therefore don’t pretend to state any “absolute truth”, but here are some considerations worth pondering on carefully. 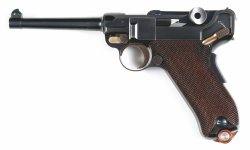 James D. Julia Inc.
From a James Julia auction catalogue a nice Parabellum 1900 first serie, one of the first semiautomatic pistols, with both manual and automatic grip safety

Let’s forget for a moment about rifles, for several reasons: first because muzzle control is easier on guns, which makes them marginally safer, second because all rifles have more or less a manual safety of some kind, third because very few people carry a rifle for self defense, while the majority of civilians will be carrying a handgun for such purpose.
Now, as we well know, handguns come with all kinds of manual and automatic safety combinations.

Most early semiautos had manual safeties that had to be disengaged to allow the gun to fire, and re-engaged to make them safe again.

Some had early types of “automatic” safeties, the simplest and most common of which was a grip safety.
More modern designs resorted to different solutions, with various degrees of success. 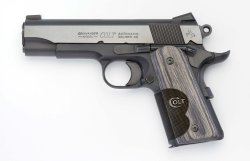 One of the most successful and iconic handgun is the Colt 1911. After more than 100 years is still an affordable pistol

A classic example of the first kind is the evergreen 1911.
The 1911 is a single action only handgun, meaning that to fire it, you have to cock the hammer, either by cocking it on a loaded chamber, or by racking the slide chambering a live round.
In this condition, a very slight pressure on the trigger, which has a very short travel, will cause the hammer to drop, and the gun to fire. Naturally this condition was considered quite dangerous, so various safety measures were incorporated into the handgun’s design.

First was a manual safety, which lays comfortably under the thumb of the shooting hand. A slight flick down and the gun is ready to fire, a slight flick up, and the gun is safe again. This mechanism is simple enough but requires a lot of training to become ingrained so that the shooter can use it under stress. Since the 1911 was initially meant to equip cavalry units, and the eventuality that a gun could be dropped was far than remote, the pistol was also given an automatic grip safety: unless the weapon was firmly grasped by the shooter’s hand, the sear was locked in place so that, even if dropped, the handgun wouldn’t go off accidentally.

The 1911 was meant for the famous “condition one” or “cocked and locked” carry mode, which allows to bring the gun into action very quickly. If one remembers to flick off the safety switch. 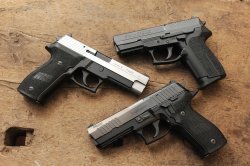 Double action pistols, where the first round requires a long, heavy pull, often do away with the manual safety altogether. A good example is the SIG P229, with its decocking lever meant to safely bring down the hammer on a loaded chamber.

This solution is meant to insure maximum readiness of the gun, as the shooter only has to draw the gun and squeeze the trigger to fire it. 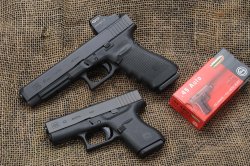 When Glock pistols first appeared on the market back in 1980, some "experts" were quite skeptic on lack of manual safeties

Another example of such design are the world famous Glock semiautos.
Glock solved the problem of having to fire the first shot in a different mode than the rest with its striker fired percussion mechanism, wich has a comparatively light trigger with a long travel, and introduced three different safety systems: the automatic safety that locks the firing pin, a trigger safety that impedes trigger movement unless the shooter’s finger is placed on the trigger itself, and a locking detent that stops the firing pin from reaching the primer even if the automatic safety should fail.
As with the P229, the gun has no manual safety at all, and all one has to do to fire it is to pull the trigger.

After several accidents happened, the Glock was deemed by many an “unsafe gun” due to its lack of a manual safety. A closer look at these accidents, however, shows that none (not even a single one) were “accidental discharges”, i.e. the gun going off by itself, but negligent discharges: somebody pulling the trigger of the gun when they weren’t supposed to do so.

The main argument against pistols without a manual safety is that it’s easy to fire them accidentally, so many prefer designs such as the battle proven Beretta M9 / 92FS, which although being a double action semiauto with an automatic firing pin safety, also sports a slide mounted manual safety like that on the WW II Walther P38. 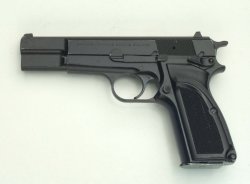 Magazine safety, like on Browning HP pistol is not one of author's favourite

Another kind of automatic safety meant to avoid accidents is the magazine safety, like on the Browning HP, which disconnects the trigger from the action unless a magazine is inserted into the magazine well. This purportedly should avoid the typical rookie mistake of believing a semiauto to be unloaded when you have removed the magazine (forgetting the chambered round ready to go off as soon as the trigger is pulled).

So, who is right among all these design phylosopies? Which of these is the “safest” gun?
It’s not that there isn’t a good answer: it’s just that this isn’t a good question.
It all depends upon which use you mean the gun for. 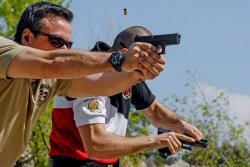 But before venturing there, a simple concept must be made utterly clear: the function of a safety is to protect the user and nearby people from a mishap. It is not to protect against mishandling and unsafe behavior.

That is the shooter’s own responsibility. Anyone getting a gun should train diligently in its safe handling and in the proper storage precautions to avoid unqualified people can access it, for no manual safety will protect you from irresponsible handling of a gun. Sad proof of this statement can be found all too frequently in the news.
So, we will assume the shooter is adequately trained in safe handling procedures.

Even if I don’t completely agree on this, I’ll concede that for target shooting and the training of rookies in target shooting, manual and magazine safeties may add a further safety layer which can help avoid accidents (actually, in many target shooting ranges a safety isn’t needed at all, as the guns should be left unloaded on the bench while not shooting).
But when you plan to use a gun for self defense, things change.

While some believe that a magazine safety is useful in training, I believe that relying on such devices may ingrain bad habits. Better to start off on the right foot and train correctly, and have a gun that can shoot a chambered round while doing a tactical reload if the need arises.

It’s true that chances of this happening are slim to none, but better have the option and not need it, that needing it and not being able to do so because the gun won’t shoot to prevent unsafe handling that should be ruled off by proper training in the first place.
The manual safety on guns that are not single action only is no different. A Beretta M9 is perfectly safe with its safety off. It can be dropped, shaken, hit with a hammer and it won’t go off, unless the trigger is pulled.

What the M9 manual safety unfortunately sometimes does is getting switched on accidentally when racking the slide, without you realizing it. Happened to me personally once and several times to people I know, luckily at the range, not in a real SHTF scenario…
Beretta redesigned the lever for the PX-4 and for the new M9A3, but that’s a nice solution to a problem that shouldn’t be there in the first place: even with double action guns which don’t share the M9 slide mounted safety lever, still one could forget to disengage the safety. It has happened.  No wonder that some agencies asked for a version where the slide mounted lever acts as decocker only, called the 92G. 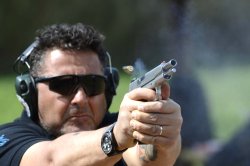 The safest gun is the one which, when you need it to shoot, does so unfailingly, every time you pull the trigger

To a trained shooter who means to use a semiauto for self defense, the gun is an emergency safety device, and one he may need without much forewarning and in situations where complex procedures become extremely difficult if not impossible to perform.

In such circumstances, the answer to the question above becomes very simple indeed: the safest gun is the one which, when you need it to shoot, does so unfailingly, every time you pull the trigger.

It’s up to you, the user, to make sure you fire the gun only when you have decided to do so, and that the decision was taken in the appropriate circumstances, because let there be no misunderstanding on this point, it is you, not the gun, that will be held responsible for the consequences.

Subscribe to the Newsletter
This article is also available in this language:
IT
Click here for more information on the topics:
Semiautomatic pistolsBerettaBrowningColtGlockSIG Sauer