Test: GSG 1911 ADOPS and Colt Rail Gun rimfire pistols – Both are damn close to the US original, but cheaper...

1911 pistols have always been popular sporting pistols around the globe. Even in the rimfire sector, numerous manufacturers offer versions of the popular US classic: the same shooting feel as the .45 model, but cheaper cartridges. We have tested two tactical 1911 interpretations from German manufacturers here – One of them even has the blessing of the original manufacturer. 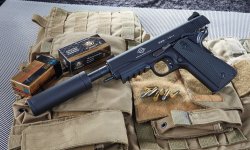 John Moses Browning's Colt M 1911 pistol design is probably one of the most famous of its kind. After all, the handgun served as a service pistol in the US Army for well over 70 years, and after the Second World War, with increasing success, it had a second career in the holsters of numerous sport shooters. In the past decades, several manufacturers have dedicated themselves to the licensed reproduction of the classic from the USA. For a long time now, this has not only applied to the centerfire models. Today, numerous international manufacturers offer rimfire pistols based on the 1911 design. The Italian company Chiappa Firearms, for example, offers six rimfire 1911s, the Philippine manufacturer Armscor also offers rimfire 1911s within its XT series, and Browning, a subsidiary of the Belgian Fabrique Nationale Herstal, even produces several dozen versions of rimfire Governments. The numerous other companies specializing in 1911s in .22 LR caliber or corresponding conversion kits can't be listed here. In Europe, two German manufacturers have also devoted themselves to the rimfire offshoots of John Moses Browning's original design. The Ulm-based manufacturer Carl Walther currently offers three rimfire 1911s licensed by Colt, and German Sport Guns (GSG) has seven different versions of the classic.

Many 1911s in .22LR are available: but what do GSG and Colt do differently? 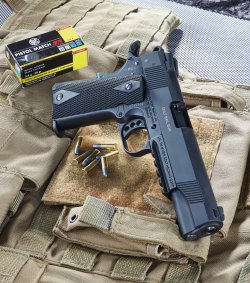 © Marcus Heilscher
The Colt Rail Gun made by Walther is licensed by the US manufacturer, who even delivers the pistols in the original Colt case.

Walther currently offers three Colt-licensed rimfire 1911s, but they are noticeably different in appearance and features: the 1911 A1 is a clear homage to the early classic and features an external hammer, the short stubby thumb safety and the tiny but traditional sights. For 419 euros, you got a machined aluminum slide with the straight and longitudinally set serrations. The 1911 Gold Cup emphasizes sport shooting and is probably meant to remind us of the legendary sport Colt guns (hence the "Trophy"). With skeletonized trigger and hammer along with now adjustable target sights, nothing stands in the way of target shooting. With a price of 439 euros, it is the most expensive of the bunch.

The 1911 Rail Gun is the test gun. It is clearly tactically oriented. We will look at it in detail below. The most affordable entry into the 1911 GSG world is the 369 euro Standard model. The pistol already has a skeletonized trigger and hammer, a trigger stop and the customary grip safety. Many of the GSG 1911s already let you know from the name what features they come with: The Wood, for example, features wood grip panels; the Stainless comes with a slide with a partial Stainless look; and OD Green and US Tan come up with corresponding frame and slide colors. The top models in the range are the tactical ADOPS (our test gun) and the sporty Target, which comes with extended and ergonomically shaped wooden grips and adjustable sights, both for € 399.

Colt Rail Gun and GSG 1911 ADOPS: what are the differences?

At first glance, the two black 1911 pistols appear to be full-blown Governments. Even held in the hand, the two rimfire plinkers with their unloaded weights of 948 grams (Walther) and 992 grams (GSG) feel almost as heavy as an original Colt 1911 – which weighs only about 10 percent more, depending on the version. But the weight is distributed quite differently in the rimfire guns. The light metal slides of both pistols are much lighter than the steel slide of a centerfire 1911. Corresponding to the slide and the weaker .22 ammo, a completely different action is also used, which must convert significantly reduced forces when firing. While modern sporting 1911s in .45 ACP operate with bullet energy values of 400 to over 500 joules at the muzzle, the .22 LR delivers a significantly reduced energy of around 80 to 160 joules in the test guns. The delicate and completely differently constructed .22 LR cartridge also demands adjustments in the action – no wonder, the original Browning short recoil operation had to be redesigned for rimfire use.

And both .rimfire 1911s solve this in their own unique way: a single-action trigger and a hammer-fired action are common to both test guns, but there are major differences in the barrel and the operating system. The Walther's barrel and chamber are rigidly fixed to the steel frame. The spring and guide element are located underneath. The guide element is not a rod as in the original, but a construction that engages through a pin in a recess in the frame. The spring has a plug. This and also the bushing which guides the barrel in the muzzle area, are taken from Browning's design. There is also a slide stop as in the original design, but it does not engage in a barrel link and thus does not have the same function as its centerfire counterpart. In terms of design, the Walther Colt's system is a blowback operation in the broadest sense. 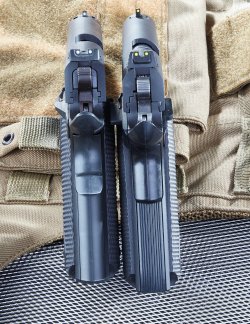 © Marcus Heilscher
The tactical sights are compact. However, the rear sight of the GSG ADOPS (right) is significantly higher than that of the Colt Rail Gun. 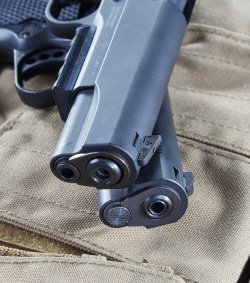 © Marcus Heilscher
Both the rimfire 1911s use a barrel bushing in the muzzle area.

The biggest difference between the two pistols is the way the barrel works: in the GSG ADOPS, the barrel is not a fixed element of the action and is not attached to the frame, but it is held – in Browning's style, so to speak – by the slide stop, albeit in a complicated way. In addition to the slide stop, in fact, a fixing pin also engages the barrel assembly. To disassemble the gun, these two and an additional screw in the frame must be removed. Only then the slide can be removed from the frame. The 5”/127 mm barrel features a thread cap at the front, which must be removed to mount the included fake suppressor. The barrel is guided in the slide by a bushing, and the recoil spring is also supported by a plug at the front and a plastic guide rod at the rear. All in all, both pistols have only some elements of the old Browning system (bushing, plug, recoil spring, slide stop), but as said even the slide stop does not have the same function as in the original. Especially because of the complicated barrel attachment of the GSG system, we like the simpler Walther solution better. When it comes to the equipment of the two guns, the GSG has the edge.

On the shooting range: Colt versus GSG, who will win? 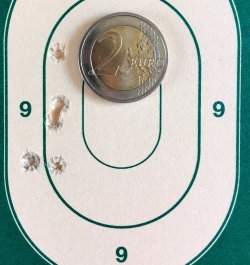 © Alexander Orel
The tightest grouping was delivered by the Colt Rail Gun delivered. Diameter is 1.45”/37 mm.

We take the rimfire 1911s to the 25-m range for testing. Thanks to their 1911 metal frame, both handguns can normally be clamped into the corresponding adapter of the Ransom shooting rest. However, the protruding hammer spring housing and other features of the GSG-ADOPS frame did not provide a proper fit in the clamped adapter inside the Ransom rest. Therefore, both guns were fired from a Heymann Guntester. Government shooters, of course, immediately notice that this is not like firing a 1911 in .45 ACP. The light recoil springs and the small aluminum slide alone do not give an original Government feeling. However, the hand position, grip angle and the remaining controls fit wonderfully and are convincing on both pistols. The trigger of the Walther/Colt Rail Gun, which has a pull weight ot 2339 g, is quite crisp, but is much too heavy for sporting shooters. The GSG is much better at this. its single-action trigger with a value of 1599 g can be described as – as already mentioned – sporty. A minimal creep in the trigger pull could be detected. The tall rear sight of the GSG ADOPS may be suitable for (fake) silencer use, but it is less suitable for the shooting range. The rattling thumb safety should also engage and operate a bit more precisely. Nevertheless, both handguns can impress on the shooting range. They worked absolutely trouble-free and this also with weaker loaded factory cartridges, although the GSG refers to the use of HV ammunition on its slide.

Test wrap-up and the central question: which rimfire 1911 brings more? 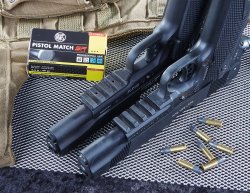 © Marcus Heilscher
The tactical 1911s naturally come with with accessory rails. The GSG rail (left) is made of plastic.

Verdict: the test duo of the 1911-style pistols in 22 LR showed decent function and accuracy in the test. The Walther is much easier to disassemble and the concept of a rigid barrel connected to the frame is convincing. The GSG also comes with more features at a lower new price. Its fake silencer, however, has only an optical function and its workmanship looks rather cheap. In addition to the smooth trigger, the GSG got a bit more energy out of all cartridges. Both pistols come factory in a black plastic case, with two magazines and a little disassembly tool.

Ultimately, then, it's a personal choice between two very well done rimfire 1911 models, both of which we can recommend.