A contribution from Giorgio Brancaglion11/28/2021

The company once known as STI, an acronym for Strayer, Tripp International, was founded by Virgil Tripp and Sandy Strayer in 1980 at the dawn of the IPSC shooting discipline, which we called Practical Shooting, and later Dynamic Shooting. Like a host of other specialty shops, initially STI was in the business of preparing and customizing pistols for sport shooting. In 1983, however, the company began to develop a steel/polymer composite frame specifically for match guns. It was certainly a prophetic intuition, since in those years polymer-framed guns were still a novelty seen with diffidence; the GLOCK 17 had been adopted by the Austrian Army only one year before, while the H&K VP70, presented in 1970, wasan extravagance forgotten by the market by then. 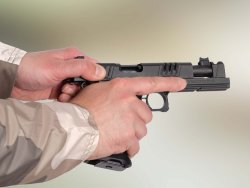 The Staccato XC Legacy features a 5”/127 mm barrel with a fixed single-chamber compensator that reduces muzzle flip by 30%.

STI's frame, consisting of a polymer grip capable of housing a double-stack magazine and a steel insert on which the slide moves, quickly became an unprecedented success, serving as the basis for countless custom pistols, but also and especially STI-branded ones. Over the years the founding members have left the company to devote themselves to other projects. In the meantime STI has established itself definitively in the selective IPSC market as a small but unassailable power in the sporting sector, but with few prospects in the even more attractive – at least in the USA – law enforcement and self-defense guns sectors dominated by giants such as GLOCK, SIG Sauer and Beretta.

STI's turn toward a catalog more oriented to non-competition markets began in 2018 with the joining of Buck Pierson, a former military man with experience in the commercial law enforcement sector, who immediately decided to breathe new life, and new business outlets, into the company's guns.

“When I first started, STI had no skin in the game when it came to the law enforcement realm,” Pierson said in an interview. “I found that odd because when I first experienced the STI 2011, my first thought was I wish I had a pistol that shot this damn good throughout my military career.”

One of the first things Pierson did in his new position was to ask how many police departments carried Staccato pistols. When the marketing director at the time told him there weren't any, that conversation started the wheels turning in his mind. 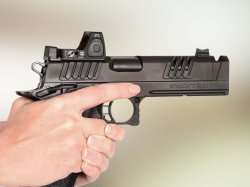 Not long after that, both the US Marshals Special Operations Group and the Long Beach Police Department SWAT contacted Pierson within days. He offered to meet with each agency on the range to assess their needs. With no dedicated law enforcement model at the time, Pierson brought in two models – the tactical double-stack 5.0 and the tactical double-stack 4.0 – to get feedback on each. By this time, Long Beach SWAT had been testing a variety of other makes and models for nine months.

"Within one range day, all of them except one [sniper] wanted our [4.0] gun,” Pierson said on the Primary & Secondary podcast. "The response from the SWAT Team was unequivocal: “It was an almost overwhelming response of, ‘This thing shoots better than anything we’ve been testing for the last nine months. Let’s continue forward with this.’”

In the world of law enforcement things happen fast, and in February 2021 the company announced that more than 280 police agencies in the US had approved Staccato pistols for departmental use. Today, that number has reached 325, including the Texas Rangers, Los Angeles Police Department, Las Vegas Metropolitan Police Department and Los Angeles County Sheriffs.

Let's now take a closer look at the Staccato XC Legacy, which is the manufacturer's flagship in the Personal Defense and Law Enforcement pistol segments. Built on the 1911 platform, the XC Legacy is a single action semi-automatic pistol chambered in 9mm caliber with a composite polymer/steel frame and a double-stack magazine with a capacity of 17 rounds in the standard version or 20 rounds in the extended version. It is therefore a full size gun with a five-inch barrel (127 mm) featuring a single-chamber compensator that ensures a reduction of muzzle flip and felt recoil of 30%. The slide is ready to mount a Leupold Delta Point Pro, a Holosun 508/509 or a Trijicon RMR red dot, in a low position so that it can co-witness with the iron sights, which are a tactical set by Dawson Precision (a US specialist in combat sights) with fiber optic inserts. Mounting plates for other red dot sight models are also available. 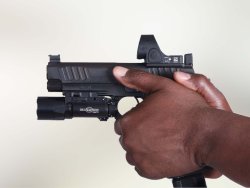 The Staccato P, a more compact version of the XC Legacy, with a 4.4" barrel. The metal section of the frame can be steel or alloy.

The stainless steel slide has front serrations that not only facilitate cocking but also slightly reduce the overall weight of the assembly. Great attention has been paid to the trigger, which has a pull weight of 2 lb/900 grams – a match pistol value. The Staccato XC Legacy offers the user an automatic safety on the Wilson Combat-type grip and an ambidextrous thumb safety on the frame. The grip areas of the frame itself are textured with a pattern that ensures maximum gun grip even while wearing gloves or with wet hands. At the base, a magwell favors extremely quick magazine changes while on the dust cover we find the usual rail for the mounting of accessories. The gun is DLC finished, or "Diamond Like Coating", a type of surface treatment that ensures maximum resistance to weathering and abrasion. Contrary to today's trend with a continuous flourishing of greenish and brownish guns, the Staccato XC Legacy is only available in an austere matte black color.

The Staccato XC Legacy is a classic example of how in US professional defense circles the 9 Para pistol has been willingly accepted, also thanks to the effective hollow-point cartridges available on the US market, while it is still a bit difficult to break away from the well-tested Colt 1911 platform. Moreover, Staccato guarantees the perfect cycling of the gun using quality ammo with bullet weights between 115 and 147 grains. Surely, the Legacy will delight those who have not yet digested the frenzy to offer  on the market striker-fired pistols with plastic frames. Let's now come to the sore point, that is the cost: the price tag of the Staccato XC in the basic version reaches 4,299 US dollars, corresponding to about 3,800 euros. That's serious money, but if we consider that the gun was born  in the US as a working tool for special forces, which often have high budgets, we won't be too judgemental in this respect.

Subscribe to the Newsletter
This article is also available in this language:
IT
Click here for more information on the topics:
Pistols9 mmGECO
That might interest you too: