Among the countless Colt Government 1911 manufacturers across the world, Remington, with a production of over 20,000 guns in the final period of the First World War, is probably in the best position to reproduce this legendary handgun 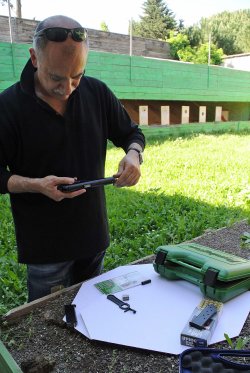 The Remington company, which during the First World War manufactured 21,677 1911 Government Model pistols under license from Colt, has recently joined the group of manufacturers that are currently reproducing this legendary weapon.

On the occasion of the centennial of this weapon, after a 90-year pause in which this company stopped producing it, and much to the delight of its fans, the factory based in Ilion NY has finally resumed manufacturing the “fortyfive” par excellence.

The Remington 1911 R1 model, of course, is not a perfect replica of Remingtonʼs wartime weapons. It features small but significant changes, which have been made both to adjust to the evolution of combat strategies and to improve the mechanics of the weapon. Although hardcore fans believe that the weapon had to remain exactly the same – like the one Browning had designed – the modified sights of the R1, together with an additional safety catch to the firing pin and a super accurate coupling between barrel –base pin bushing – slide allowed the weapon to achieve a great firing performance. 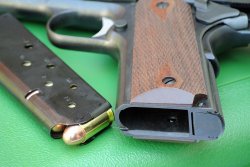 Magazine insertion, with respect to the original model, has been made easier by a light countersink right at the entrance of the mag well. The ejection port was also enlarged in order to make the weapon more reliable and prevent malfunctioning – the latter was often the case with older models, which also required the use of 230g Full Metal Jacket ball ammunition, the so-called hardball.

With respect to the original model, the snare ring which was originally placed on the hammer spring housing has been removed.  A small notch has been bored on the barrel to allow visual check for the presence of a bullet in the chamber. 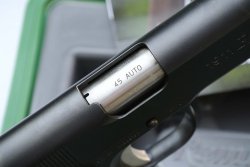 Bruno Ardovini
On the ceiling of the breech end of the barrel, a notch allows visual check of a live round in the chamber

In our opinion, however, the hole is too small and under unfavorable light conditions these checks cannot be reliable.

The handgun is equipped with a modern machined alloy trigger. Its squared edges somehow clash with the weapon design. The milled chestnut grip plates are quite nice and feature the traditional double diamond design.The barrel and the slide of the Remington 1911 R1 are made of blued carbon steel. The barrel and the bushing are made of stainless steel. The barrel length is 127 mm. Like early Colt models, the housing of the hammer spring is of a straight type, while the automatic safety on the grip has the usual configuration. 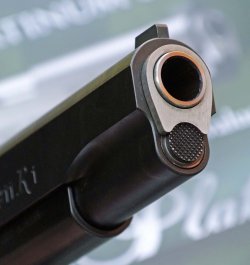 The main recoil spring rod is of the short type. The machined notch on the frame, where the hold open slide stop lever operates, interrupts the slide guide (as in all most recent models).

The Colt 1911 and the Remington R1 – which are more or less the same weapon – still retain a unique design, which up to now has not been matched neither in terms of mechanics nor esthetics by any other weapon.  Beyond that, in spite of the fact that this gun was not designed with an eye for ergonomics, it turned out to be quite a comfortable weapon to handle. With the help of a single stack magazine, which reduces the width of the grip, controls are easily reachable. Aiming at the target, thanks to the well-chosen grip angle, is very simple and intuitive. 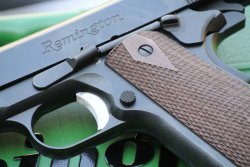 Bruno Ardovini
All controls are as the original, except the trigger, left unblued

The gun is a single action semi-automatic pistol with external hammer. It was built upon the good-old reliable Colt breech locking system, short recoil operated, which is enacted through the locking lugs placed on the top of the barrel and under the ceiling of the slide. The movement of the different parts is controlled by the connecting rod pivoted to the barrel and secured to the shaft through the bar of the bolt lock. When firing, the kinetic energy of the recoil pushes the barrel and the slide a few millimeters back – throughout the process they remain locked with the help of the lugs of the barrel and the notches made ​​on the top of the slide. After this short travel, the connecting rod forces the barrel to stop and rotate downwards, thus disengaging the slide from the lugs so that it can keep on moving and extract, through the use of the extractor, the spent case, and compress the main recoil spring. At the end of the process, the spring pushes the slide back to its locked and firing position. During this movement the feeding rib strips one cartridge out of the magazine and chambers it, so that the gun is ready to fire its next shot. 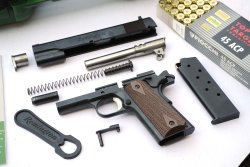 Bruno Ardovini
The 1911 R1 field stripped. The tight bushing requires the use of the wrench in the lower left hand corner of the photo

Disassembling a Colt 1911 requires a bit more effort than performing the same task on modern models. However, with some practice, this operation can be easily carried out by anyone – most of the time it does not even require any tools. In order to disassemble a Remington R1, at least at the beginning, you need to have the right wrench to rotate the bushing of the barrel.

After making sure that the gun is unloaded, the appropriate wrench helps to press the tube holding the spring. This will let the milling of the barrel bushing loose, so that it can be rotated to the right side of the weapon and leave the tube free to move. The recoil spring and the tube can now be removed, being careful not to let it out of control – the spring is strong and under tension.  You then can pull the slide back until the internal edge of the “hold open” lever fits with the milling of the slide itself. The hold open lever can be removed by pressing the bar head of the stud leaning on the right side of the stem. You can now separate stem, slide and the spring rod. In order to extract the barrel, which must be pulled out from the front when the connecting rod is lowered, you must have removed the bushing with a bayonet type clutch. The bushing can be extracted from its lodging by rotating it to the left side of the weapon. 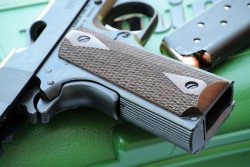 Bruno Ardovini
The butt end of the grip is very traditional. The main spring housing is straight

Like any other Colt type of weapon, the Remington has both a manual safety – which can be activated only after the hammer has been armed and which blocks the trigger chain – and an automatic safety on the grip which prevents shooting by blocking the trigger until the weapon is not in the hands of the shooter.

The Remington R1 model has a firing pin safety which was first introduced in the Colt series 80 models. Although it is certainly a useful feature for a defense gun, the automatic firing pin safety has been heavily criticized by some “extremists”, who claim that the friction generated by the components of this type of safety would decrease accuracy and trigger quality. 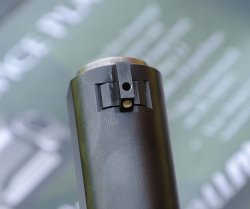 Bruno Ardovini
The front sight is mounted with a dovetail on the slide, and is kept in place with a set screw

The hammer is equipped with the half-cock position, an additional safety preventing the contact of the hammer with the head of the firing pin, improving the resistance against accidental release. Two pressed steel magazines with a  welded floorplate are also included. The 7 round magazines can be checked through the control holes on the side of the magazines themselves.

The Remington 1911 R1 gun is a high-quality weapon and can also provide hours of entertainment at the shooting range.  Its precision largely owes to its well-tested mechanics and to its .45 ACP cartridge, which is fairly accurate. 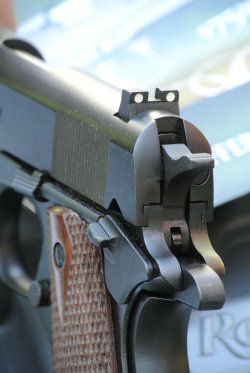 Bruno Ardovini
The rear sight, of better quality than the original allows to achieve tighter groups

The Remington R1 is also an excellent weapon for house defense – the caliber used, which was also tested on the battlefield, can solve many different problems. Considering weight, size, and the need to carry a "cocked and locked" weapon with the manual safety catch on, self-defense gun license for this weapon is recommended only for those who are familiar with such systems.

The recoil of the .45 ACP cartridge is always pleasant and gives a feeling of power instilling self-confidence in the shooter. Even those people who have never shot with a Colt would rapidly grow accustomed to this kind of weapon – many of them ending up picking it as their weapon of choice. We were able to get solid shooting groups in just one hole within  a 15 m distance. The soft release of the model which I had in use – and which had already shot over a thousand rounds-  certainly helped, in spite of those people criticizing firing pin safety. No jams whatsoever occurred during the live fire test. 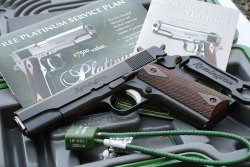 The Remington 1911 R1 is sold in a durable green carrying case.  Two magazines are supplied together with the weapon, in addition to a wrench for the disassembly, a storage lock and a comprehensive instruction manual. The tested weapon has totally satisfied us. It is of high quality, it has shown great accuracy and has a trigger quality which could be used for sport competitions. Overall, the Remington 1911 R1 has an excellent price/ quality ratio and scores far better than many other clones currently available on the market.