The latest addition to the exclusive SIG Sauer's Legion series is a carry-size pistol in .45 Auto featuring a 3.9”/99 mm barrel and stainless steel slide and alloy frame. Finished in a proprietary Legion gray coating, it sports a single action only flat trigger and Electro-Optics X-RAY sights for high day/night visibility.

A contribution from Piergiorgio Molinari09/10/2020 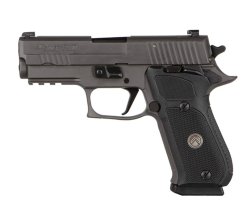 A carry-size .45 caliber, Single Action Only (SAO) version is the latest addition to SIG Sauer's exclusive Legion Series pistols. The new P220 Legion Carry SAO is a hammer-fired pistol, featuring a 3.9”/99 mm barrel and stainless steel slide and alloy frame, with X-RAY3 Day/Night Sights, single action only flat trigger, and ambidextrous manual safety. More than this, as stated by SIG itself, It's “an enhanced version of the gun that started it all for modern day SIG”.

“The introduction of the P220 Legion CARRY SAO is both a unique and exclusive opportunity and brings several firsts to the market for our Legion Series pistols. Most notably this is the first introduction of both a carry size pistol and the availability of a .45 caliber for a Legion Series pistol,” explains Tom Taylor, Chief Marketing Officer, and Executive Vice President, SIG Sauer, Inc. “Additionally, this is a rare opportunity to either become a member of the exclusive SIG Sauer Legion or expand your collection as a current Legion member, due to the fact that this is a limited run pistol.”

Finished in a proprietary Legion gray coating and featuring custom black G-10 grips with Legion medallion inset, the P220 Legion is characterized by its SAO flat trigger and ambidextrous manual safety. The SIG Sauer Electro-Optics X-RAY sights ensure high day/night visibility, while the front cocking serrations provide greater purchase for easy slide operations. The guide rod is solid steel. The P220 Legion Carry SAO also includes a reduced and contoured Elite beavertail for a higher grip and a reduced profile. A more aggressive front strap checkering and additional checkering under the trigger guard enhance the grip. The X-Five undercut applied to the trigger guard allows for a higher grip and greater control too. The P220 Carry Legion SAO comes with three 8-round magazines.

Subscribe to the Newsletter
This article is also available in this language:
IT
Click here for more information on the topics:
SIG SauerPistolsSemiautomatic pistols
That might interest you too: