Conversion kits that allow users to transform their semi-automatic pistols into a sort of carbine with front grips and telescopic and/or adjustable stocks have been on the market for several years now. With its Apex model, the U.S. Meta Tactical company goes even further, allowing to transform a Glock into a real carbine, thanks to a 16”/40.5 cm barrel.

A contribution from Giorgio Brancaglion04/01/2022

One of the reasons that led to the birth of pistols exoskeleton, or "conversion kits", is the Israeli gun law which, contrary to common belief, is extremely strict and limiting to private citizens. The not many gun license owners can possess only one semi-automatic handgun, while having a long gun is even more unlikely. Therefore, the possibility of transforming a legally owned pistol into a kind of carbine becomes very attractive. In 2012 the Israeli authorities finally approved the legal use of this kind of accessories that, thanks to their effectiveness, have rapidly spread throughout the Free World. But a distinction must be made: almost all the conversion kits on the market offer just ergonomic improvements. They allow you to shoot more accurately because the gun is firmly held in the front and rests on the shoulder thanks to a stock. But in fact the pistol is still the same and the maximum accuracy of the gun/exoskeleton combo depends totally on the first component. 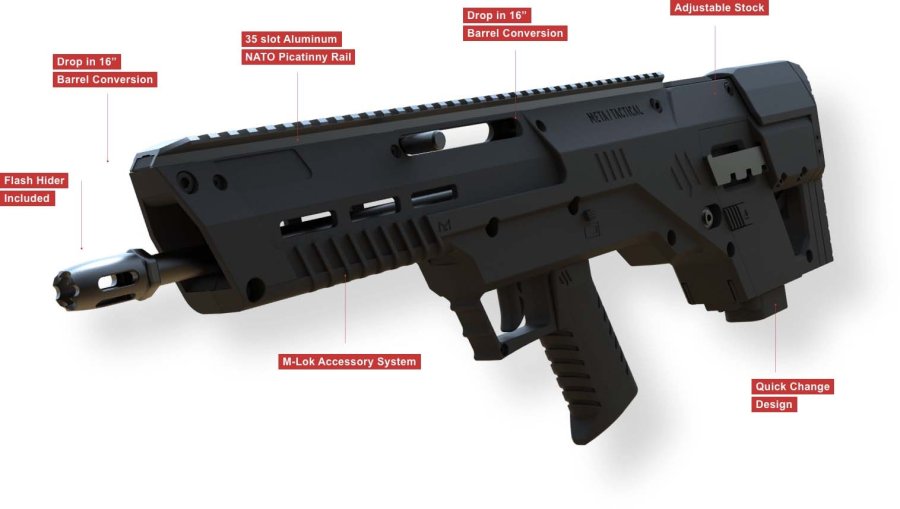 Some of the highlights of the Meta Tactical Apex conversion.


The Meta Tactical Apex conversion kit, on the other hand, involves replacing the barrel of the Glock pistol with one that is a full 16”/40 cm long, and this has predictable positive effects on accuracy at ranges beyond the average defensive shooting distance. As a matter of fact, the conversion can be compared to a rifle or a shotgun in bull-pup configuration: the Glock pistol is set extremely far back inside and its grip is completely enclosed within the outer shell. Unlike more common conversion kits, such as Hera Arms's and Roni's, where you have to operate the pistol trigger to shoot while holding the pistol grip, on the Apex conversion kit grip and trigger are independent. The slide is also cocked using a handle located above the barrel. Mounting the kit is simpler than it might seem. You must first remove the original barrel from your Glock pistol replacing it with the 16-inch one, then you insert the pistol into the chassis from the rear, a bit like inserting the gun into a holster. At this point you insert two through pins and screw the flash hider included in the kit on the muzzle, which is threaded. Now the carbine/pistol is ready to use. On the upper part of the chassis there is a full length Picatinny rail that allows for the mounting of flip-up or red dot sights. Stock length can be adjusted at the push of a button, while the M-LOK accessory system allows you to accessorize the handguard to your liking.

From a legal point of view, in the USA this conversion does not present any problems, since once installed it brings the overall length of the gun to 26 inches (66 cm), thus legally transforming it into a semi-automatic carbine without incurring in violations of any federal law. In Europe, it could be difficult to purchase the kit since it also includes the barrel, which is obviously of a different length from the original pistol's one.

Subscribe to the Newsletter
This article is also available in this language:
IT
Click here for more information on the topics:
PistolsPro-zoneRifles
That might interest you too: