GLOCK will provide service pistols to the São Paulo State Military Police. The guns supplied to Brazilian LEOs will be a specifically developed version of the GLOCK 22 Gen5 in .40 S&W featuring an ambidextrous manual safety.

Good news from Brazil for GLOCK: with a press release, GLOCK America announced that “after extensive testing, the Procurement Service of PMESP – Polícia Militar do Estado de São Paulo (the São Paulo State Military Police) has declared the GLOCK 22 as the winner of its international solicitation”. Fixe thousand service pistols will be provided for the Special Forces CHOQUE, COE, GATE and ROTA. 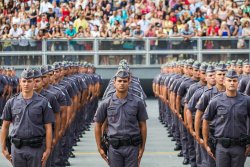 It was the first time that Brazilian law enforcement agencies solicited contenders from international sources, and besides the GLOCK G22 Gen4 at the end of 2017 two other models were still in line: the Beretta APX and the SIG Sauer P320. Last January GLOCK was asked to supply some pistols to be submitted to a full-test program.

The extensive testing for the solicitation included endurance testing, parts interchangeability testing, precision testing, and drop testing from a distance of 2 meters to simulate pistols being dropped from mounted units and was done from six different angles, totaling 64 drops. The endurance testing consisted of 10,000 rounds on each of four test pistols without cleaning or lubrication during the test.  As GLOCK America’s Managing Director Patrick Voller  explains, “All tests were implemented in a very transparent and public manner as any interested party could participate in these tests as observers.” 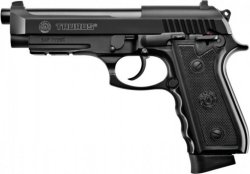 The new guns will replace the Taurus PT100 and PT101 pistols currently in service. In the image, a PT100 pistol.

The new guns will replace the Taurus PT100 and PT101 pistols currently in service. Intriguingly, it seems that all the pistols supplied to São Paulo State Military Police will be a specifically developed version of the GLOCK 22 Gen5 in .40 S&W that besides an ambidextrous slide stop lever and no finger grooves, also feature an ambidextrous manual safety. After the G19 MHS proposed the US military XM17 Modular Handgun System competition, another GLOCK with manual safety?

Forty years ago Gaston Glock introduced his world-famous polymer pistol – the P80 or G17, as we know it. To mark this anniversary the Austrian gun manufacturer is launching an exclusive wristwatch, the GLOCK Watch Chrono, in a limited edition of 4000 pieces. The watch is solar charged and comes in the original pistol case in the anniversary color yellow.

The polymer pistols from GLOCK have now been on the market for around 40 years – and they have been extraordinarily successful there. For one of the world's best-selling handguns, the tuning scene and the aftermarket accordingly offer a lot of accessories. all4shooters.com takes a look at what you can put on your GLOCK.

Sporting a distinctive coyote-colored frame and black slide, the G17 Gen5 is the new French Army service pistol since 2020. That same version is now reaching the European civilian market. Additional features in respect of the standard Gen5 model include luminescent steel sights, a lanyard loop and an extended slide lock. Read price and availability here.

With a yearlong campaign consisting of monthly live videos covering various topics relating to the brand and its involvement in the industry over the past 35 years, GLOCK will engage its fans worldwide. Moreover, each month, participants will be able to register for a chance to win a giveaway along with earning entries for the grand prize that will be announced at the end of the year. 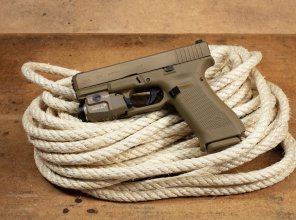 IWA OutdoorClassic 2021 / New from GLOCK: 19X with Streamlight TLR-7AH. Earth brown is the new black and Austrian polymer pistol pioneer GLOCK is launching the popular young model G19X in 9mm Luger in a Coyote finish, in combination with the powerful TLR-7AH gun light in "Flat Dark Earth" (FDE) from US specialist Streamlight. 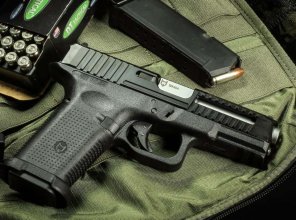 Lone Wolf Arms, one of the leading manufacturers of aftermarket components for GLOCK pistols, launches the compact 9mm LTD19: in the same size range of the GLOCK 19, it features a Timberwolf polymer frame and a redesigned, lightened slide. Six models are available, with nitride or stainless slide finish and gray or black frame.