First Look at the civilian versions: SIG Sauer P320-M17 including availability and prices for US and Europe

While you are reading these lines our all4shooters.com team member Franco is live at SIG Sauer and the SIG Sauer Academy in Newington and Exeter in New Hampshire at the east coast of the United States of America to check out the brand new civilian version of the US Army service pistol.

January 19, 2017: It was the hugest service pistol deal in history when the US Army decided that SIG Sauer with its P320 alias M17 in 9 mm Luger is the winner of the Modular Handgun System (MHS) contract. Already in September 2017 the first M17 pistols were built in Newington and just one month later the first batch was delivered to the US Army. Another month later M17 models were delivered to the legendary 101st Airborne.

Own the real one! Two civilian versions are now available in the US 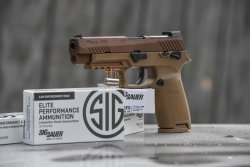 Franco Palamaro, © F.PALAMARO
The new SIG Sauer P320-M17 is the civilian version of the US Army service pistol. Note the controls with black finish.

And now every civilian gun enthusiast has the chance to own this military masterpiece. SIG Sauer offers the trendy polymer-frame-striker fire-action-pistol in two different versions: the standard P320-M17 and the M17-Commemorative.

The slightly differences between this two models are that the ambidextrous manual safety lever and other controls are black at the P320-M17 and coyote tan at the M17-Commemorative. 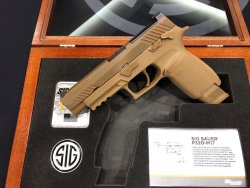 The SIG Sauer M17-Commemorative is a detailed authentic replica of the M17 service pistol for collectors. Note the controls with coyote tan finish - just like the original ones issued to the 101st Airborne.

The replica of the US Army´s M17 service pistol that won the MHS contract is limited to 5.000 units. 650 of them will be reserved to active duty military members of all branches.

The M17-Commemorative is sold in the same cardboard packaging as delivered to the US Army. But there is a special M17 Collector´s Case both for the P320-M17 and the M17-Commemorative. A solid cherry box with dark mahogany stain, a tempered glass top, ab brushed nickel latch and a keyhole back for optional wall-hanging. Slate-grey flocked foam insert with SIG Sauer M17 affixed logo, and precision laser placement cuts for the M17 pistol, certificate and challenge coin. The Case is sold exclusively for 199 $ at sigsauer.com/store.

all4shooters.com has already been "at the range" with the new civilian models of SIG Sauer's M17 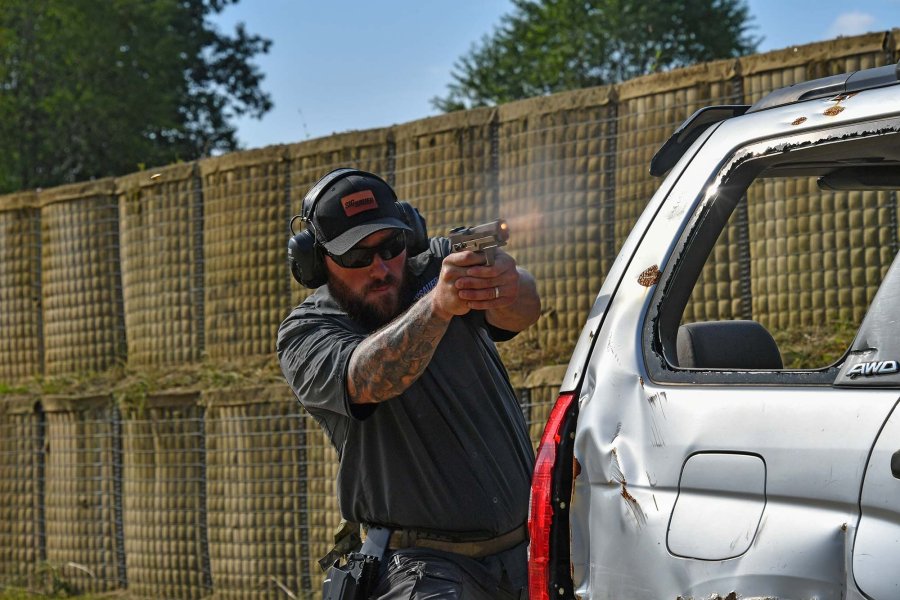 Franco Palamaro, © F.PALAMARO
We had the lucky possibility to shoot the new P320-M17 at the SIG Sauer Academy end of August 2018. Our first impression: Wow! The pistol is pretty accurate.

The original M17 service pistol as well as the civilian models P320-M17 and M17-Commemorative seems to be incredibly accurate. At the SIG Sauer Academy we were able to hit with the P320-M17 and SIG Sauer Elite Performance 115 Grains FMJ ammo four out of five times a 15” steel plate at 82 Yards!

Ron Cohen, President of SIG Sauer USA, explained that the accuracy of the M17 is the result of long time expensive engineering and experience with legendary SIG Sauer pistols like the P226. How the barrel sits in the frame and slide and the geometry of the relationship of these parts are one of the secrets of the fine shooting M17 and its civilian versions.

Additionally the M17 represents over 2 million rounds of testing! It´s winning everywhere: Denmark and Norway just chose it after 10.000 or 20.000 rounds torture tests with submitted guns.

As far as we know at the moment the P320-M17 will be released in Europe early 2019. The retail price will be 1.089.- € and may vary according to VAT of your country. The Commemmorative Edition will not be available in Europa.

Enjoy the video of the live presentation of the SIG Sauer P320 - M17 9mm civilian version of the US Army service pistol on our Facebook: page: https://www.facebook.com/All4shooters/videos/335195333887564/ 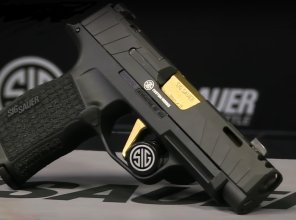