CZ has hit the big time in the IPSC Production and Production Optics divisions: the Shadow 2/Shadow 2 OR models clearly dominate these two divisions of dynamic pistol shooting. This is not surprising, since successful ergonomics and high reliability coupled with an unbeatable price-performance ratio are compelling arguments.

In addition, there are the countless successes that have been achieved with the Czech all-steel pistol in recent years. The Czech manufacturer has long been committed to the dynamic IPSC discipline, as Tactical Sports has been part of the product range since 1996. So it looks as if CZ is once again on the attack with the brand-new single-action all-steel TS 2 pistol that should stand up for itself against the 2011 models that have dominated the standard class to date. 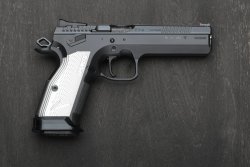 Dieter Licht
The revised TS 2 slide with its outer contour tapering towards the top has been adapted in design to the Shadow 2 series.


Three different models were presented for the future at the online press conference, which also featured CZ team shooter and multiple world champion Eric Grauffel. In addition to the entry-level model for €1750, which was introduced and tested here for the first time, there will also be the TS 2 Racing Green for €2049, which is better equipped in detail, and the top model TS 2 Deep Bronze for €2649 (see also our original news article).

Whether the new TS 2 models, like the Shadow 2, will be available in the young CZ online configurator, so that they can be customized according to individual wishes, is unfortunately not exactly known at the moment. The trio is of course not only available in 9mm Luger, but also in the "IPSC Major Power Factor" .40 S&W caliber.

You can discover the CZ configurator here.

Features of the CZ Tactical Sports 2 pistol in detail 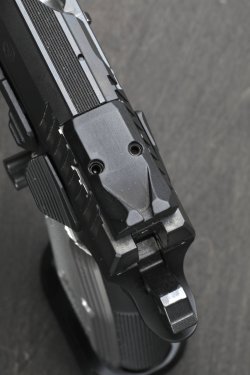 Dieter Licht
The rear sight of the CZ Tactical Sports 2 can only be laterally adjusted and is then fixed with the Torx screws.

A typical feature is the muzzle-length dust cover, which is now angular in profile compared to its TS predecessor. The undercut at the transition area between the front strap and the trigger guard, as well as under the beavertail, are now a bit more pronounced to allow the gun to sink even deeper into the hand for maximum control when firing.

Also new are the recesses on both sides above the trigger, which give the elongated trigger finger better access to the trigger blade. Unfortunately, the trigger blade is made of cheap and elastic plastic, which also applies to the magazine floors. Trigger pull is a low 730 grams with minimal creep before break, but this should go unnoticed, especially in dynamic disciplines. Of course, the trigger is equipped with an adjustable trigger stop. The reset travel of around 1.7 millimeters is short and easily manageable. 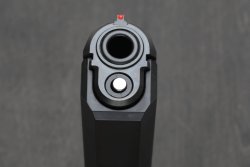 
As with the Shadow 2, the slide contour of the CZ TS 2 tapers upward, which incidentally means 14 grams less mass to move when firing. The total weight is 48.67 oz/1380 grams, a good 1.05 oz/30 grams more than the TS Orange. The moving mass has thus been further reduced, but the overall weight has increased somewhat, which again contributes to a better shooting feel.
To change the point of impact laterally, the rear sight can only be drifted and then fixed with two Torx screws. A point of impact shift in elevation can only be achieved by replacing the fiber optic front sight. In our opinion, this is a bit of a shame, as the less expensive Shadow 2 at least has a height-adjustable rear sight. However, the "Racing Green" and "Deep Bronze" models seem to have a height-adjustable version. Likewise, a left hand thumb rest will be available here, with which many a shooter will achieve greater gun control.

Dieter Licht
Under the trigger guard, the front strap features a deep undercut, and the magazine release button of the CZ Tactical Sports 2 protrudes far.


The safety on the entry-level model has a large thumb lever on the left side only. However, an enlarged safety lever for the right side is also available in the CZ accessories store. In our experience, however, this is not absolutely necessary, since the CZ Tactical Sports 2 can be operated perfectly well even in the standard configuration.

The magazine button sticks out far, so that it already pressed a bit into the author's support hand. Nevertheless, at no time was the magazine accidentally released, although the release resistance was not very high. However, this is also very dependent on the shooter's grip technique and hand size, so other shooters will not even notice this possible, marginal ergonomics problem. 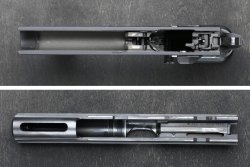 Dieter Licht
Tolerances between the main components on the CZ Tactical Sports 2 are very tight for a pistol in this price range, as are workmanship and finish.


Even if some aesthetes and material lovers may turn up their noses at the rational production of the frame and slide by means of investment casting, it must be acknowledged without envy that CZ seems to have this process perfectly under control. For one looks in vain for obvious blowholes or exposed seams. The frame/slide tolerances were quite tight.

The 5.25"/131 mm long barrel is formed by rational swaging – better known as hammering – and has the typical European twist of 1-10"/1-250 mm. The barrel is guided at the front by a pressed-in bushing. Under the barrel sits the one-piece spring guide rod with plastic buffer. A 13-lb spring has also been fitted here, which represents a good compromise in terms of reliability and good shooting behavior.

If you want, you can also get springs with a lower power in the aftermarket, which promise an even more pleasant shooting behavior. However, based on practical experience, Eric Grauffel recommends not going below 10 lb, otherwise the gun could be too heavily stressed. At least two spare magazines can be found in the hard case.

The CZ Tactical Sports 2 match pistol on the shooting range 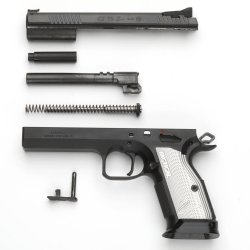 Accuracy testing was done with 10 loads, including two handloads, in the bullet weight range of 115 to 154 grains. The universally known GECO 124-grain Hexagon took first place with 1.30”/33 mm.

The lower-priced Sellier & Bellot 124-grain FMJ secured second place with 1.65”/42 millimeters. On the third step of the podium, the GECO 124-grain FMJ positioned itself with 1.89”/48 millimeters. The arithmetical average precision value of all loads was 2.12”/54 mm. Eight out of ten loads were below the 2.36”/60-mm mark, so the shooting performance level can be considered perfectly adequate for the primary purpose of IPSC/action shooting.

In dynamic drills, the pronounced front weight of the CZ TS 2 was very pleasantly noticeable. Thus, the pistol should also handle very well in .40 S&W. During the test, in which about 500 cartridges were fired, there was no malfunction.

* Mean values out of 10 measurements with the Trigger Scan System

Our conclusion on the Ceská Zbrojovka Tactical Sports 2

The CZ TS 2 family makes a convincing appearance with the entry-level model. As usual from CZ, you get comparatively "a lot of gun for little money". Workmanship, features, function, ergonomics, shooting behavior and accuracy fit. Given the price of 1750 euros, the TS 2 is an absolutely fair deal. If you want more, you'll have to wait for the "Racing Green" or "Deep Bronze" models, which will probably be released shortly.

More information about the Ceská Zbrojovka Tactical Sports 2 can be found on the manufacturer's website.

Subscribe to the Newsletter
This article is also available in this language:
DEIT
Click here for more information on the topics:
CZ (Česká Zbrojovka)9 mmGECOPistols
That might interest you too: