Test: Beretta APX A1, the advanced version of the popular polymer pistol in 9mm Luger

Gun manufacturers are usually rather cautious with successor models of current products. After about six years, Beretta provides the APX with new features. You can read about the differences between the APX and APX A1 here. 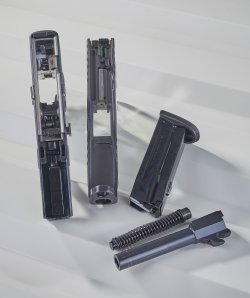 Marcus Heilscher
Beretta APX A1: the disassembly picture reveals the unusually long guide of the slide through the trigger assembly. This is also an essential gun part.

The most striking thing about the "new" pistol first: A1 can also be synonymous with OR, i.e. Optics Ready. A quite long free area of 50.5 mm in length offers enough space even for large red dot sights. At second glance, the now slanted instead of straight slide serrations catch the eye. Afterwards, with a now sharpened eye for small differences, further details or even design changes become clear. For example, the trigger guard has prominent "bumps": in contrast to the smooth predecessor profile, it is grooved on the front. On the other hand, two small parallelograms matching the texture of the grip scales provide trigger finger index reference points. Does anyone now wonder why something so grippy should be in this place? Quite simply: because it fits better in terms of design. And because good design usually comes from Italy. The omission of the finger grooves on the grip front strap is more for practical reasons. While these may give most fingers better control when grasping the handle, some thick or thin fingers grip uncomfortably on top of rather than between the ridges. However, the now evenly continuous front strap is provided with a very rough checkering, which fixes the fingers as if glued without forcing them into uncomfortable contours. What's not noticeable at all, however, is the new coating of the slide, black as night and called Aquatech-Shield. This is supposed to have better corrosion and chemical resistance than conventional coatings or bluing. Also not visible, but only haptically noticeable, is the more defined trigger release compared to the previous model. The typical safety on the trigger blade remains. The extractor claw signals whether a cartridge is in the chamber both visually and haptically. The edge of the claw in fact protrudes somewhat visually and its upper side is colored red and signals "danger".

Beretta APX A1 in 9 mm Luger – Technology features in detail 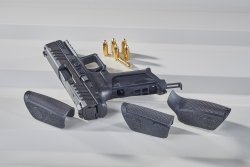 Marcus Heilscher
Beretta APX A1: after pulling the metal retainer out of the grip, the backstrap can be pulled off and replaced with a better-fitting one.

The rear sight, whose muzzle-side end is perpendicular to the slide surface, also permits single-handed loading through a sufficiently stable edge in an emergency. Both the rear and fronts sight can be drifted laterally in the dovetail. After swapping the magazine release, the left-handed user can now enjoy a pistol that is completely left-handed. This is because it does not have a manual safety, and when locked back the slide can be released operating a double-sided lever. Only the disassembly lever is mounted on one side only, on the left in the firing direction. Like its predecessor, the APX A1 is amazingly easy and quick to disassemble: just remove the magazine from the decocked gun, push the takedown lever, which protrudes somewhat on the right, and then rotate it, move the slide forward and remove it from the frame. Barrel and recoil spring can be lifted out of the slide. Accessories include the obligatory brush and a cable lock, a spare magazine and a loading aid. However, this is more interesting for thin-fingered users, because the testers did not find the effort required to load the seventeenth cartridge particularly hard. The effort required to attach a suitable grip backstrap is also pleasingly low. All that is required is to use a small screwdriver to pry out the small metal tab of the retainer at the rear end of the magazine well and then pull it out. On the back of the "L" backstrap, there is a spout that lines up with the grip spur.

Five optics mounting plates on the new Beretta APX A1 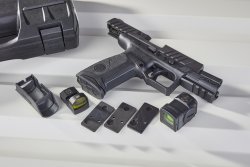 But before that, the cover plate (M3.5 x 6 countersunk screw) must first be removed from the slide. The 2-mm Allen key required for this was not the problem: the screws were, for whatever reason, fixed with locking varnish.

The remedy of choice to remove the cover plate is a soldering iron to heat the screws, or a trip to the gunsmith. Good thing the importer had supplied two guns.

Currently, there are five adapter plates for red dot sights: the Aimpoint Acro C-2, the Burris Fast Fire III – which shares the interface, except for different screws, with the Docter red dot sight. The C-More STS, the Leupold Delta Point and the RMR from Trijicon complete the sextet. A plate for number seven, the Steiner MPS, was not available at press time, but will be in the foreseeable future.

Test: on the shooting range with the Beretta APX A1 in 9mm Luger 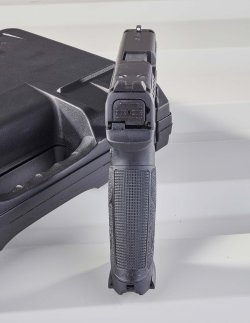 Marcus Heilscher
The front sight of the Beretta APX A1 features one dot, which is enough for quick target acquisition. The rear sight can be drifted sideways.

The wide spur, in conjunction with the matching backstrap, noticeably counteracted the muzzle rise. None of the different bullet shapes caused feeding problems, and case ejection also functioned smoothly. However, the Critical Defence cases, though relatively weakly loaded, struggled out of the ejection port rather than flying out. Deliberately held somewhat slackly on the grip, malfunctions could be reproduced here. But here's the thing: The slide of the test gun was fitted with a 60-gram red dot sight, the Aimpoint Acro C-2, which is about 30 grams heavier than open red dot sights like the Burris Fastfire III. And why the torment? In short, because closed red dot sights are a better choice for some application profiles. Imagine a hunting situation where you're reduced to handguns, for whatever reason. You've taken precautions with a red dot sight for low light conditions. And now you get caught into some wilted leaves and they crumble between the lens and the light emitter. The red dot is gone. A snowflake can do the same. In the rain, on the other hand, you have to choose one of the many red dots. It's not without reason that law enforcement agencies and the military favor the closed variants. They are expensive, ugly, significantly heavier, but in case of doubt the better choice beyond sporting use. By the way, the Aimpoint Acro C-2 is waterproof up to five meters. Accuracy was tested sighting in the gun. At 25 meters, the combination of Beretta APX A1 plus red dot consistently shot relatively tight groups. The ammunition from Sellier & Bellot (115 gr JHP) would even have been enough for five tens on the ISSF precision target. Otherwise, the groupings at 25 meters ranged between 43 and 71 mm.

Beretta APX A1 in 9mm Luger specs and price

Beretta has made excellent use of some six years of market experience with the polymer APX model and has now set new accents in a maturing process. What at first glance looks like "not much change" nevertheless secures the new Beretta APX A1 a top position among the premium manufacturers of polymer pistols. Sure, the OR configuration came a bit late compared to Walther or Glock, but still at the right time. For 798 euro this is a smooth buy recommendation for those who want to use a handgun with red dot sight. And sport shooters do not necessarily have to live with "chunky" closed red dot sights.