The Auto-Ordnance Corporation, a Kahr Firearms Group company, releases a matched pair edition and a gold-plated or silver-plated 100th anniversary edition of the famed "Tommy Gun"

Kahr Firearms Group - Auto-Ordnance Corp.
The limited edition Thompson 1927-A1 Deluxe Carbine is offered in .45 ACP and comes with one 20-round stick magazine

In the year 2016, the Thompson gun design turns 100: it was in the year 1916 that John Taliaferro Thompson, a former 2nd Lieutenant of the U.S. Army Ordnance Department turned Chief Engineer at Remington Arms, created a gun that could be used to clear enemy trenches.

Nicknamed the “Trench Broom”, the design would become the world-famous Thompson sub-machine gun, also in-famously addressed to as the "Chicago Typewriter" due to its popularity among gangsters and lawmen alike during the Roaring Twenties and the Prohibition years.

Variants of the Thompson sub-machine gun such as the M1928-A1, M1 and M1A1 would later serve with the U.S. Armed Forces and other allied militaries during World War II, and would see combat in dozens of Countries − as well as keep serving among law enforcement − well into the 1960s. 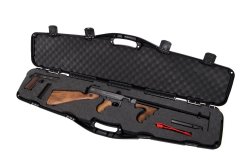 Semi-automatic, civilian-grade pistols and carbines based on the Thompson gun design are currently manufactured by the Auto-Ordnance Corp. − a Kahr Firearms Group company.

Also a manufacturer of 1911-type pistols and M1-type carbines, the Auto-Ordnance brand carries on the legacy of the "Tommy Gun" well into the 21st Century, and now the Company celebrates the centennial of Thompson's design with two limited editions.

First is the limited edition Thompson 1927A-1 Deluxe Carbine, offered in .45 ACP and coming with one 20-round stick magazine. The Thompson 1927-A1 100th Anniversary Deluxe Carbine features a 16.5” finned barrel (18” with compensator) and is prominently engraved with the classic Thompson logo, limited edition numbers, and displays the words “100th Anniversary” on the matte black steel frame. 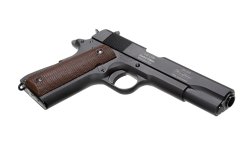 The gun weighs 13 lbs. and has an overall length of 41”. Other features include a pinned in front blade and an open rear adjustable sight. The stock is fixed, has a vertical foregrip, and is made from luxurious American walnut.

As a matched set, the limited edition series also comes with the Thompson 1911-A1 GI Specs Anniversary .45 ACP caliber semi-automatic pistol, offering a 5” barrel and a matte black steel frame in an overall 8.5” long package that weighs just 39 oz. The iron sights are front and rear dovetail cut low profile.

The pistol is shipped with one 7-round magazine. Just like the Thompson 1927-A1, it too is engraved with the iconic Thompson logo, the words 100th Anniversary, and lists the limited edition numbers on the frame. Both guns must be purchased as a set, whose manufacturer's suggested retail price is $1,971 in the United States. The guns are shipped together in a polymer hard case with the yellow Thompson Bullet logo and the words “Chicago Typewriter” in white stamped on the black case cover.

Kahr Firearms Group - Auto-Ordnance Corp.
Also new in this year of commemoration are a gold and a silver-plated version of the famed "Tommy Gun"

Also new for the year are two exciting and classy-looking variants of the century-old Thompson carbine − namely the Titanium Gold and the Polished Chrome versions.

Both the Thompson 1927-A1 Titanium Gold and the Polished Chrome semi-automatic carbines are offered in .45 ACP and have a 16.5” finned barrel (18” with compensator), with a 1 in 16 right-hand twist. Their frames are manufactured out of steel, and sport either a classy titanium-based gold plating or a shining hard-chrome finish on their outer surface − both equally captivating.

Both guns weigh 13 lbs. and have an overall length of 41”. Other features include a pinned in front blade and an open rear adjustable sight. Stocks are fixed and made from luxurious American Walnut; a vertical foregrip is also issued. 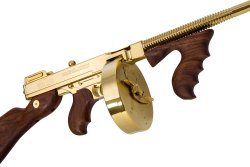 Kahr Firearms Group - Auto-Ordnance Corp.
The gold and chrome-plated versions of the legendary Thompson gun are likely to become extremely popular between gun enthusiasts, and especially among collectors

Both these two new models ship with one 50-round drum and one 20-round stick magazine − also plated in either polished gold or chrome.

The Auto-Ordnance Thompson 1927-A1 DTG Titanium Gold and 1927-A1 DCR Polished Chrome semi-automatic carbines are shipped in a protective hard case which features both the distinctive Thompson logo and the words, “Chicago Typewriter”.

To truly capture the 1920s gangster era, an aftermarket violin case can be ordered for the Gold or Polished Chrome Tommy Gun.

For a limited time only, the introductory MSRP is $2963 for either the Polished Chrome or the Titanium Gold. The cost of the violin case is an additional $221.00. 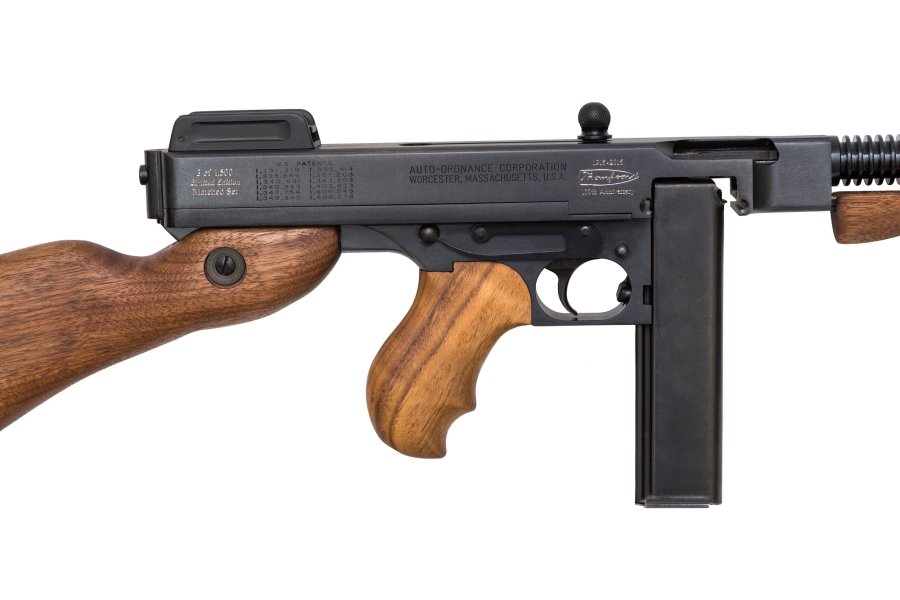 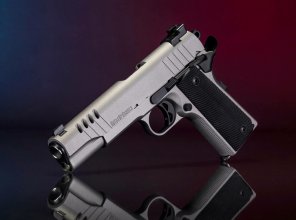 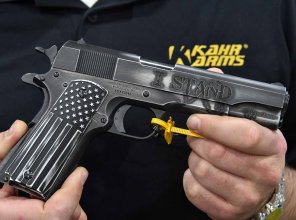 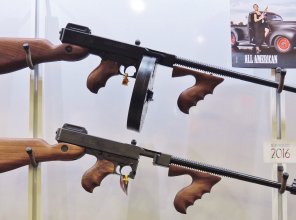