Bigger is better? The influence of barrel length on bullet velocity in handguns

Compact or full size? What is easier to handle raises an important question on the other hand: how much bullet velocity and thus how much bullet energy is lost because of a short gun barrel? We have measured and tested different barrel lengths with different loads for you..

"Bigger is better", Americans say. And over the decades they have developed a penchant for big guns and large calibers, especially for handguns. Whether Colt Single Action Army, Smith & Wesson Model 29 or Colt Government, big guns have always been and still are the order of the day.

In Europe guns are allowed to be a little more manageable. Perhaps this is also due to the fact that in the old part of the world, civilian firearms are almost invariably carried concealed and even law enforcement officers were, and still are, reluctant to use large guns. 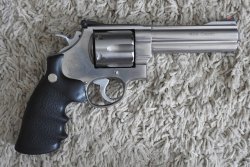 Klaus Schaub
The Smith & Wesson 629 revolver in the powerful .44 Magnum caliber has the shortest barrel in our test, with 5 inches.

Nevertheless, the following question remains for firearms users: what is lost if you choose a compact model – i.e. if you choose the version with a short barrel instead of the longer one? In loose sequence we want to take a look at different revolver models and measure bullet velocity. We want to start with a powerful Magnum caliber:

Smith & Wesson in .44 Magnum caliber, both with a 5-inch barrel and with a 6.5-inch barrel: our first candidate stands for performance like no other handgun. The .44 Magnum revolver was considered the most powerful mass-produced handgun when it was launched in 1955.

Since 1957, the revolver model has borne the model designation 29, which is still in use today. This revolver became known in the Western world in particular through its major role in the 1971 movie “Dirty Harry” starring Clint Eastwood. While the 6.5-inch barrel version was  standard, Smith & Wesson also offered versions with shorter or longer barrels, including a 5-inch barrel version. 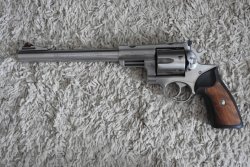 Klaus Schaub
Ruger Super Redhawk: the revolver with the 9.5-inch barrel in .44 Magnum caliber is a particularly impressive sight.

The short-barrel revolvers are not actually “compact” models in the true sense of the word compared to the long-barrel ones since the frame – the N-frame, in the case of the Model 29 - is the same for all models. Manufacturers just offer different barrel lengths basing on a standard model instead.

From the Model 29 with a 6.5-inch barrel, the Magtech cartridge produced the following measured values with regard to bullet velocity: the average of the measurements results in a bullet speed of 370 meters per second (m/s). With the 240-grain bullet, this results in a kinetic energy of 1064.4 joules.

The GECO cartridge achieved a bullet speed of 419 m/s on average from the 6.5-inch barrel model. This results in a kinetic energy of 1365 joules – significantly more.

The two chosen loads achieved the following bullet velocities with the 5-inch comparison gun: the Magtech cartridge achieved an average of 365 m/s, the GECO cartridge 411 m/s. Respective energy values are 1035 joules and 1313 joules.

A conclusion for the difference between the 6.5-inch barrel and the 5-inch barrel in .44 Magnum: the loss of 1.5”/38.1 millimeter barrel length is apparently only slightly reflected in the measured bullet velocities. Consequently, the energy loss is also rather manageable, even though it is around 50 joules for the somewhat more powerful GECO cartridge. 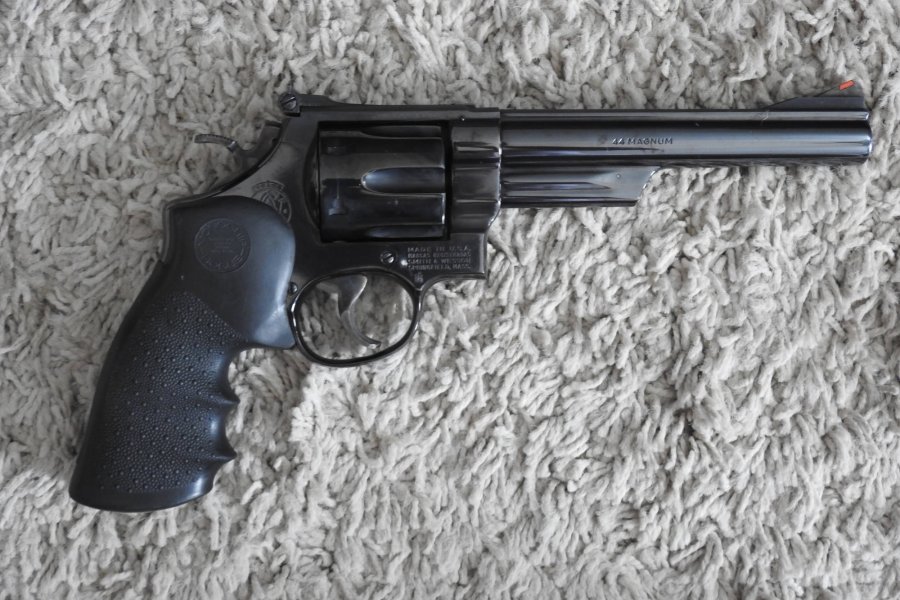 For comparison, we had a Ruger Super Redhawk – also in .44 Magnum caliber with a barrel length of 9.5 inches. The 243 mm long barrel resulted in the following measurements with the above mentioned loads: the Magtech cartridge reaches 396 m/s, the GECO at least 473 m/s. It is noticeable that the bullet velocities have increased significantly compared to the 6.5 inch Model 29. The resulting energy values: 1219 joules and a hefty 1739 joules for the GECO cartridge.

A final consideration on barrel length and the effects on the bullet: when comparing the measurements obtained from the two Smith & Wesson revolvers, one thing becomes very clear – that is, barrel length has a measurable but not a huge influence on bullet velocities. This is associated with a manageable influence on the bullet energy. The fact that the Ruger Super Redhawk with its 9.5-inch barrel results in significantly higher bullet velocities is not surprising. However, the performance of the GECO cartridge stands out more clearly here.

In conclusion, barrel length plays a measurable role in handguns. Depending on the load, 5-inch to 6.5-inch cartridges lose up to 2% of their velocity. On the other hand, a bullet from a 9.5-inch barrel can increase its velocity by up to 13% compared to a 5-inch barrel – of course depending on the load. However, the gains in bullet velocity and energy are limited for longer barrels.

We at all4shooters.com are working for you on further comparisons on this exciting topic!

You can find more about revolvers on our overview page

Here you will find our test of the SR 1911 Competition and the Super GP 100 Competition from the RUGER Custom Shop.