EAW can not only look back on a history of more than 100 years, but has also set standards in the important connection between gun and optics with the invention of the pivot mount. Now, the inventive manufacturer is once again entering new spheres with the lightweight aluminum mount produced using the 3D printing process, although EAW also already has a 3D printed mount made of titanium on offer.

Even though the company's history began as early as 1919, EAW did not start manufacturing riflescope mounts until 1955, and it was not until 1973 that the patent for the pivot mount invented by this company was applied for. Following on from this early inventive spirit, EAW is still at the cutting edge of technology in 2022 and can also serve the LE/military and civilian markets very well with correspondingly practical, modern products. This is demonstrated by the 3D printed mount assembly presented here with a 30- or 34-mm ring diameter in two heights made of aluminum or titanium alloy with a quick-release lever system. 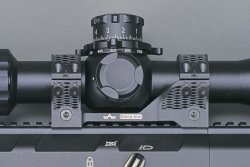 Michael Fischer
There is not much mounting length. However, you can change the mounting length by rotating EAW's 3D print mount 180 degrees and adjust the eye relief accordingly.

The 3D printing process allows geometries that were previously impossible to achieve using conventional manufacturing methods such as milling or turning. As a result, the new EAW 3D mounts are unique in terms of design and magically attract the eye of experienced rifle shooters who have seen just about everything. In terms of design, the German manufacturer gets everything out of the 3D printers that is possible in terms of CAD technology. EAW uses the 3D manufacturing process called "Direct Metal Laser Melting" (DMLS). Here, metal powder (steel, aluminum, titanium) is melted layer by layer by a laser according to the CAD model. DMLS has developed enormously in recent years, so that series can also be produced economically. In silencer construction, this process has been used for a long time to realize special interior structures. But the complete mount was not created using the metal printing process. The clamping system is obviously made of conventionally milled steel, because here, despite all the progress made, 3D printing methods still lag behind milled surfaces in terms of tolerances and surface quality. This is also the reason why the diameters for the rings were reworked on a CNC machine. This is the only way to implement minimum tolerances in combination with the later mounted scope. To adapt to MIL-STD-1913 optic mounting rails with manufacturer-specific tolerances, the clamping force of the clamping levers can be varied accordingly with a screw. The setting found is secured by means of a stud screw.

Picatinny rail through the ages: what system does EAW's 3D printed mount use? 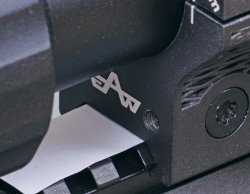 The history of today's "Picatinny rail" goes back to 1930, when William Ralph Weaver introduced the first standardized mounting system for riflescopes. For years, this optics mounting rail was the standard until the A.R.M.S. company further developed it in the 1980s. Nevertheless, in 2009, the MIL-STD-1913 rail was further developed into STANAG 4694, whereby the mounting surfaces between the rail and the scope mount in particular underwent serious changes. With MIL-STD-1913 Picatinny, the mount is placed on the angled surfaces of the rail and a clamp tightens the whole thing. With STANAG 4694, on the other hand, only the lower angular surfaces of the scope mount are used and when the jaws are tightened, the entire mount is pulled down. This mounting method increases repeatability, especially when working with different mounting rails. The Picatinny mounting surface is significantly smaller than with STANAG 4694, which can play a role especially with heavy optics on rifles in high performance calibers. Manufacturing-related tolerances can be better compensated for with STANAG 4694 compared to MIL-STD-1913 because the scope mount rests on only three points instead of four. In the worst case, the optics may even be positioned slightly askew with the four-point support. This is because if not all four support points are in contact with the mount, mounting becomes more like clamping. For repeatability when using multiple weapons, the 4694 standard is certainly a better choice. We recognized the MIL-STD-1913 mounting system of the EAW mount by the fact that we could still slide something under the mount. Thus, it was clear that the clamp did not pull the mount down, which it should have done under STANAG 4694. In the end, however, this only plays a minor role for the hunter or shooter, because the MIL-STD1913 system performs quite well and EAW basically offers both systems according to customer requirements. 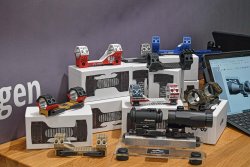 Franco Palamaro, © F.PALAMARO
This picture illustrates all the special coatings that are possible with EAW's 3D mounts according to customer requirements.

With these mounts, EAW has introduced novel high-tech products in an attractive design to the market with their innovative lattice construction, which have not existed in this form before. Compared to conventionally manufactured aluminum mounts, they are 30 to 40 percent lighter, while robustness is by no means neglected. This is because the DEVA testing institute has already conducted load tests in which the 3D print mounts withstood over 2,000 shocks with 700 g forces. The mounts are available in natural aluminum, black anodized or RAL 8000, with special coatings also possible. However, so much innovation and quality also has its price, at 659 to 759 euros depending on the mount version.

Subscribe to the Newsletter
This article is also available in this language:
DEIT
Click here for more information on the topics:
EAWOptics
That might interest you too: 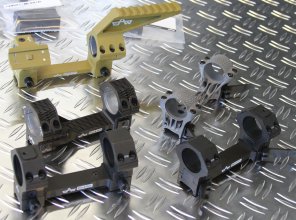 EAW09/02/2022EAW is one of the renowned manufacturers of riflescope mounts in Germany today. We present some highlights and take a look at the history 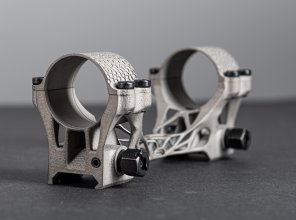 EAW05/17/2022EAW launches a second, extremely lightweight 3D-printed scope mount – We have the details!