Lockin’, the wondrous knife, is here

Alberto Gariboldi is a young knife maker and inventor of the Lockin', an ingenious folding knife with a blade that is considerably longer than the handle, which was never thought to be technically possible. We meet the man himself and find out how this knife, which won a Mercedes award when it was still in the design phase, came to be.

Hi Alberto, please introduce yourself to the readers of all4shooters...

I was born in 1989 in Merate in the province of Lecco in Italy. I am the co-founder of an innovative technology start-up (Repiks Technologies), I play and teach the trumpet and I am passionate about handicrafts, particularly knives, signing my work as “Garbino”.

How did you come to be a knife maker?

I have always been very creative and good with my hands ever since I was a small boy. I have always enjoyed the support of my dad, a mechanical designer, my mum, a graphic designer, my grandfather and uncle who are both engineers and many of my musical, artistic and technically-minded relatives. When I was about 18 years old, I met Master Knife Maker Claudio Riboni, who introduced me to the world of artistic knives.

Where did you get your inspiration for the pivot sliding knife?

I was in my lab one evening, it was very late and I was struggling with a small folding knife that did not want to work properly. In a moment of reflection, I realised that, to my knowledge, the blade of a folding knife has to be shorter than the handle, and this did not sit well with me. It was then that I took a piece of paper the same size as the knife, drew two dots, inserted two pins and attached two more pieces of paper. This was the start of a two-and-a-half-year journey that led to the Lockin’ pivot sliding knife. 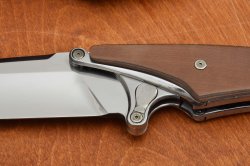 G.B.
There is a titanium button that acts as a safety on each side of the head. Both buttons must be pressed simultaneously to open the knife. 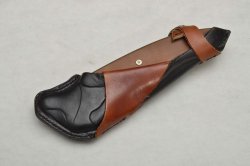 G.B.
View of the knife's unique shape. A special leather sheath has also been designed.

How did you end up winning the Mercedes 'Artigenio' award?

It all began with a few sketches and a paper design, a wooden model, an initial virtual projection and a 3D home-printed model in blue plastic. After a while the project came to a halt due to its apparent complexity. One year later, the 'Artigenio' award, a competition for “makers with plans in the pipeline”, was advertised on social media. I decided to enter with the blue plastic knife and a few months later I won a considerable amount of money (10 thousand euros) to spend on developing my project.
I then put the idea to Repiks, my start-up that was specifically founded to develop and patent technologically innovative products. Thanks to the 'Artigenio' prize money and Repiks' engineering and communication expertise, the project saw an instant surge in quality.

The executive design phase then began, followed by patenting the invention, a precision 3D-printed prototype, an initial marketing analysis and the establishment of basic communication.

The production of the first and only metal prototype took just under six months of work.

G.B.
Bottom view showing the unique riveted folder that allows the handle to be extended. 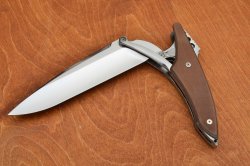 Can you explain how it works?

This knife, in which the various components form an articulated quadrilateral, opens and closes by means of a pivoting sliding motion. The handle breaks up as the knife closes, expanding to cover the entire length of the fixed blade (the cutting edge is 180 mm long).
The handle reforms when the knife is opened, shrinking to around 130 mm, making the knife less cumbersome to use than a folding knife of similar size. The contact surfaces between the different components of the five-pin, open-configuration system are all different, which enhance the knife's strength and robustness. The double safety means that the knife can be used, opened and closed with either hand. 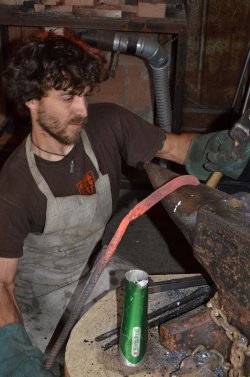 Which materials did you use for the pivot sliding knife?

The two folders are made of C80 steel. The two safety buttons are made of 1.2-mm 6Al4V titanium, while the bolsters are made of multi-layered cherry wood and carbon fibre. The knife comes with a prototype leather sheath. 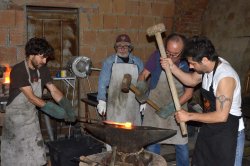 When will the final version be ready and how much will it cost?

Unfortunately, I am still not in a position to talk about timings and costs but both me and my two partners at Repiks are working to bring two versions of the knife into production at an affordable price as soon as possible.
The first will be a limited edition version of just 100 sequentially numbered knives. The mechanical elements shall be made completely of high-performance titanium and the bolsters of high-performance technopolymers. The mechanical elements of the following series shall be made of steel and completely configurable by the customer. It will also be possible to produce customised knives upon request.

Subscribe to the Newsletter
This article is also available in this language:
IT
Click here for more information on the topics:
KnivesAccessoriesFolding blade
That might interest you too: 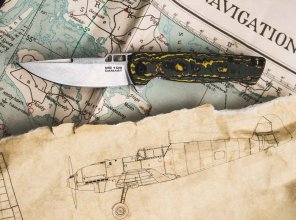 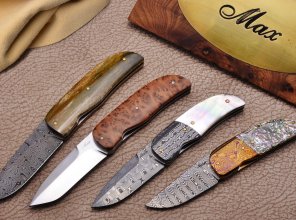 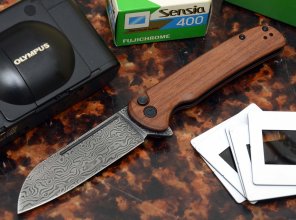 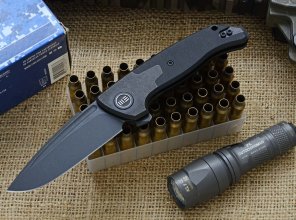 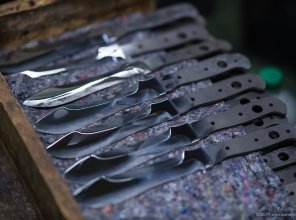 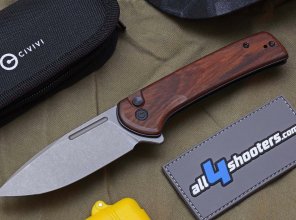 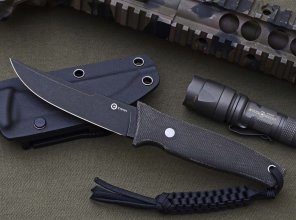 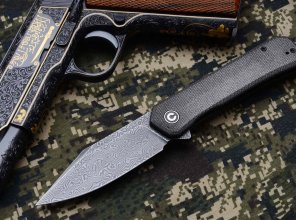