A visit to the Stockholm Army Museum

Stockholm's "Armémuseum", the  Army Museum, not only presents visitors with relics from Sweden's stormy past, but also offers a reflection on doubts and anxieties related to war events. We visited it for you.

A contribution from Giorgio Brancaglion09/24/2022

The Stockholm Army Museum occupies three floors of what until the early 1900s was a Swedish army barracks. Indeed, as soon as you pass through the gate of the building you are met by a Swedish-made Stridsvagn S (103) tank, in service from 1966 to 2001. You then cross a large parade ground that leads to the entrance of the building, which is maintained in truly excellent condition. Immediately before you enter you are greeted by a double row of bronze naval cannons dating from the 18th century, that are an eloquent preview of what you will see inside. 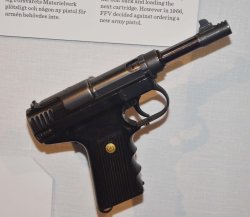 G.B., © G.B.
Among the handguns on display, one of the most interesting is this GF-W68 pistol designed in 1965 by Erik Wallberg for the Swedish Army and never adopted. It is probably the only existing example.


The museum is spread over three floors, the second floor is the most interesting for guns enthusiasts and offers the visitor a large collection of firearms, uniforms, and equipment from the Swedish army (but not only) starting from the early days of matchlock arquebuses to the present day. The interesting pieces are not few, but among them stands out a very rare Carl Gustav GF-W68 pistol that was designed in 1965 by Eric Wallberg of KATF (Kungliga Armétygförvaltningen, i.e., the administration of the Royal Swedish arsenals). This 9mm Parabellum semi-automatic pistol with a gas-operated system was tested for adoption by the Swedish Army, but evidently it did not convince because of its complexity (slide and bolt were two separate elements). Eric Wallber is the same engineer who in the late 1930s had designed a conversion that could turn Carl Gustav bolt-action rifles into semi-automatic weapons and led to the birth of the Ljungman 1942 rifle. The rarity of this gun is truly extraordinary, and we are not aware of any others on display in Europe. If any of our loyal readers know more about it, they can comment on this article on our Facebook page.

Also very well stocked is the collection of weapons and equipment of the German army in World War II, with a fine example of the Enigma cipher machine and a Goliath remote-controlled tracked mine.

Among the environments reproduced inside the museum you find an entire military storehouse like those set-up by the Swedish army in World War II fearing German invasion.

The second floor of the museum is more spectacular and in some ways more disturbing, with a series of dioramas that are striking in their un-rethorical rawness, recounting wartime events that shook Sweden in the most recent centuries, with particular emphasis on the war against the Napoleonic army (1805-1810). We are not accustomed to such a direct type of narration, evidently designed to strike the visitor to the heart and make him reflect on the horrors of war. Thus, a series of truly disturbing characters parade before your eyes: chimpanzees killing one of their own kind, an exhausted horseman attempting to light a small fire in a blizzard, or an elderly woman contending with a stray dog for survival over the remains of a horse who has been dead who knows how long.

A small room in the museum reproduces the office of Allan Wallemberg, a diplomat who helped tens of thousands of Jews escape the barbarity of Nazism.

A full visit to the museum takes about two to three hours. Thanks to the “Guided Tour" app that can be downloaded for free, it is possible to take advantage of an audio guide in English of the Armémuseum and most of Stockholm's museums.

The Army Museum is open Wednesday through Sunday, from 11 a.m. to 5 p.m., Tuesdays from 11 a.m. to 8 p.m. The address is Armémuseum, Riddargatan 13, Stockholm. You can also visit the museum's website to learn more.