The photo gallery we are proposing here, consisting of pieces from the author's private collection, offers a brief look at the military dog tags of some of the most known western armies from ancient times and the World Wars to the present day. 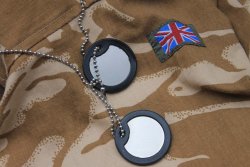 A pair of British Army dog tags with silencers, currently in use and "2nd series Tropical Desert DPM" camouflage.


The history of military dog tags is lost in the mists of time. They say that the Spartans already had a system of identification for their soldiers – they wrote their names on wooden sticks tied to their left wrists. In Roman times the legionaries wore the "signaculum" around their necks, a circular piece of lead on which the name of the soldier and his unit were engraved.

Coming to more recent times, during the US Civil War (1861-65), people began to think about how to identify the fallen in the field, but the various attempts to provide soldiers with an object resistant to wear and tear and damages of war, on which the owner's personal details and home unit could be marked, were based more on personal and individual improvisation rather than being mass produced. This began only in 1906, when the US Army officially authorized the use of dog tags. But in the meantime there was someone who had done it first and better: Germany!  At the beginning of the Franco-Prussian War in 1870, Prussian units were issued Hundemarken, literally identification tags (Marken) for dogs (Hunde). 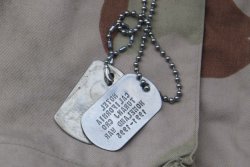 A pair of US Army dog tags and "Desert Camouflage Pattern, 3 Color".

That's because the idea came to an engineer from Berlin who worked on logistics at the Prussian Ministry of War. While strolling through the capital and observing the dog tags that indicated the payment of the relative license fee, he got the idea for the much needed military identification tags. Over time, in international – but especially American – military terminology, the term “dog tags” spread. Some armies (the Italian and Austrian armies among them) during World War I adopted two-piece metal cases containing slips of paper with information about the soldier's identity. These had to be worn around the neck or – as in the case of officers, who could afford it – inside finer, specially made patented bracelets (see the Italian "Patria" bracelet, marketed by the Gaetano Boggiali company of Milan).

But these solutions proved to be unsuitable and especially the paper slips they contained could not withstand the wear and tear in the field. So, between the two world wars, the use of metal plates which could be made from aluminum, brass, zinc, etc., on which to indelibly engrave the soldier's personal details, became more and more popular. 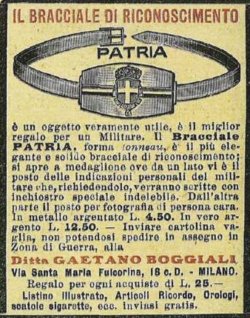 The solutions that were adopted and that today are almost unchanged in contemporary armies were two: two separate plates with duplicated information, both circular (British Army, Australian Army) and rectangular (US, Mexico, Japan, etc.), or a single rectangular or oval plate with horizontal slits that in case of death allowed to break the plate in two, leaving one half on the body and removing the other half for recording (Germany, Austria, France, Sweden, Switzerland, Italy, Spain, Canada, Denmark, Finland, Norway, Sweden, Hungary Israel, Holland, Russian Federation, etc.). Also with regard to the data reported on the individual plates of the various armies, the story is long and quite articulated. We will not go into the issue here: suffice it to say that each armed force has developed over time a system of abbreviations, more or less encrypted, which has gradually streamlined the list of information relating to the soldier, limiting it to only vital personal and military data. The final evolution, thanks to the progressive digitalization, has produced actual digital dog tags using USB cards.

Subscribe to the Newsletter
This article is also available in this language:
IT
Click here for more information on the topics:
CultureMilitary firearms
That might interest you too: