Firearms UK, association campaigning for the protection of firearms ownership within the UK

Firearms UK was started by a small team of unpaid volunteers in 2012 with the purpose of fighting for all shooting and associated activities, regardless of the shooting discipline

The Team will represent the interests of all shooters and to be proactive with regards to firearms law and efforts to repeal the unjust legislation that has been enforced upon the UK Shooting community. We trace our origins back to the “No to airgun licencing in Scotland” Campaign as this is where the founding members of the team first met and wished to continue to build on the foundations of a united front created by this campaign and to encourage everyone to be more active in fighting for their shooting rights.

We see all shooters as a large community, a community that is diverse and broad in its tastes.  However, we aim to build bridges between every facet of the community so that we present a united front to any future oppressive legislation that hinders firearms ownership for lawful pursuits.  Our “Unity Campaign” is just the beginning of this, starting with a petition that calls for the re-categorisation of .22 rimfire pistols as Section 1 firearms.

We appreciate that .22 rimfire pistols are not of interest to everybody, however, if the shooting community can successfully stand in solidarity on this issue it will pave the way for further positive changes to other areas of firearms ownership in the future.  The UK shooting community numbers around 850,000 people with Shotgun/Firearms Certificates and over 4,000,000 people if we include airguns and others with an interest in shooting. A united community of this size dedicated to safe guarding our sports would put us in a much stronger position.

To further highlight the diverse nature of shooting and our own personal commitment to supporting all forms of shooting the Firearms UK team members come from various different backgrounds from all over the UK.  Male & Female from all age groups. Some of our team have served in the military whilst others come from Engineering/Trade backgrounds. We certainly are not the stereotypical type of shooters that the media often like to portray.
Our team also participate in various forms of shooting from clay pigeon, target shooting, game shooting and airgun shooting.

Each member of the team believes that it is a right for law abiding people to be able to own firearms and that overbearing restrictions upon us does not lower crime in anyway.

Looking towards the future Firearms UK will be focussing on the long term longevity of shooting sports and will shortly be launching a campaign focusing on introducing more people to shooting sports. It is our passionate belief that the number of people, especially those under 25, need to be introduced to shooting sports for the survival and bright future of shooting in the UK.

"We are highly active on the Internet. Our website, http://firearmsuk.org/, is our main repository for relatively “static” information.  We also have a strong Facebook and Twitter presence, with follower numbers increasing daily, along with pages on a variety of other sites (see links below). We would like to encourage everyone who is interested in promoting shooting to visit our pages and to join the movement for positive change through the Unity Campaign. The importance of the individual cannot be overstated in shooting.  Everyone is capable of doing something to help shooting from signing and sharing our active petitions to introducing new people into the sport". 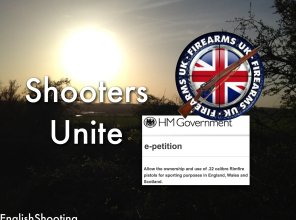 firearms-uk06/05/2015Firearms UK launches the "Unity 2015" campaign for the legalization of .22 sporting pistols