The Shooter's Talk – The problem with "common wisdom"

Whether they are legally owned or not, fewer guns around mean less crime and less homicides: this is the anti-gun mantra usually presented as common sense. Yet, two well-researched studies show that truth – and reality – are quite different.

In the last days of 2018 – just in time for New Year's Eve celebrations – Baltimore, a city with even stricter gun-control laws in a state with already strict gun-control laws like Maryland, recorded its 300th homicide for the fourth straight year. As expected, political answer is to enforce more rigid gun-control laws.

Meanwhile, in the wake of the 2017 Las Vegas shooting that took the lives of 58 people, “bump stocks” have been banned in the US because they are considered a “threat to public safety”, according to authorities. No matter if in 2016 a single truck in Nice, France, killed many more people (86) than all bump stocks since they were invented: trucks can't be considered a “threat to public safety”, of course.

From these and many other news stories we can easily understand that, after all, common wisdom is that the very same existence of firearms is a threat per se : fewer guns equal less crime and the less guns the better, without fussing about legally and illegally owned ones.

A perfect world is where nobody has a weapon: it's all beautifully intuitive. Yet, a couple of very recent and well-researched studies seem to undermine this assumption. The first comes from the Sapienza University of Rome - one of the most prestigious Italian universities – and the other from the Mises Institute, an educative organization located in the US and named after the famous Austrian School economist Ludwig von Mises.

Security and legality: the Italian job 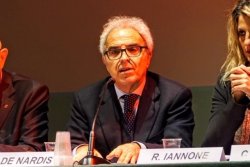 Professor Paolo de Nardis, Italian curator of the study on the issues of legal detention of firearms and public security.

Entitled “Security and legality: weapons in Italian homes“, the Italian study is a in-depth analysis by Professor Paolo de Nardis on the issues of legal detention of firearms and public security. De Nardis collected data from 2007 to 2017 discovering that only about 5% of the murders are committed with legally detained weapons, of which about 12% are acts of euthanasia, carried out with the intent to alleviate the sufferings of the victim. Talking about self-defense, only 2.5 per cent of homicides were ruled by Italian courts as non-justifiable.

More importantly, the academic research shows that among the legal gun owners the number of homicides is 20% lower compared to the general population, and the recent increase in firearms licenses in Italy corresponded to a decrease in murders. (You can find more info on the Italian all4shooters platform.) 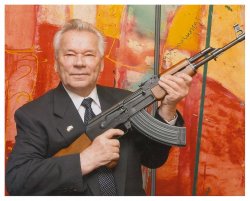 Izhmash OJSC
In Russia, there is a modest 12 guns per 100 people, about half the Swiss rate. Yet Russian homicide rate is 10.8 per 100,000. (In the image, Mikhail Timofeʼevič Kalashnikov.)

The Mises Institute, on the other hand, compares the number of civilian-owned guns per 100 people to homicide rates in European countries. Results are astonishing – for gun control supporters, at least: “Civilian guns in Austria, for instance, are six times more numerous what they are in the UK. But the homicide rate is lower in Austria. Similarly, there are twelve times more civilian guns in Switzerland than in the Netherlands. Yet both countries have about the same homicide rates. Attempts at proving causality here then especially starts to go off the rails when we look at Russia. In Russia, there is a modest 12 guns per 100 people — which is about half the Swiss rate. And yet the country's homicide rate is 10.8 per 100,000.”

These data are the more interesting if you consider that guns are far easier to acquire legally in Switzerland and Austria than in Russia. And what about the Czech Republic, where gun laws very lax by European standards? There are more than 200,000 concealed-carry permits in a country of fewer than 11,000,000 people. Thinking along the anti-gun lines, there should be a lot of homicides and mass-shooting, Right? Not quite: at less than one per 100,000 people, the Czech Republic has one of the lowest homicide rates in Europe.

Nevertheless, it's all just numbers. We can feel confident that the “right answer” to crime and terror attacks will be the same as always: more gun-control and draconian gun-laws to prevent law-abiding citizens from getting and owning guns. That's “common wisdom” after all, isn't it?