20 years of GSG: how a spontaneous idea of the founders turned into a successful sales and manufacturing company in the gun industry

What are the reasons for the successful development at German Sport Guns? Entrepreneurial creativity, recognizing opportunities, always focusing on the customer and a team you can rely on 100%: a look back at the first two decades of the company's history.

It's really exciting to read how it all started at GSG and what happened over the last 20 years to bring GSG to where it is today. We take you on a journey through time: on a business trip to Japan, in 2002 Michael Swoboda and Dietmar Emde developed the idea to start their own company that would deal with the development, manufacturing and distribution of guns.

Michael Swoboda, who summarized the first 20 years of German Sport Guns for all4shooters.com, tells us: "Without the time at Umarex, it would not have come to the foundation of the company German Sport Guns." Because that's where GSG founding members Dietmar Emde (as design manager), Manfred Nienhaus (as sales manager) and Michael Swoboda (as import manager) worked at the time. German Sport Guns GmbH was officially founded in July 2002, but business operations did not start until October of the same year.

Financing the young start-up was "creative": none of the three founding members had any significant assets to show for it. Michael Swoboda therefore sold his private car and liquidated his savings account. His father, master gunsmith Joachim Swoboda from Lingen, granted German Sport Guns GmbH a small loan. With an overdraft facility of only 80,000 euros, the company got off the ground. At that time, very accommodating business partners also helped: for example, a Greek supplier noted "Customer pays when he can" on the invoice for the first shipment. Other suppliers helped with long payment terms of up to 90 days.

The first development order for an air pistol was placed in 2003 by the Gamo company from Spain. Gamo, based in Barcelona, is one of the largest manufacturers of air guns in the world. Due to the very familiar and friendly relationship with the owner family Casas, there has been a financial participation on the part of Gamo in GSG for several years. Shortly after receiving the first development order, GSG also took over the distribution of Gamo air rifles in Germany.

From "borrowed" designers to the first in-house production 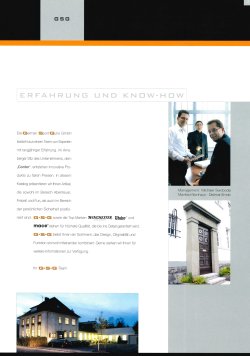 GSG's first company address in the Binnerfeld near the Ruhr in Arnsberg-Neheim. Above in the picture Michael Swoboda, Manfred Nienhaus and Dietmar Emde (from left).

Michael Swoboda also remembers the Casas brothers' first visit to Arnsberg. At that time, GSG was located in the premises of the old Spiegel lamps factory. So soon after its founding, the small company naturally did not yet have any employees in the design department. One night before the visit of the Casas brothers, the rooms were repainted and employees of a friendly engineering office were sitting at their computers "designing" when the visit arrived. Making noise is part of the trade. It worked and GSG received the first development order. 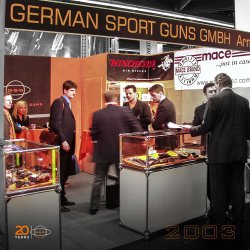 The first IWA booth in 2003, the year after German Sport Guns was founded. Michael Swoboda is standing fourth from the right.

At the end of the 1980s, Michael Swoboda attended gunsmithing school in Ehingen together with Bernhard Knöbel (then managing director of Blaser and now of Carl Walther). Through this old connection, contact was then made with Michael Lüke, the head of the L&O Holding/Blaser Group, and GSG was awarded another development contract in 2003: the development of the SIG Sauer Mosquito.

After the development was completed, the question arose as to the production of this gun. Since SIG Sauer in Eckernförde had no experience with zinc die casting, the decision was made to have the Mosquito also made by GSG. With this rimfire pistol in the (scaled down) design of a SIG-Sauer service pistol, the foundation was laid for further products in the field of edged weapons, which were then also produced under the own GSG brand. With its first product under its own management, the young company made the step across the pond to the USA – and in 2008 created a completely new category of tactical rimfire rifles with the GSG5. A conversation at the counter in Las Vegas put the company in touch with Tony DiChario, owner of American Tactical Imports. Then, as now, ATI is the importer of all GSG guns in the USA. Since then, Tony DiChario and Michael Swoboda have enjoyed a long-standing friendship that goes far beyond a normal business relationship.

On Michael Swoboda's first business trip to China and Hong Kong in 2003, he discovered a new supplier: "I was just about to leave the trade fair, looked down the aisle to the left again and saw a muzzle on a trade fair stand peeking out as I passed by." Michael Swoboda had found a spring-powered airsoft gun in the tactical design of a G36 at an unbeatable low price – now also available for sale in Germany. At that time, GSG was the first company in Germany to offer tactical airsoft guns. With over 100,000 models sold and more in this category, new investments could be made again. Another important milestone in the field of merchandise was the takeover in 2006 of the distribution of all Cybergun products. Cybergun was then as now specialized in airsoft guns and at that time licensee of Colt, SIG Sauer, Kalashnikov and other brands.

In 2013, the majority shares of GSG were then taken over by L&O Holding with, for example, the hunting rifle companies Blaser, Mauser, Sauer, Rigby, as well as Minox and Sig Sauer Inc. based in the USA. Shortly after the takeover, it was no longer possible to supply SIG Sauer Inc. in the USA. Out of this situation, a few years later, the idea was born to also distribute .22 rifles under the Mauser brand in the USA. To this end, GSG's long-time partner in Canada, Blueline Solutions, owned by Doug Ruzic, founded a branch office in the USA. Here, too, is an intensive and long-standing friendship that has helped to drive the business forward on both sides of the big pond. Thus, a second mainstay had been created in the USA and since then the dual strategy with the GSG and Mauser brands has been successfully pursued. 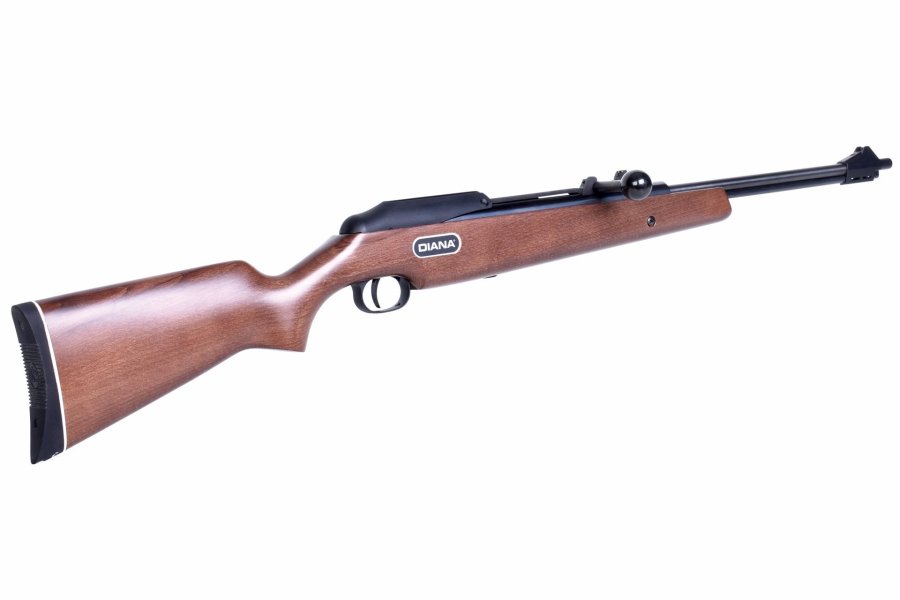 The Diana 30 Neo is, so to speak, the luxury version of the Diana 30 "Oktoberfest" air rifle that has been popular for decades and was introduced in 2022. The Diana brand has belonged to GSG (German Sport Guns) since 2014.

In 2014, the takeover of Diana in Rastatt took place. To be honest, everyone involved had imagined this takeover to be easier. Due to the long history (starting in 1890), the knowledge was in the heads of the long-time employees, but not on technical drawings. In the end, with the support of the L&O Group, GSG managed with a lot of effort to move production from Rastatt to Ense. At Diana, the range was expanded to include merchandise products, the existing products were optimized, and the focus was on the development of PCP air rifles and classics such as the Model 30 Neo.

2016: German Sport Guns takes over the distribution of SIG Sauer 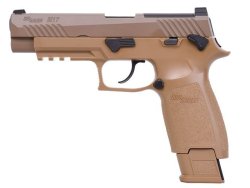 The SIG Sauer ProForce P320-M17, an airsoft pistol with gas blowback system (GBB) and with the official SIG Sauer markings.

Since 2016, GSG has also been selling SIG Sauer air guns, and since 2019, the airsoft catalog. In 2018, SIG Sauer Electro Optics products were added and then SIG Sauer Firearms in 2021. This development led to the unification of both locations in Ense-Höingen. In the same year, the extension to Plant 2 was started, with an additional production/warehouse hall, a further office wing and a shooting range. The investment sum here amounts to about 4 million euros. GSG has thus become a permanent fixture in the German specialized trade, both for guns and accessories. The expanded domestic product segment has generated annual growth rates in the high double digits. 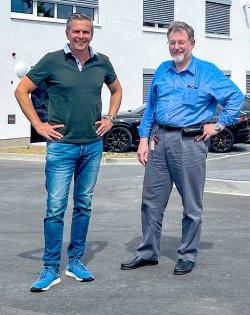 In 2017, two of the three founders, Dietmar Emde and Manfred Nienhaus, left the company. Michael Swoboda remains managing partner of both companies and is responsible for sales and marketing. Florian Hasler joined the Diana team in 2018 as technical managing director and also took over the technical management at GSG in 2020. His many years of experience in the hunting guns sector in companies of the L&O Group as well as his activity as a successful sport shooter have since benefited the developments of new products of both companies. At GSG, customers can soon look forward to the GSG-9 in 9x19 caliber, and at Diana, customers are already eagerly awaiting the new Diana XR line of PCP air rifles.

And the economic status at the anniversary? In total, the two companies GSG and Diana generate a total turnover of over 30 million euros and currently employ over 100 people at the site in Ense.

An overview of the entire product range of German Sport Guns is provided by the company website of GSG.

And of course, the team of all4shooters.com also congratulates on the first successful two decades and wishes all the best for the future.

Subscribe to the Newsletter
This article is also available in this language:
DE
Click here for more information on the topics:
German Sport GunsCulture
That might interest you too: 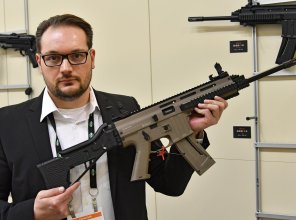 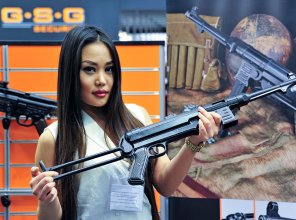 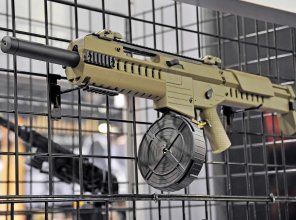