What would James Bond be without his Walther pistols? The (rather rhetorical) question is attributed to 007 producer Barbara Broccoli, for whom no Bond film was conceivable without a Walther for the secret agent. The question is rather: which one should it be?

© IMFDB.org
Movie scene from Dr. No: 007 has to trade in his old Beretta for the Walther PPK, ballistically not much more effective either. 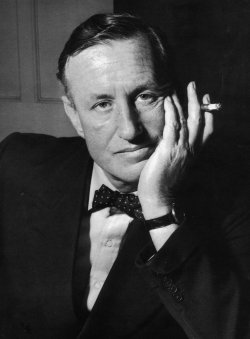 © VISIER-Archiv
James Bond creator Ian Fleming (1908-1964) initially wanted a Beretta instead of a Walther for his title character. He himself was in the navy, a spy and a journalist.

For Ian Fleming, the spiritual father of 007, the matter was only clear after he had sought advice from the British gun expert Geoffrey Boothroyd: Boothroyd criticized the Beretta M1934 pistol in 6.35 mm caliber, which Fleming had chosen for the first 007 novels published from 1953, and suggested a more powerful pistol instead. In the end, the two, who have since exchanged letters, agreed on the Walther PPK in 7.65 mm, which was already a classic at the time. Boothroyd was later memorialized on screen in Q, 007's armorer, even if he would certainly have had a different ballistic opinion about Q's cinematic statement that PPK rounds supposedly went through a pane of glass like a brick. Be that as it may, Bond's Walther PPK has been a recurring theme in almost every movie since the first, Dr. No (1962).

Loosely, because there were always deviations in terms of cinematography. Apparently, the movie armorers weren't quite as precise about weapons: a PPK was mentioned, but 007 Sean Connery used the somewhat larger Walther PP. On the movie poster for From Russia with Love, Connery is even holding a Walther air pistol in his hand: in 1963, the PPK was not available for the photo shoot, and the dedicated photographer David Hurn, who was already famous at the time, unceremoniously volunteered his own LP53, which he normally used for relaxation in the back of the studio. The graphic artists in the editing studio should just retouch the too long barrel afterwards. That would give the gun a PPK look, with no one noticing the difference. 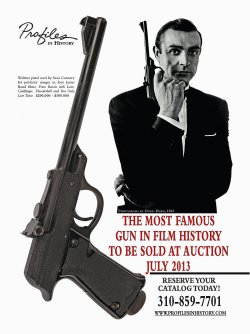 007 Sean Connery with the most expensive air pistol in the world, his Walther LP53. 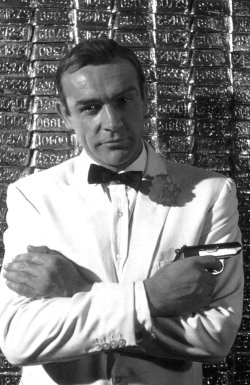 Here, 007 Sean Connery is actually holding a Walther PPK, albeit one in Duotone with a chrome frame and blued slide.

Of course, the retouching was forgotten, the photo with the air pistol became an icon of the 007 series and  was revived several times on posters up to You Only Live Twice. Meanwhile, the LP53 with serial number 054159 was later sold at auction at a high price twice along with other Bond props: in 2010 by Christie's for an incredible $437,000 and again in June 2013 for just under $250,000, always with a certificate from Hurn that this was indeed the genuine Bond's air pistol. The Walther PP from Dr. No then came under the auction hammer as a prop in Beverly Hills in 2020. An anonymous bidder (as is usually the case) won for $256,000.

But Agent 007 also had to be adapted to the spirit of the times in cinematic terms. For the unique situation when two independent Bond films were released in 1983, the PPK was replaced by the Walther P5, which was more contemporary at the time and was carried in the holster by both Roger Moore in Octopussy and former Bond Sean Connery in Never Say Never Again. The P5's use by agents did little to help it in terms of sales, which was probably also due to the Cold War years. The futuristic Walther WA 2000 semi-automatic rifle also made a brief cameo appearance in 1987 in the 13th Bond film, The Living Daylights.

Things looked different again in 1997 with Tomorrow Never Dies. In 1994, the Umarex Group had taken over the then financially troubled Walther company and virtually accelerated it into the next millennium with the new P99 with its polymer frame. Bond loses his beloved PPK in combat in Saigon and is allowed to choose a new pistol in the secret armory of agent Wai Lin. "The new Walther! I asked Q to get me one of these!" he exclaims delightedly – no marketing professional could plan it better. Of course, the manufacturer Carl Walther has benefited from the movie fame surrounding the PPK since the 1960s, even if, according to the company, no sponsorship money has been contributed to this day – only "in kind". 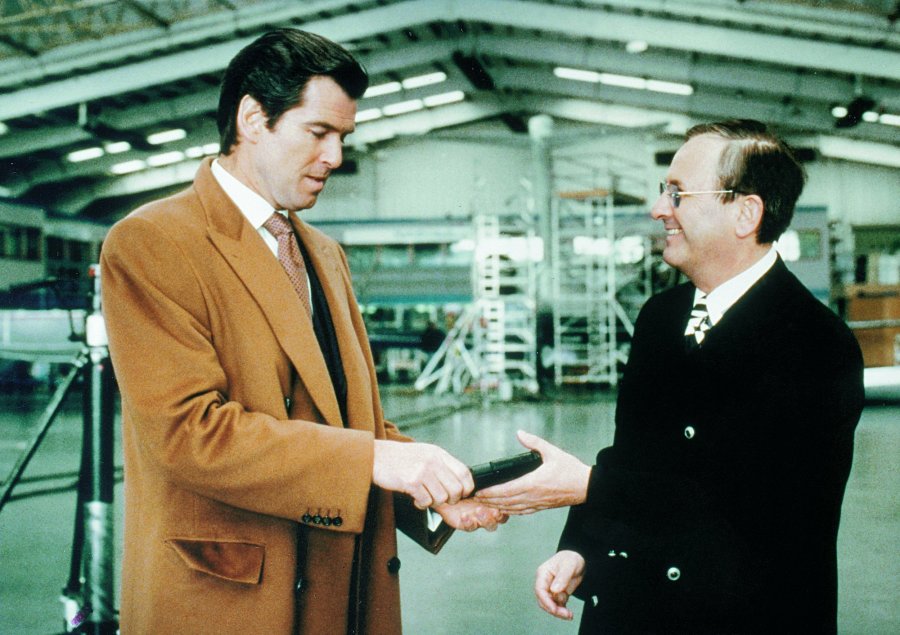 © Umarex
Perhaps this is how it really was back then: 007 (Pierce Brosnan) was personally presented with his new Walther P99 by Walther shareholder Wulf-Heinz Pflaumer (right) during the latter's visit to the filming of Tomorrow Never Dies in London.

Senior boss Wulf-Heinz Pflaumer, who ran the Umarex/Walther group of companies from 1994 to 2012 together with co-founder Franz Wonisch, was always pleased that all the other sponsors, from car manufacturers to the 007 watch, invested immense sums to appear in the film as product placement to promote sales. It is said that Walther was only asked by the film's armorers to deliver a good dozen Walther pistols to the location before filming began. Some of these were used true to the original for close-ups, while others were converted into movie props, i.e. blank firing only guns.

As the world market leader for replica guns, Umarex consistently exploited the 007 fame of its own Walther brand: for every movie release, special versions were available as alarm pistols or CO2 pistols, sometimes with dummy silencers and special markings reminiscent of the agent's image (but never the original title, which was indeed protected). Even when the Walther PPK replica had to be taken out of the Umarex catalog (the molds used for decades had become unusable), the demand for used models hardly diminished. In 2014, when French author Dennis Collette needed a PPK for the cover of his book on 007 guns, a gun from a private collector was found by Umarex and sent to Paris. Collette was apparently so enthusiastic that the loan gun never found its way back to Umarex and the former owner... 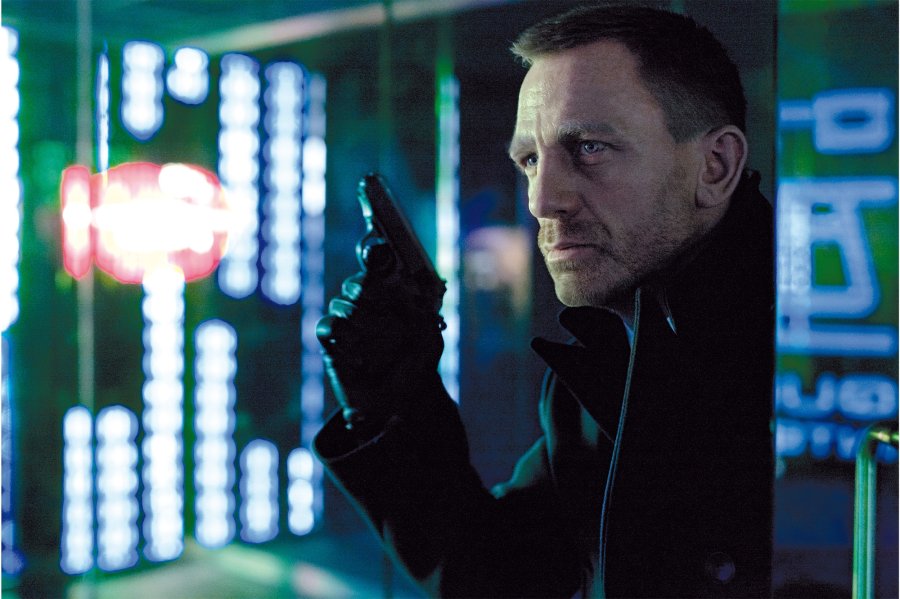 © IMFDB.org
Daniel Craig lived through the entire Bond life from his first mission to his death in five 007 films between 2006 and 2021. The Walther PPK (or PPK/S) was usually his constant companion.


With the change to Daniel Craig as 007 in Casino Royale in 2006, a leap back in time to the earlier Bond years was dared (in the famous opening credits with the gunbarrel sequence, Bond's first licensed murder is shown, which gave him the agent number 007). Nevertheless, Craig still carried the P99 here, only in the follow-up films from Quantum of Solace onwards did he again resort to a PPK, with which he shoots down a helicopter on an occasion. In Skyfall the pistol, which has now mutated into a PPK/S, gets a sensor that only allows Bond's hand to fire it.

In any case, you shouldn't even try to put the various storylines of the 25 Bond films in chronological order and to understand the various uses of the Walther guns. When the hero uses a different make of gun (such as a Heckler & Koch as in Spectre), he has only stolen it from a villain and throws it away after use. By the way, the Internet Movie Firearms Database provides a first-class overview of firearms, not only from Bond films – there you can also find many detailed photos of the guns in use.

Of course, it has not yet been decided how James Bond will be revived after his death in No Time to Die and how he will be re-armed, not to mention the next actor or actress. 007 creator Ian Fleming probably did not plan this far in advance, but as long as Barbara Broccoli continues to be involved in EON-Film and the Bond franchise, there will certainly be at least one Walther pistol involved. So at Walther, they are again waiting for the famous call from the set.