An over one hundred years old cartridge, the Swedish born 6,5x55 SE round still remains a queen on the hunting ammunition market due to its exceptional accuracy and stopping power

The 6,5x55mm caliber M-1896 bolt-action rifle was the Swedish Army's standard service rifle until it was replaced by the Ljungman AG-42 autoloader

The 6,5x55 Swedish caliber (or, more correctly, 6,5x55mm Swedish Mauser cartridge) was adopted by the Swedish Army in 1894 and used in many service rifles − most notably the Carl Gustafs "Swedish Mauser", an extremely accurate bolt-action rifle and still today a highly coveted item between gun collectors.

The 6,5x55 SE is one of those intermediate calibers adopted by many European armies just before World War I and used in both world wars − a long list that includes the Italian 6,5x52mm Mannlicher-Carcano round and the Austrian 6,5x54mm Mannlicher-Schönauer cartridge.

The 6,5x55 SE cartridge is heavily patterned after the wonderful 7x57mm Mauser round, to which it is similar under many points of view, with one notable difference: its larger base tells it apart from basically all other rounds of its class. 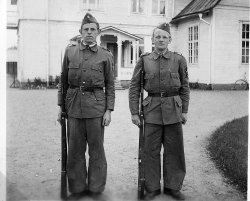 The case of the 6,5x55 SE round is 55 millimetres long, and its size and proportions compared to the caliber make it an extremely well-balanced round.

As military issue rounds evolved during the years and new NATO standard were phased in, the 6,5x55 SE was eventually replaced in Swedish service; thanks to its excellent performance levels, however, it remains a widely popular round between sport shooters and hunters alike.

Of all the hunting and sporting calibers currently available on the market and initially conceived for military purposes, the 6,5x55 SE is definitely the one that's been used the most outside of its initial, purely military purposes.

The 6,5x55 SE proved itself an extremely highly accurate cartridge over time, but that's not all. Just like all 6,5mm calibers using long and tapered bullets with a very high sectional density, the 6,5x55 SE offers top-notch penetration capabilities and a strong resistance to crosswind components.

All said features are highly regarded by sport shooters and hunters alike: among other thingss, the 6,5x55 SE is known as a popular "clean killer" for big game, and an excellent performer even in sport shooting or hunting situations that would give higher calibers a run for their money. 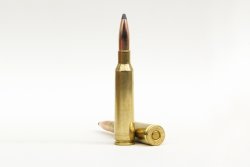 Norma Precision AB
A 6,5x55mm SE round as manufactured in Sweden by Norma − featuring a Nosler SP 140-grains bullet

The 6,5x55 SE caliber is a compact, well-balanced round, featuring a neatly proportioned case with slightly conic walls and a neck long enough to fit balls ranging between 90 and 160 grains in weight.

Thanks to the ratio between the case structure and the ball weight, reloading enthusiasts can easily turn to many of the most widely available commercial propellants without risking any trouble.

The best possible performance for the 6,5x55 SE cartridge are obtained through the use of bullets between 120 and 140 grains in weight: if well loaded, they'll provide an extreme degree of accuracy. It will still fare very good with 160-grains, heavyweight bullets − that is, if progressive propellants are used.

The typical initial velocity factor for 6,5x55 SE loads using 140-grains bullets range around 820 metres-per-seconds, with pressure levels very close to the 3900 Bar threshold. That's a quite modest amount of pressure, ensuring a low barrel wear and a very good service life for the gun overall.

Despite its 120 years of life, the 6,5x55 SE round is still extremely popular and well capable to provide satisfaction to its users both at the shooting range and on the hunting fields. It is indeed a widely accepted alternative in shooting competitions − due to the introduction of an enormous number of surplus rifles chambered in 6,5x55 SE on the civilian market, years ago − and several shooting federations were forced to create a category for Carl Gustafs rifles from the ground up, to stop shooters who use this kind of guns from winning every trophy in all competitions!

Needless to say, the 6,5x55 SE caliber is also vastly popular in hunting − particularly in northern Europe and Scandinavia, where it rules the big game hunting fields against challenging preys such as moose.

The 6,5x55 SE round is actually well suited against most ungulates in Europe and north America alike − counting out some of the biggest ones − as well as against some lightly-skinned American preys. In southern Europe it is a popular alternative for some selective hunting preys: roe deer, fallow deer and wild boar. Its mild recoil allows the shooter to concentrate on the target without worrying too much about his or her shoulder.

Most modern bolt-action rifles manufacturers have at least one model in 6,5x55 SE in their catalogue − and of course, once again, there is a plethora of mil-surplus rifles to choose from. Factory loads are not just as common and diversified as .30-06 Springfield, but still easily found in gun shops mostly everywhere − both in hunting-oriented and Match variants.

Armémuseum
One of the most fascinating military rifles chambered for the 6,5x55mm SE caliber currently available on the collectors' market: the rare Automatgevär m-1942, also known as the Ljungman AG-42 semi-automatic rifle, officially remained the standard service rifle for the Swedish Army from 1942 to 1960 despite never reaching mass distribution

The typically European 6,5 and 8mm calibers never found massive acceptance between U.S. hunters and shooters − and 6,5x55 SE is no exception.

Hand-reloading allows shooters to boost considerably the accuracy and performance threshold of this marvelous round. There's a wide array of reloading-oriented bullets currently available on the market, in a plethora of varieties and weight ranges, and Match-grade bullets are now more vastly available than ever.

No problem whatsoever when it comes to the choice of the right powder: the 6,5x55 SE will perform well with a vast amount of currently available propellants. The only problem would be to find a proper shell-holder: a .308-class one just wouldn't do, as the base of the cartridge case for the 6,5x55 SE is wider than that of the most directly comparable rounds.

Some examples of reloading specs for the 6,5x55 SE caliber

Subscribe to the Newsletter
This article is also available in this language:
IT
Click here for more information on the topics:
6,5x55SELong range shootingUngulate