There is some confusion about these important accessories which perform different functions on firearms. Let’s see how they work.

There are a lot of gun accessories available out there today. Some accessories are necessary, while some are just accessories people buy to make their weapon look a little more “tacticool”. In this article we look at three accessories that can make a difference to your shooting, but that sometimes can be confusing in terms of whether they perhaps actually perform the same function.

We look at muzzle brakes, compensators and flash hiders to determine the difference between them, and when you would use each of them. 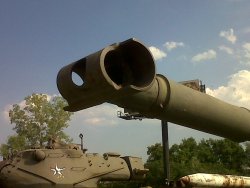 Muzzle brakes were originally developed for military use and were commonly mounted on tank guns.

How can you tell that it's a movie and not real life? Because Arnie or Sly or Dolph has leapt from the plane and is hosing around ammo without worrying about recoil or the barrel jerking around! In real life, one of the ways that we non-action heroes deal with this problem is with a muzzle brake. Muzzle brakes are devices that redirect energy to reduce recoil and kickback in firearms.

Muzzle brakes were originally developed for military use and were commonly mounted on tanks. Modified over the years, muzzle brakes can now even fit pistols and are often used at competitive shooting events.

When any firearm is fired, exiting propellant gases naturally cause the front end of that firearm to rise. When the gun in question is a hand-held one, this means a loss of control. The concept behind a muzzle brake is that it diverts gases caused by firing away from the muzzle, preventing muzzle rise. And by placing this device directly on the muzzle, the inertia that it creates reduces recoil as well.
While the basic design concept for muzzle brakes is universal, there are some variations. Originally, these brakes were positioned dead center on firearm muzzles. Because many modern rifles today have a right twisting action, most muzzle brakes are positioned slightly right off center.

The Pros and Cons of using muzzle brakes:

Are there some types of firearms that a muzzle brake is an essential piece of equipment for? While not all firearms absolutely require them, this device does noticeably reduce issues that can affect gun performance.

Many shooters have the impression that compensator and muzzle brake are two different names for the same device. This is incorrect. True muzzle brakes both prevent muzzle lift and reduce recoil. True compensators are meant to only reduce muzzle lift. It is possible that a shooter might notice some recoil reduction in a firearm while using a true compensator. But this reduction is slight, and the recoil is being directed away from the weapon as opposed to truly being stopped. Shooters should be aware that most compensators being manufactured today now have side ports. These cause newer compensators to function as true muzzle brakes, preventing muzzle rise and achieving real recoil reduction. Because of this, prudent shooters should always be aware of the age of the compensator that they are using.
Compensators look very much like muzzle brakes, which is why these two devices are assumed to be the same thing. The two standard designs are multi holed tubes and one hole styles, which are flatter.

The Pros and Cons of using compensators:

Unlike muzzle brakes for some firearm types, compensators aren't a mandatory piece of equipment. In fact, the compensator can be downright controversial in some shooter circles, which can be broken down into three main factions:

Ultimately, compensators are a matter of personal tastes and needs. Powerful, large caliber rifles and handguns generally get the best results with compensators. 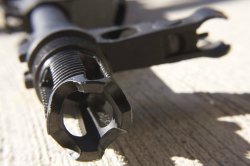 When firing some powder doesn't burn up in the barrel, creating a large flashing effect that obscures a shooter's vision and disrupts subsequent shots. Flash hiders prevent this flash from occurring.

If you've purchased an AR 15 or any other type of rifle with a threaded barrel, then you already own a flash hider, as it came with the gun. Why? Contemporary rifle designs are all based on military ones. The size difference in barrels and cartridges with these firearms means that some powder doesn't burn up in the barrel, creating a large flashing effect that obscures a shooter's vision and disrupts subsequent shots. A flash hider prevent this flash diverting and dispersing the burning gases that exit the muzzle.

The Pros and Cons of flash hiders: 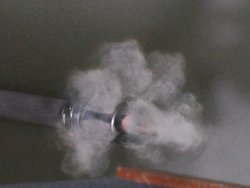 A flash hider diverting and dispersing the burning gases that exit the muzzle.

Are you using a modern rifle with a threaded barrel that's less than 20 inches long? Do you want to be able to see after firing? Then some type of flash hider is a must. Regarding handguns, manufacturer Vortex makes one for its .45 USP. However, because of shorter barrels, flash hiders are generally ineffective for handguns.
Muzzle brakes produce a sound that can seriously and permanently damage hearing. Protection should be used with them and all other "suppression" devices. In some countries, flash hiders cause firearms to be categorized as military weapons. Check on restrictions before traveling. And only muzzle brakes can effectively reduce gun recoil.

Joe Bradley is the editor for smokingbarrelusa.com, which is aimed at promoting responsible gun ownership as well as debunking myths about guns and gun owners.