A true shooting heritage: established in 1939, the world's largest supplier of firearms parts and components, accessories, and related tools turns 75 and celebrates at the 2014 SHOT Show!

Brownells, Inc.
The 75th anniversary of Brownells was celebrated in grand style at the company booth, at the 2014 SHOT Show!

2014 will be a year of great celebrations for Brownells! The "World's Largest Supplier of Firearms Accessories, Ammunition and Gunsmithing Tools", established in 1939, turned 75 and kicked off a year-long anniversary celebration – starting with the 2014 SHOT Show, which took place January 14th  through 17th at the Sands Expo Center in Las Vegas.

The first SHOT Show attendees who visited Brownells' booth – one of the busiest at the Show! – had a chance to pick up a limited-supply 75th Anniversary Commemorative Coin; the company also had some of the newest add-ons to its catalogue on display – a catalogue that today offers the world's widest available selection of firearm components and parts, firearm-related and shooting accessories, and gunsmithing tools, with over 80.000 entries overall: factory parts from fifteen of the industry’s leading firearms manufacturers; rifle, shotgun, and handgun parts, tools and accessories; blueing and refinishing materials; books, videos, and references; sights, scopes, and mounts; and much more... most not even being ITAR-restricted, and thus free to commerce, purchase, and export worldwide, with a potential – and factive – consumers basin that comprises literally millions of sports shooters, hunters, and professionals around the globe! 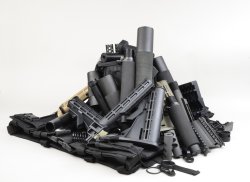 The Brownells five and 10-round AR-15 magazines took center-stage at the booth. Designed for compliance in limited-capacity States and jurisdictions, these magazines are built to Brownells' exacting standards.

The magazine body has been shortened and redesigned to allow for only a five or 10-round count. A black waffled polymer body extension has been added to provide a positive gripping surface for removal from the mag well, making the overall length approximately the same as the Brownells' own 20-rounds AR magazines; these new low-cap mags will be available by February 2014.

Other products being featured included the Brownells 9mm AR-15 magazines, and 3-Gun Shotgun Choke sets. As always, Brownells had a team of its highly knowledgeable Gun Techs at the booth to help answer technical questions. 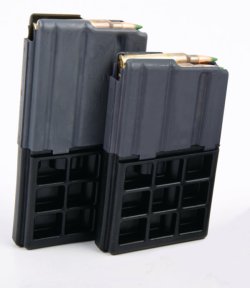 Brownells, Inc.
One of the newest addition to Brownells' product catalog: 5-rds and 10-rds magazines for AR-15 rifles and carbines

"We're excited and mighty pleased about going to SHOT Show this year," said Frank Brownell, Chairman of Brownells and nephew of Bob Brownell, the company founder.

"It'll be an extra special one for us because this is our 75th Anniversary Year."

The Brownells brand went a long way since its first catalog, the legendary Number One, was sent to customers in 1947; and even more since Bob Brownell - a middle-America businessman and devoted shooter and outdoorsman out of Montezuma, Iowa - added gunsmithing to his list of businesses in 1938.

Today, as Brownells enters its 75th year in business, the company owes its success to Bob‘s three basic founding principles: provide customers with the widest selection of products on the market; deliver them with the highest level of customer service; and guarantee customers‘ satisfaction – FOREVER – with a 100%, no-questions-asked, money-back guarantee.