The Steel Action HS combines two features that make it ideal for driven hunts: a lightning-fast straight-pull bolt action and an adjustable stock for equally fast aiming. all4hunters.com has tested what the hunting rifle in .308 Winchester caliber can do – and results are quire interesting...

When the .308 Winchester Steel Action HS arrived at our editorial office, it was like seeing an old friend again: you recognize each other, but one little thing has changed. In the case of the HS (Hunting Short), we had an earlier contact in June 2017, when the bolt action rifles of the Steel Action brand were fresh on the market.

But it didn't take the testers long to notice the change compared to that time, since the separate cheek piece and the screws underneath are easy to spot – the Steel Action HS is now available with an adjustable stock. With its lightning fast straight-pull bolt action, the rifle literally screams to come along on the hunt for movement. And here, in addition to the aforementioned quick action system, something else is also important: an intuitive and quick stock adjustment system, so that you can concentrate on the target acquisition itself. 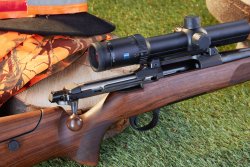 But right from the start: the rifle is manufactured by the name-giving Steel Action company based in Cologne, Germany. In addition to the HS model, they also manufacture the HM (Hunting Medium) model – both, mind you, completely made in Germany. The names of the rifles indicate the caliber groups in which they are available. In addition to the rifles themselves, there are various stock options and accessories such as silencers, muzzle brakes and optics mounts.

As said, the HS model in the widely used and versatile .308 Winchester caliber and with the new stock was chosen as the test gun. The action is completely made out of steel. It made a very valuable and precisely manufactured impression during the first, dry-fire attempts. The action locks via a three-lug rotating bolt. This is operated by the bolt handle during the pulling or advancing movement in the repeating cycle. The lugs then lock in a locking sleeve.

The shooter can cock or decock the rifle very easily: pressing the button on the bolt rear cocks the gun. If no shot is fired, the button acts as a decocker.

The Test-Steel Action HS also came with a Picatinny-style mounting rail, but without iron sights. The latter might disturb the one or the other huntsman on a gun mainly used for driven hunts. But let's be honest: how often are iron sights still used for driven hunts today? From the testers ' point of view, quite seldom, so they don't see a problem here. The muzzle is also up with the times, because there is an M15x1 thread under a protective cap. Here the hunter can mount a silencer or reduce the already low recoil of the .308 with an appropriate muzzle brake. 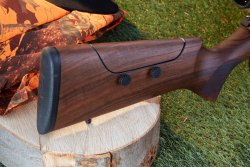 Marcus Heilscher, © VISIER
The adjustable stock of the Steel Action HS in "original condition". With the screws and the cut-out cheek piece you can see the adjustment potential immediately.


The latest innovation from Steel Action is the stock that can be adjusted in several ways. This means that it consists of two parts, the main section and the cheek piece. The latter is enthroned on two rods, that connect it to the lower section. At the edge of the connection point are two screws. They are used to adjust the height of the cheek piece and can be manipulated easily without the use of tools.

For side adjustment, however, tools must be used: first pull out the cheek piece a little. When the cheek piece stands a little out of the lower part, holes will appear in the rods. The tool supplied can be inserted through these to loosen them. Now the cheek piece can be perfectly adjusted to the body shape and physique of the shooter.

But what are the advantages? From the testers' point of view, there are two considerable advantages in having a cheek piece that is so well adapted to your own person. On the one hand, the gun can be adjusted so that the shooter's eye is immediately in the line of sight in case of quick firing. Without this point of reference, it is often necessary to invest a lot of work and training in one's own muscle memory in order to be able to look through the scope reliably and consistently. At least without having to make corrections.

Moreover, this also offers a great advantage when shooting statically: the shooter gets more support in his or her own posture because the muscles do not have to deal with the correction of head and body posture – better target results follow as a consequence. It is not for nothing that highly developed competition rifles can be adapted to the athlete's body in every detail.

A side note: stock adjustment of the Steel Action HS 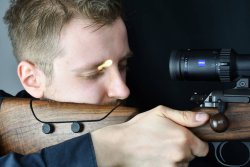 Christian Wagner, © VISIER
In the factory setting, the stock does not fit the shooter: the point projected onto the shooter by a flashlight is clearly visible next to the shooter's pupil. Good to see: the head is too low and to the right.


There are several methods to find the optimal alignment of the cheek piece. Unfortunately, two of them turned out to be rather cumbersome and inaccurate. One possibility is to roughly adjust the gun, then (blindly) take it into the firing position and correct it so often until the eye is directly in the target line while standing comfortably.

Another method may be to take the gun into the aiming position and then ask a second person to make the adjustment by feeling and eye. However, the accuracy is not as good as it could be and a lot of corrections have to be made.

The ideal solution (also recommended by the manufacturer): the shooter brings the gun with the optics mounted to aiming position. The shooter keeps his/her eyes closed. A second person then shines a frontal light through the scope. The light coming out of the optic eyepiece to the rear then shows the target line in the ideal aiming position. In this way, the stock can be precisely adjusted – the principle is similar to shooting the gun. 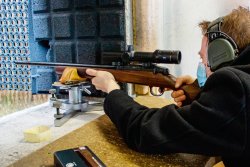 Chris Schönfeld, © VISIER
Steel Action HS in .308 Winchester at the ready: for the accuracy test, the bolt-action rifle went to the 100-meter firing line.

With the Zeiss Conquest V6 1.1-6x24 mounted, suitable for driven hunts, we went to the shooting range and then onto the 100 m line. The testers shot five loads ranging from 136 to 168 grains.

The winner was the full metal jacket bullet from Sellier & Bellot, closely followed by the partially jacketed lead bullet from the same manufacturer. Without a breakaway, this would have even won with an impressive 0.27”/7 mm grouping.

In general, the gun fires very pleasantly – also thanks to the caliber. The adjustable stock could, as already suspected, provide an extra-solid aiming support. Cycling was also lightning fast. Just one thing is worth of note: be careful not to manipulate the bolt too softly.

Under certain circumstances, the gun may not lock completely and therefore no shot can be fired. The testers recommend to manipulate it calmly with the necessary momentum – that's what the rifle is made for.

Our conclusion on the Steel Action HS

The rifle delivers what the manufacturer Steel Action promises: solid and high-quality craftsmanship, and stock adjustment is effective. The bolt action works perfectly and, above all, fast – with the necessary momentum. Accuracy is also unusually good for a hunting rifle. Price is within the usual range and is completely ok. If you are looking for a straight-pull bolt-action rifle with modern features, you should definitely take a closer look at the Steel Action HS.

Subscribe to the Newsletter
This article is also available in this language:
DE
Click here for more information on the topics:
Bolt-action riflesHunting RiflesRifles.308 WinchesterTest
That might interest you too: 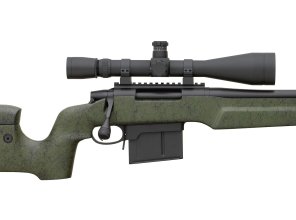