With its 6x zoom, the Presidio 3-18x50 riflescope offers a magnification range that is particularly suitable for medium to long range shooting. Thus, this new riflescope from the range of the U.S. optics specialist Sightmark is ideal for a variety of long guns, including hunting rifles, but also ARs and precision repeaters. We are focusing our attention here primarily on the Presidio 3-18x50 MR2 FFP model, which is interesting for hunters and costs only around 550 euros in Europe.

A contribution from Andreas Wilhelmus01/09/2023 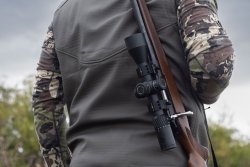 Sellmark - Sightmark
The Sightmark Presidio 3-18x50 MR2 FFP is a compact riflescope with 6x zoom, which can also be fitted on a classic hunting repeater.

The price is hot – but what can the scope offer in practice? We give an answer to this question here. Sightmark launches the Presidio 3-18x50 with the two reticle variants LR2 FFP and MR2 FFP, each of which is located in the first image plane. In both models, the MIL – or more precisely, MRAD-based – reticle can be illuminated in red. But before we turn to the optical features, let's first take a look at the mechanical components of the new Sightmark Presidio 3-18x50. 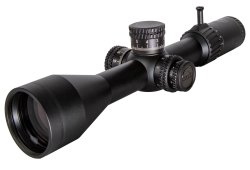 Sellmark - Sightmark
All controls on the Presidio 3-18x50 feature grippy, angled grooves and can be moved easily. Sightmark includes the already mounted throw lever on the zoom ring in the scope box from the factory.

The diopter adjustment is made, as is generally the case, on a ring directly on the eyepiece. It ranges here from -2 to +2 dpt. The magnification is also selected operating a ring. This is located directly in front of the transition from the eyepiece tube to the main tube. The latter has a diameter of 30 mm. The zoom ring has a slightly raised fin just before the mark for 8x magnification, which makes it even easier to grip the ring securely. In addition, this fin has a threaded hole, into which a supplied 2 cm long quick adjustment throw lever can be screwed if necessary, as is familiar from the tactical field. The adjustment turrets are sufficiently large and, like all adjustment elements, have easy-grip grooves, all of which are angled in this case. All adjustment and setting rings do not require rubber armoring and are also made of matte black, hard-anodized and robust aircraft aluminum to match the housing. In addition, all these elements, with the exception of the diopter ring, have easy-to-read and clearly labeled scales with white numbers and letters. At the diopter adjustment you have to look more closely. Only the zero mark on the ring is clearly visible. The indication of the direction of rotation on the top of the eyepiece housing is kept in glossy black and hardly stands out from the matte black finish of this component, as do the two Sightmark lettering on its sides in the same color and the Presidio logo on the top. 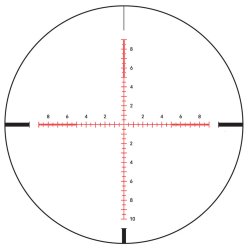 Sellmark - Sightmark
The Presidio 3-18x56 MR2 FFP's MRAD-based reticle is in the 1st image plane, but has such fine crosshairs that even at maximum magnification, little of the target is obscured.

Our test scope works with the reticle in the first focal plane (FFP), which is called "MR2" by Sightmark – when increasing the magnification, the reticle is also magnified. However, this is no longer a problem with most current FFP riflescopes. Thanks to modern manufacturing techniques, the etched reticles are now so "fine" even at maximum magnification that, unlike earlier models, they hardly obscure any more of the target than is the case with a classic 4-position reticle in the second image plane. Thus, in the MR2 reticle of the Presidio, the two crosshairs of the reticle and the bars of the integrated fence-like aiming marks have a very thin line width of 0.03 MRAD, thus covering only 3 mm of the target at a distance of 100 m each. Incidentally, the MR2 reticle in this Presidio model is a slightly modified version of the MR2 reticle already used in the Sightmark Citadel series. In the Presidio, only continuous crosshairs replaces the free-standing central aiming point between the crosshairs familiar from the Citadel. Compared to its MR2 counterpart, the Presidio's LR2 reticle also has windage marks arranged like a Christmas tree on either side of the central vertical crosshair in the lower half of the reticle. 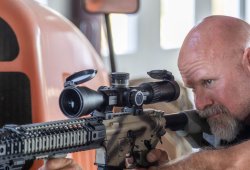 Sellmark - Sightmark
The new Sightmark scopes are also suitable for modern semi-autos. Here a Presidio 3-18x50 LR2 FFP on an AR. The flip-up protective covers for the objective and eyepiece are included.

Matching the reticle, the click adjustment on the windage and elevation turret also uses the metric-based MRAD system. With the clearly perceptible and audible 0.1 MRAD click adjustment, the reticle moves by 1 cm at a distance of 100 m each time. The click adjustment works cleanly and smoothly, but is not too smooth, so that the adjustment does not require separate protective caps or locking and can be made directly on the turret caps. The adjustment caps can also be zeroed if necessary after loosening three small grub screws using the included Allen key. Sightmark specifies the maximum adjustment range for both windage and elevation adjustment as 26 MRAD each, i.e. 260 cm at 100 meters. In the case of this riflescope, the windage turret could even be adjusted 155 clicks to the right and left, for a total of 310 cm at 100 meters. With the elevation turret, it was 170 clicks due to an internal limiter ring, but after repositioning the limiter, we ended up with the promised 260 clicks. 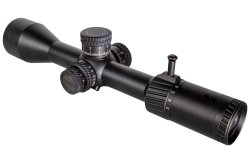 Sellmark - Sightmark
On the Presidio 3-18x50 MR2 FFP and LR2 FFP riflescope models, the reticle illumination control is located on the left turret along with the parallax adjustment.

On the left turret, on the parallax adjustment directly attached to the housing, there is also the regulator including battery compartment for the reticle illumination. The parallax adjustment ranges from 10 yds (~ 0.91 m) to infinity. Reticle illumination can be adjusted to a total of six different intensity settings using the rotary control and can thus be adapted to pretty much all brightness and background scenarios. Between each level is a zero position for turning off the illumination, so that the last intensity used can be quickly retrieved if necessary. The whole thing is powered by a standard CR2032 Li 3V coin cell battery, which Sightmark says should last for 150 to 500 hours of operation. One battery is included in the scope of delivery. The battery compartment can be screwed on comfortably and without tools thanks to an easy-to-grip, rimmed edge.

By the way, the manufacturer specifies the range of use of the target optic for loads up to .338 caliber. A nitrogen filling inside the housing ensures that the lenses cannot fog up. Our first impression: the optical performance of the Sightmark Presidio 3-18x50 is quite convincing for a riflescope in this price range. However, in the peripheral area, the image does start to become blurry and also slightly distorted. In addition, there is in particular a color fringe going into the yellow-green at the image transitions from bright to dark objects. Beyond that, the glass delivers a high-contrast and very true-to-color image, so that overall the scope can fully fulfill its purpose for daytime shooting and at the shooting range. At dusk, however, the inexpensive Sightmark riflescope, despite multi-coated lenses, reaches its limits at some point and cannot replace high-quality hunting optics for evening twilight or night hunting. But such premium optics cost finally also five to six times as much as the Sightmark Presidio 3-18x50 MR2 FFP offered in the European area for about 550 euro, which besides the necessary tools and the battery, also includes flip-up protective covers for the objective and eyepiece lenses. 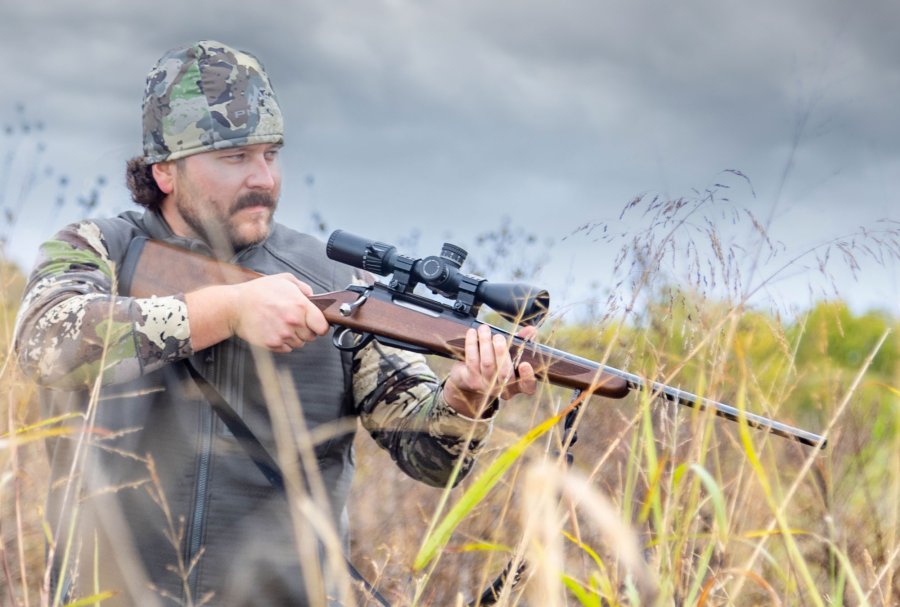 * Due to different VAT and import fee rates, price differences may occur in individual EU countries.

Our test conclusion on the Sightmark Presidio 3-18x50 MR2 FFP

All in all, with the new Presidio 3-18x50 MR2 FFP Sightmark delivers an absolutely range-ready and robust riflescope for use up to medium ranges and long but not extremely long ranges. For long ranges, the variant with the LR2 reticle, supplemented by a mount with appropriate pre-tilt, is certainly the better choice. But as a daylight optic for hunting, the Sightmark Presidio 3-18x50 MR2 FFP, which is very fairly priced, is sure to find many a fan among hunters. Its weakness in twilight could possibly be compensated for by a corresponding night-vision compatible clip-on.

For more information on the new Presidio series scopes and other target optics please visit the Sightmark website. 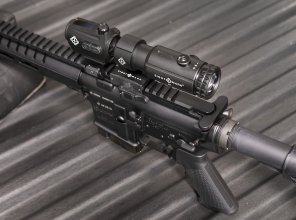 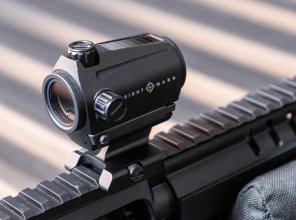 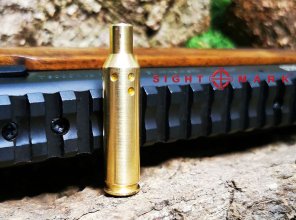 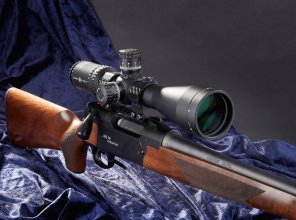 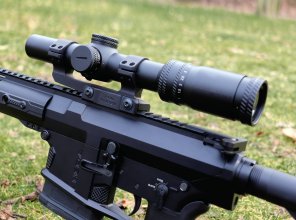 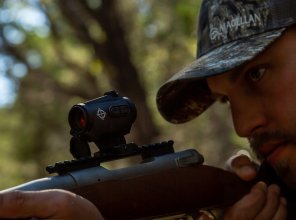 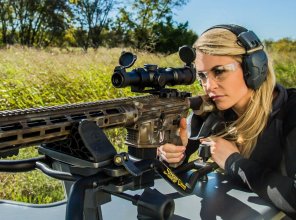 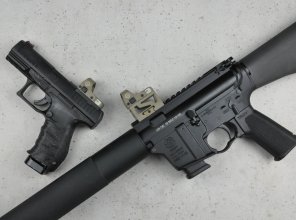