ERA Silencer / Recknagel offers not only a range of a total of four different silencer models but also a real innovation: in combination with the ERA LOC quick release the hunter has the opportunity to rely on a very easy-to-use complete system. We have taken a closer look at the silencers and the quick release system.

Seemingly endless screwing and unscrewing of the silencer before and after the hunt, trouble with thread types on different rifles – ERA Silencer from Recknagel finally puts an end to that. The solution to the problem is called ERA LOC. This is a quick release system consisting of various elements which, in combination with the ERA Silencers, offers an all-round carefree package for every rifle with a muzzle thread. Let's look at ERA LOC in detail.

ERA LOC basically consists of two different elements: one on the gun and one on the corresponding attachment. On the gun side, a barrel threaded adapter is attached to the muzzle in order to use the system. The prerequisite for this is an existing thread. These muzzle adapters are available in a long and a short version. The short version is available for muzzle threads M13x1, M14x1, M15x1, 1/2″-20 UNF and 1/2″-28 UNEF. The long, on the other hand, is for M16x1, M17x1, M18x1 and 5/8″-24 UNEF. The threaded bushing can then be placed on the muzzle simply by turning it 60 degrees.

Here, Recknagel is technically flexible: if the hunter does not want or is not allowed to use a silencer, he can either cover the threaded bushing with a thread protection nut or simply use the ERA LOC muzzle brake. This is also designed to noticeably reduce recoil on its own. It is made of high-strength steel with a corrosion-resistant, manganese-phosphated finish. The muzzle brake can be used up to .375 caliber. The other option, of course, is to use one of the four ERA Silencers where silencers are allowed in hunting.

Of course, all this is also possible "in reverse". If the user has several rifles of different calibers and with different muzzle threads, he can simply equip them with the matching barrel thread adapter. In this way, the ERA muzzle accessories fit universally on all guns. But which ERA Silencers are available from Recknagel? 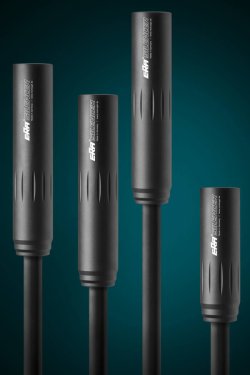 Recknagel offers a total of four different models under the ERA product brand, each with different areas of application or specialties. Basically, all models are so-called over-barrel silencers. This means that the silencers extends around the barrel when mounted, which shortens the overall length and makes the rifle significantly easier to handle with the silencer mounted. In addition, all models come with a MIL-SPEC surface coating and a replaceable threaded bushing. Each of the four silencers is also suitable for magnum calibers (the SOB 3D model from a barrel length of 58 millimeters).

The longest model is the SOB 1 with 145 millimeters beyond the muzzle. It is referred to by ERA Silencer as "The Powerful One". The SOB 1 provides high suppressing performance with minimized first-round pop (the term for the usually louder, first shot from a cold silencer). It is also suitable for magnum caliber firearms and comes with a weight of 387 grams.

The SOB 2, on the other hand, protrudes only 105 millimeters beyond the muzzle and is "the all-rounder". Its shorter length makes it particularly suitable for two scenarios: on a gun during driven hunts and tracking, and for rifles in powerful calibers where shortening the barrel is not an option. The model weighs 378 grams. 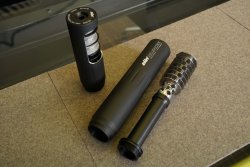 With steel inside: SOB 2S and SOB3D from ERA

The SOB 2S and SOB 3D models have one thing in common: both come with a steel interior. The 2S is a hybrid silencer with a core and baffle component made of hardened and tempered stainless steel. The outer wall of the model is also reinforced by ERA. Accordingly, it is referred to by the manufacturer as "the resilient one". It is particularly suitable for use at high rates of fire, for example in a shooting gallery. In addition, the rugged design naturally increases the service life of the silencer. However, this results in a somewhat higher weight: it weighs 520 grams. Just like its counterpart without the S, it provides a net extension of the rifle length of 105 millimeters.

© ERA Silencer
A look inside: sectional view of the ERA Silencer SOB 2S, “the resilient one”.

The SOB 3D, on the other hand, is completely different: it is the only model with an interior made of stainless steel mesh. This completely eliminates the first-round pop. It is also much more compact and lighter than its siblings, weighing in at just 326 grams. Nevertheless, it brings a high noise damping performance. Accordingly, ERA also calls it "the efficient one".

You can find out more about ERA LOC and the ERA Silencers on the Recknagel / ERA Silencer website.

Subscribe to the Newsletter
This article is also available in this language:
DE
Click here for more information on the topics:
AccessoriesHunting
That might interest you too: