Inertia-operated systems are loved for their beautiful simplicity in design, maintenance and cleaning. Above all, they work very well in shotguns. Let's talk about the origins and the technical details of the alternative to gas-operated systems.

Inertia-operated systems are historically interesting because they first appeared in the early course of development of automatic firearms, but then were quickly forgotten for more than half the century, to reappear with great success in hunting smoothbore guns during the 1970s and 1980s. Today, “Inertia-driven system” is a registered trademark of the famous Italian gun manufacturer Benelli Armi, which brought the inertia-operated shotgun back from oblivion in 1967.

However, as many of the original patents, owned by Benelli, now have expired, many other companies, mostly in Italy and Turkey now produce shotguns with similar systems.

Let’s take a closer look on the system and its origins.

Inertia is a fundamental property of every body that has a mass.

By physical definition, inertia is “a property of matter by which it continues in its existing state of rest or uniform motion in a straight line, unless that state is changed by an external force”. In layman terms, it’s a property that resists to any change of its static position or linear, non-accelerated movement in space.

When you fire a gun, its your body’s inertia that precludes your instant rearward movement under the recoil. Tendency of guns to recoil upon fire was noted by gun designers quite early on, and earliest gun-related patent of the famous British gun designer Hiram Maxim relied on the recoiling movement of the gun and the inertia of the shooters body to operate his semi-automatic conversion of the Winchester lever action rifle.

The first inertia-operated gun in modern sense was invented in Sweden by Carl Sjogren in around 1900. 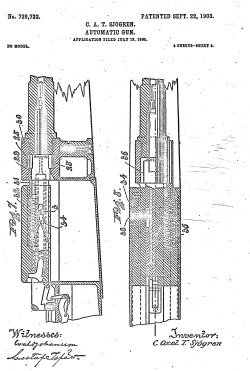 Image from US patent, issued to Carl Sjogren in 1903 for his inertia-operated gun design.

He applied for and received several patents for his design in Sweden and abroad, describing a long gun which can be cycled automatically using a separate weight or weights that “on account of their inertia do not partake of the recoil of the gun, but, relative to the latter, so to speak, move forward”.

This relative forward movement is then used to compress a heavy operating spring which, once its stored energy is sufficient to overcome the inertia of the weight, pushes it rearwards relative to the gun, thus unlocking and opening the breech, extracting and ejecting an empty shell and compressing a return spring.

Sjogren then went on to design a military rifle and a hunting shotgun based on his patents.

His semi-auto rifle was tested by several European armies but was rejected everywhere, while his shotgun was produced between 1907 and 1909 in Sweden and Dennmark.

The 1915 semi-automatic rifle by Mauser 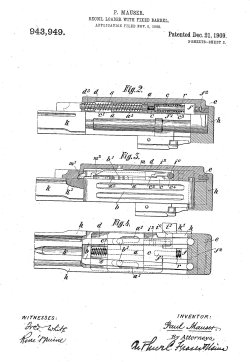 Image from patent, issued to waffenfabrik Mauser. It describes an inertia-unlocked rifle which was later produced for military use in 1915-1916 timeframe.

Starting about 1908, the German company Mauser also made a foray into the inertia-operated designs.

Their model 1915 semi-automatic rifle, however, was not a truly “inertia operated” gun in the modern sense, because inertia of the separate side was used only for unlocking the action, and the cycle was performed under the residual pressure in the chamber.

This rifle was overly complicated and not quite reliable, but nonetheless it has seen some military action during the Great War, mostly in the hands of German aviators (before the advent of the aircraft machine guns).

After the World War 1 most designers concentrated on more predictable and researched systems of operations, and inertia operated system quickly became obsolete.

How and when Benelli introduced the modern  “inertia driven” shotgun

Now, fast forward to 1966. That year Bruno Civolani, an Italian engineer working for Benelli Armi, applied for a patent describing an improved version of the inertia-operated system.

Instead of the separate “weight”, Civolani used the mass of the bolt carrier as an operating weight, and placed a powerful operating spring inside the carrier body, between its cavity and the rotating bolt head.

This allowed for a compact, simple and durable system which did not require moving barrels or a gas port(s), so it was noticeably simpler in production and maintenance than other existing semi-automatic shotgun systems.

The Benelli M1 Super 90 was an early “Tactical style” inertia operated shotgun from Benelli. It was highly successful in its time and spawned many further variations.

Also, nowadays quite a lot of companies produce their own versions of the inertia operated designs, but until very recently none of these were made for any rifle caliber ammunition.

And this is an interesting question – why no-one, including Benelli itself, has made a successful inertia-operated rifle over last 50 years?

Since we do not have the official answer from Benelli, we only can speculate that the key reason is that typical medium-power rifle cartridges (i.e. 308 Win) produce less recoil impulse than shotgun cartridges, and, probably even more important, this impulse is spread over shorter periods of time, because muzzle velocity for most rifle cartridges is about 2 times higher than for shotgun cartridges. Higher acceleration of the rifle recoil would then result in higher acceleration of the operating inertia mass, that in turn would require a powerful operating spring that would result in fast and violent opening action of the bolt group.

Ukrainian-made Snipex “Rhino hunter” can be called “quarter-automatic”, because it’s a single shot rifle with automatic breech opening and ejection and manual loading. It uses a strange combination of recoiling barrel and inertia-operated bolt.

The only one production rifle that sports inertia-operated action today is the new Ukrainian XADO Snipex “Rhino hunter”, a .50BMG single-shot monster that combines recoiling barrel (as a measure to decrease peak felt recoil) and an inertia-operated bolt group to unlock the action and extract and eject the fired case. It must be noted that this rifle is not truly a semi-automatic, because it has no magazine, and fresh cartridge has to be loaded by hand into the barrel, and then bolt has to be closed and locked manually. This rifle is scheduled for production in Ukraine to spring of 2017, and it is yet to be seen it it would live to expectations of its designers.

To sum it up, Inertia-operated system has proved itself as a simple, reliable and robust action for modern hunting and sporting shotguns. For tactical and military weapons it is less than ideal because it relies on a proper grip and recoil of the gun against the shooters’ shoulder, and combat situations may or may not provide necessary positions for reliable functioning of the gun (i.e., inertia-operated system would fail to cycle if the gun is rested against a solid and unmovable surface and thus not allowed to recoil). It is also not entirely suitable for rifles due to the more rapid and violent nature of rifle recoil. However, within specified constrains, this system works extremely well, and two of its most popular advantages are simplified and less time-consuming maintenance and cleaning procedures, compared to gas-operated shotguns.