"The rifle that won the West" is back: Winchester Repeating Arms reintroduces the lever-action model 1873 design!

The Model 73 is world-renowned as “The Gun that Won the West.” Now you can own the real thing — a genuine Winchester Repeating Arms Model 1873 with an oil-finished walnut stock, classic blued steel crescent buttplate and a 20" round barrel, just like the original. If you’re the type of collector who won’t settle for second best or a copy of a copy, fill your hands with this magnificent rifle, saddle up and blaze your trail into the sunset. For its introductory year, the Winchester Model 1873 lever-action sporter rifle is available in two models, the "Short Rifle" with a black finish and the "Special Case-Hardened" variant, with a case-hardening finish on the frame.

Winchester Repeating Arms
The Winchester mod.1873 will also be available in a special case-hardened variant

All of the Winchester Model 1873 variants will sport a set of astounding features, all reminescent of the original 1873 rifle that became popular in the last 30 years of the 19th Century as one of the most important tools that helped pioneers and settlers to complete exploration and construction of infrastructures in the great plains, deserts, mountains and shores west of the Mississippi river, after the American Civil War was gone. Directly spawned from the earlier mod.1866 "Yellow Boy", the Winchester Model 1873 lever-action rifle is definitely a piece of history in modern firearms technology and one of the most successful designs to exploit the − then recently introduced − invention of the metallic cartridge and to contribute to its diffusion. 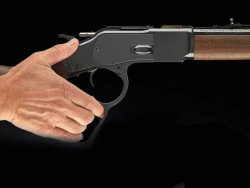 Winchester Repeating Arms
Like those of 140 years ago, the new prodiction Model 1873 rifles have "Winchester" engraved on the barrel

Winchester Repeating Arms
The beautiful look of the frame, top tang and hammer is preserved in every way

Cowboy Action Shooters, hunters, sports shooters in general will definitely love the reliable Model 1873, even more so because it fires the same ammo as the most commonly available revolvers sold worldwide, thus allowing their user to consistently save on ammunition. Manufacturer's suggested retail price for the Winchester Model 1873 lever-action rifle in its standard, black-finish variant, tops 1,299.99US$ in the United States of America, while the "Special Case Hardened" variant will go for 1,579.99US$ or a little more. The new-production Winchester Model 1873 lever-action rifles are already being distributed in the United States of America; availability and pricing outside of the U.S. should be investigated with the authorized FN-Browning-Winchester distributor in your Country; please link to the Winchester International website to find one close to you.