A proven action meets modern design – this is a fitting description of the new version of the HW 110 T. We took a close look at the new model and tell you what it is capable of. And what is it that makes Weihrauch products so popular? all4shooters.com is telling you.

For decades, the German company Weihrauch has stood for one thing above all: quality. This is proven not least by the numerous products that have fans all over the world. One of the flagships is still the air rifle range. In addition to the classic 177”/4.5 mm caliber, they are usually also available in 20”/5 mm or 22”/5.5 mm versions.

Weihrauch's products are among the leading ones, especially in certain fields of air rifle shooting. Above all, in field target shooting. Weihrauch has a wide range of air rifles for this hunting-like shooting discipline. One of them is the Weihrauch HW 110 T. 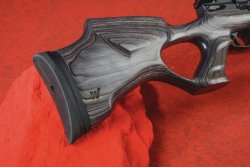 Ramon Wink
The grey thumbhole stock in the laminate wood version further enhances the value of the HW 110 T incense.

It is now also offered in a new version with a thumbhole stock. The advantage of this stock version is obvious, as it allows for more accurate shooting. Only when cocking it may be a little difficult, but this is not due to the gun. But what exactly did our team like?

The most striking feature, of course: the stock. A fine, grey laminated stock for right- and left-handed shooters with Weihrauch's “W” embossed on the rear end. The curved design harmonizes very nicely with the black action. The manual slide safety is on both sides, the cocking lever on the right. Ammunition is fed by a rotary drum magazine. 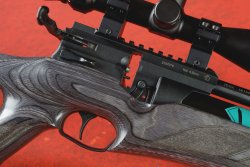 Ramon Wink
The cocking lever is located on the right side of the action. The air rifle is fed by a rotary drum magazine. In front of the opening is the slide safety.

At the top of the action is a rail on which optics can be mounted – the test gun supplied included an in-house riflescope, however this package is not sold as a set. Customers can order the accessories for the gun and also have the cocking lever mounted on the right or left. The black compressed air cartridge can be filled up to 200 bar, whereby the cartridge itself is built-in and can be connected to a corresponding bottle by means of an adapter. A bit unconventional in some countries, this system is especially widespread in the UK.

The barrel is threaded. Either a muzzle brake or the moderator included in the set can be attached there. This may sound a bit absurd at first, but this gun is also available in a FAC version and even a few thousand shots with an air rifle can damage your hearing. 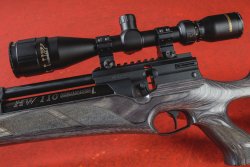 Ramon Wink
Included in the test set: the in-house manufactured Weihrauch riflescope. This can be easily mounted on the Picatinny rail of the HW 100 T.

Of course, the rifle with the new thumbhole stock had to prove itself in the practical test. By means of an adapter, filling the cartridge is very easy. Above all, the annoying twisting is no longer necessary, which in turn protects the thread. When reloading, it is important to ensure that the drum magazine is inserted the right way round and that the diabolos are pointing in the correct direction. 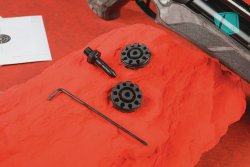 Ramon Wink
A long Allen key, two drum magazines and last but not least the adapter are included in the package of the HW 110 T.

At 10 and 15 meters we went to different cardboard bullseye targets and steel targets. The result was as expected: perfect. The riflescope provided a clean target picture, shots went off flawless. It was evident that the rifle could be aimed better than with a "normal" stock. The testers had nothing to complain about.

The pressure of the cartridge also allowed several magazine drums to be fired before the images of the hits overlapped on the cardboard targets and a new filling was necessary. We can say without hesitation that it was a successful test. Only cycling proved to be a little difficult, but this is probably due more to the small tester's hand than to the gun – it was tricky to operate the cocking lever, which moves the drum, all the way back and forward without taking the hand off the grip. But that was all there was to it.

Ramon Wink
The moderator from Weihrauch is one of the numerous options offered.

The gun action is one of Weihrauch's proven classics, especially when it comes to field target shooting. Ease of operation, craftsmanship and reliability are what makes the Weihrauch brand and what the customer can expect – and definitely gets.

Since you have a complete set, i.e. rifle, moderator and scope, the price is also okay. If you think it is too high, you should compare it with a similar set from the Far East. Afterwards you should compare their qualities. In addition, the customers don't have to buy the whole set, but can configure their desired gun in case of doubt – Weihrauch offers enough possibilities for this anyway.

As far as the stock is concerned, it ensures that the shooter has even more control. Especially when shooting at different ranges, when changing position again and again, every bit of control may be important. On top of that, the stock also looks chic and modern. This is how Weihrauch manages to get a little bit more out of a good rifle or a good set, and to convince some people of the quality of the brand from Germany.

Further information can be found on the Weihrauch website.

Subscribe to the Newsletter
This article is also available in this language:
DE
Click here for more information on the topics:
RiflesAirguns4,5 mm4,5 mmTest
That might interest you too: