Tokyo Marui, the company that invented modern Airsoft launches a MilSim replica of the compact model of the weapon system developed by FNH-USA for the U.S. Special Forces community

Those who are not familiar with the Tokyo Marui name, might as well know nothing about Airsoft. Tokyo Marui is in fact the progenitor of modern Airsoft: this company headquartered in the Adachi ward of Tokyo, Japan, invented the first electrically-powered mechanical gearbox back between the end of the 1980s and the early 1990s, when most, if not all, of other replicas were CO² or gas-powered. Tokyo Marui's first AEG was a licensed replica of the French FA-MAS rifle; so much time passed since then, yet Marui is widely known as the best Japanese Airsoft/MilSim manufacturer, with a product catalogue featuring over one hundred models between pistols, rifles and sub-machineguns, all so well manufactured and faithful to the original guns they're cloned from that the Asian, European and American movie industries started to use them more and more extensively all throughout the past twenty years as inert stand-ins, that being, for those scenes when a gun has to be shown but not fired, or when it has to come in such close contact with an actor that a blank-adapted weapon would be too dangerous to employ. 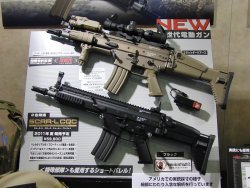 In its continuous effort to enhance its product line, Marui launched at the Shizuoka Hobbyshow of October 2011 a new replica that will see mass distribution only in the year 2012: an Airsoft clone of the SCAR-L CQC, the 12-inch barrel compact version of the SCAR assault rifle system that the FNH-USA developed for the United States Joint Special Operations Command (USSOCOM, or JSOC). This replica follows the launch of an Airsoft version of the “full-size” SCAR-L Mk.16-Mod.0 5,56mm-NATO assault rifle, which has been marketed by Marui itself for a couple of years now, while 2012 should also be see Marui launch a replica of the last version of the SCAR system, the 7,62x51mm SCAR-H Mk.17 battle rifle. All the Marui SCAR MilSim are high-quality products, featuring a metal upper receiver and a high-quality polymer lower with faithful M16-style pistol grips and side-folding/telescoping stocks. 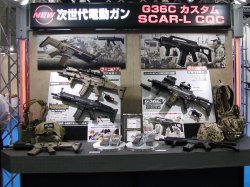 Tokyo Marui Co, Ltd.
The market demand for Marui products is high already... we might just as well imagine what will be the response to the launch of the SCAR-CQC replica

The Maruiʼs SCAR-CQC gearbox is powered through a removable and rechargeable battery pack, and its short barrel is much different, more reliable, than those already used by other competitors on the Airsoft/MilSim market in the construction of conversion kits for already-existing SCAR clones into SCAR-CQC versions, which mostly left their users down, at least partially. Thereʼs not much to say yet about the field performances of the Tokyo Marui SCAR-CQC, given how recent was its introduction and how the Marui company still has to solve some of the problems they recently experienced with some Asian subcontractors and parts/components suppliers. Plus, since most of the Marui production is absorbed by the national Japanese market, whose gun laws are so strict that gun enthusiasts have basically no other choice but to resort to Airsoft, we might have to wait a little more than expected before being able to spot the Tokyo Marui SCAR-CQC replica in the MilSim battlefields closer to us.