The Lee-Enfield No.4, the “utilitarian” rifle

A derivative of the venerable SMLE used in the trenches of the Great War, the British No.4 Rifle was never fully appreciated by its users. Yet it's a good rifle, just as sturdy and even more accurate than the old SMLE. Its only real flaws were the cartridge it was chambered for (the obsolete .303 caliber) and not being a self-loading rifle.

British military rifles have a style of their own. There's always something distinctive in their design, in their technical solutions, or the way they were adapted to contemporary military think. The Lee-Enfield No.4 Rifle, officially adopted only when World War 2 had already started, is no exception. Its history is somewhat peculiar, too.

A derivative of the venerable and much appreciated .303 caliber Short Magazine Lee-Enfield (SMLE), its slow development started in the years immediately after World War I. Why did the British War Office looked for a new service rifle? Actually, the SMLE was good indeed: the Lee bolt action, featuring rear-locking lugs and a detachable bolt-head, was the fastest and smoothest of all issue battle rifles of its time – a trained soldier could shoot 15-20 aimed rounds in a minute with no difficulty. Moreover, in the harsh conditions of the Great War trenches the rifle proved to be rugged, accurate and reliable. It even sported a 10-round, stripper clip-fed detachable magazine, as opposed to other famous issue rifles such as the German Mauser Gewehr 98, whose internal magazine held just 5 rounds. 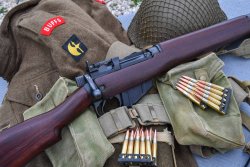 Franco Palamaro, © F.PALAMARO
The Rifle No.4 Mk I* in .303 caliber equipped the British and Commonwealth forces during the later stages of WW2.

So, what was wrong with the SMLE? Basically, it was expensive and time-consuming to make, and its production engineering was stuck in the late 19th-early 20th century technology. That's why in the 1920s they tried to introduce many modifications and simplifications. In the meanwhile, in 1926 they had also changed the official nomenclature: the SMLE became the “Rifle No.1 Mk III” or “Mk III*” (earlier marks were declared obsolete) and when the new gun was ready for trials, in the 1930s, it was called Rifle No.4 Mk I. Some further simplifications in 1942 – including a simplified bolt release – led to the No.4 Mk I* model.

By the way, in case you wonder why the new rifle was named “Number 4”: the “Rifle No. 2” designation was already reserved for .22 rimfire-converted training rifles, while the “Rifle No.3” was the brilliant yet unlucky “Pattern 1914 Rifle” that, after having been modified and rechambered in .30-06 caliber, became the "United States Rifle, cal .30, Model of 1917”, equipping most of the American Expeditionary Force in WWI.

The product of a double failure

When it was finally adopted in 1941, the No.4 rifle was in a sense the product of a double failure on the part of the British military: the inability to develop a reliable self-loading rifle and the failure in introducing a more modern caliber in place of the old .303 cartridge, which was still based on an obsolete rimmed case. They had tried to do both things, in fact – the rebated-rim .276 Enfield cartridge had been developed since 1912, but it was never adopted. 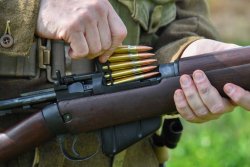 Franco Palamaro, © F.PALAMARO
The No.4 is loaded using 5-round stripper clips. The detachable magazine can hold 10 rounds,

Anyway, when it was finally issued the No.4 was an improvement on the No.1 with which British soldiers had been fighting in the first two years of the conflict. The No.4 took the better features of the SMLE, but was less expensive and quicker to manufacture. In particular, it had a heavier floating barrel, a different forend without the distinctive nose cap of the SMLE, and better "peep" sights of aperture type (the No.1 rifle backsight was a narrow “U” notch) and with a longer sight radius. Four different backsight types were used, including a double-aperture only simplified version (the Mk 2).

Yet, the Rifle No.4 was never as popular among British soldiers as its predecessor, the SMLE / No.1, due to its somewhat simplified and more “industrial” construction. Even the imposing and shiny sword-bayonet of the Great War had been replaced by a very cheap-looking, black-painted spike version, colloquially known as the “pigsticker”. A bladed version war later issued, but it did little to boost morale. 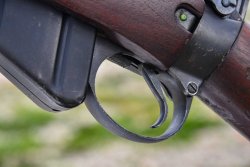 Franco Palamaro, © F.PALAMARO
The magazine release lever is inside the trigger guard, in front of the trigger. Magazines were detached for cleaning and maintenance only and not for “quick reloading” as in modern rifles.

Depending on the manufacturer and date, in the No.4 rifles you can find 6, 5, 4, 3 and even 2 grooved barrels, both left hand and right hand twist. Our rifle had the more common 5-groove, left hand twist barrel, and is equipped with a Mk 4 sight with Mk III diopter leaf. No.4 rifles can also be found in a variety of finishes, ranging from good to outright crude: the better finished ones are usually the Canadian-made rifles, like ours. 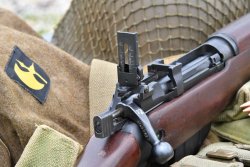 Even if the No.4 Rifle is slightly heavier than the SMLE / No.1, balance is good. Bolt operation is as fast, light and smooth as can be expected from a Lee action. Trigger in the rifle we tested was surprisingly good – at least compared to other SMLEs and No.4s we fired in the past. Trigger break point is quite easy to detect, consistent and fairly crisp, while pull is moderate in length and weight. Recoil is similar to other military rifles of the era: not exactly mild, but easy to manage with some practice. Muzzle flip is also moderate. In the video we just lightly control recoil to fully show its dynamics.

Since this was not an accuracy test and we already knew the rifle, we did not shoot a lot of ammo. Suffice it to say that if you learn how to master the back sight, No.4 rifles can be rewarding on the range too.

Enjoy our video: fire test of the No.4 Rifle

The uniform: the Battledress 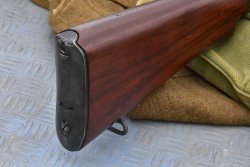 Franco Palamaro, © F.PALAMARO
The steel buttplate that on some No.4s replaces the SMLE's brass one.

Some notes about the uniform we wore during our test:  just before the war the British developed a smart looking uniform designed to meet the needs of modern mechanized infantry. Made from wool serge, it was composed of a short jacket (“blouse”) with two pleated breast pockets and high-waisted trousers with two side pockets, one back pocket and a large “map pocket” on the left front thigh, plus a smaller “dressing” pocket on the front of the right hip. All buttons were covered. Simply named “Battledress, Serge”, the first version is commonly although incorrectly known to collectors as “1937 Pattern”. The cut was slightly modified and simplified in 1940 (“1940 Pattern”), and once again in 1942 to save on material and speed up production. The 1942 version, officially named “Utility” (or “Austerity”) Pattern but sometimes also found with “1942 Pattern” labels, is easy to recognize since all the button were now exposed and the breast pockets lost their pleats. To add some confusion, collectors usually also call this version “1940 Pattern”, but it isn't correct.

Helmet is the steel Mk III “turtle” model that in the later stages of the conflict (from 1944 onwards) gradually replaced the old Mk II helmet, a direct heritage of the WW1  “Brodie” helmet, or “tin hat”. Webbing is the 1937 Pattern Web Equipment, made from waterproofed cotton webbing and featuring brass fittings. The two large rectangular “Basic Pouches” on the front – designed to carry rifle ammunition (in cotton cloth bandoliers), Bren magazines or grenades – are distinctive. The uniform and equipment showed in the video are all original WW2-dated pieces.

Subscribe to the Newsletter
This article is also available in this language:
IT
Click here for more information on the topics:
RiflesHistorical FirearmsBolt-action rifles
That might interest you too: