TexasAK Designs offers a magazine adaptor kit that will allow the use of AR-15 type magazines on AK-style rifles chambered for the .223 Remington (a.k.a. 5.56x45mm) round 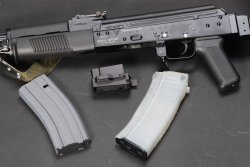 all4shooters.com
Most AK-based rifles and carbines chambered for the .223 Remington round use hard-to-find proprietary magazine - this adaptor allows the use of common AR-15 style mags!

In the field of Modern Sporting Rifles − these being, those semi-automatic, civilian-grade firearms aesthetically and, partially, technically patterned after modern military-issue rifles or carbines, often incorrectly addressed to as "assault weapons" by the anti-gun crowd − two designs stand out among all others: the US-designed AR-15 and the Soviet AK-47/AKM, with all the variants, derivatives, and clones thereof.

The common success led the two platforms to somewhat intertwine, at least ever since the 1980s: AK-type variants chambered for the .223 Remington (5.56x45mm), mostly manufactured in China, Yugoslavia and Finland, were launched on the market while at the same time several US-based manufacturers of AR-15 rifles and carbines experimented with 7.62x39mm; with the end of the Cold War, the fall of the two political blocs and the globalization of the arms market − both military and civilian − these commixtures saw a sharp rise: nowadays, AK-type rifles in .223/5.56mm caliber and AR-type rifles in 7.62x39mm are manufactured by a number of makers, in the United States, in Europe, and in Asia, for both the military and the civilian markets. 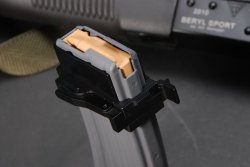 all4shooters.com
The adapter will fit any AR-15 type magazine - the original magazine release lever of the rifle will dub as a removal control for the adapter itself

Fact remains, the two platforms differ under a number of points of view that would be too long to discuss here, but the most important of them all as far as it concerns us today is the feeding system: while the AK uses solid magazines to be inserted in the flat magwell with a circular design, the AR15 uses sheet metal magazines, sometimes even too fragile, to be simply slabbed in the magazine well.

Which magazine insertion system is better overall? Well, once again, it would be too long to discuss here, and it would probably cause a quarrel between our users, but let's just take this in consideration: the AK system grants a solid and safe magazine retention, albeit at the price of a longer and more complicated magazine release and insertion process (unless you learn the many quick magazine change techniques for this kind of weapon, which are however not so simple to master correctly). The AR-15 system is faster to use, but requires a deeper magazine well, and once again, these light metal magazines may not always grant a reliable feeding, particularly if they suffer from heavy shocks, such as after falling on the ground from some height or similar situations. 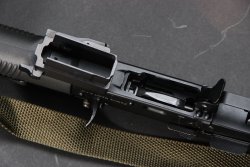 At least in north America and in western Europe, the AR-15 style rifles and carbines have a great advantage over the AK: the availability of STANAG 4179 on the civilian market is prompt and cheap by the numbers, while many AK magazines are a little bit more rare... and in the case of proprietary magazines for these AK-style rifles chambered in .223/5.56mm caliber, that "little bit" may be rephrased into a MUCH MORE rare.

Fact is, many .223-caliber AK variants use their own magazines that not only are incompatible with other AK-type magazines, but also incompatible with the magazines provided for AK-type rifles and carbines chambered for the very same .223/5.56mm caliber offered by other manufacturers. So to speak: a Chinese Norinco LR3, a Russian Saiga .223 and a Polish Beryl "Archer", albeit chambered for the same 5.56x45mm caliber and all based on an AK receiver and working system, may not always use the same magazines... and it's not so easy to find them when you need them, particularly these for unusual or specific variants that may be no longer in production. 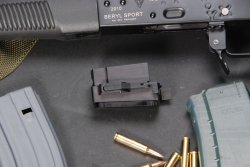 That's the reason why the American aftermarket parts industry came to the rescue: up to now, the "tacti-cool" American gun owners were able to custom-modify their AK with a plethora of accessories including scope mounts, tactical stocks and pistol grips, railed forends, and so on; now, American and international gun owners − and professional operators as well − will also be able to purchase and operate an adaptor to use AR15-type magazines on their AK-style rifles.

US-based TexasAK Designs offers just one of the many "AK to AR" magazine well adapters available out there... but among others, this is particularlly well-made, and has a peculiarity that makes it stand out: ad ambidextrous/double-sided magazine release button.

Technically speaking, this is a short device machined out of lightweight aluminium alloy, whose top portion is modeled just in the shape of the upper part of a typical AK magazine. As such, installation follows the standard AK magazine insertion procedure: it just needs to be inserted in the magazine well, front portion first, then rotating it upwards. That's done: no pins, no soldering, no... nothing. Just slab it in and forget it. 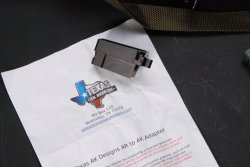 all4shooters.com
Each TexasAK Designs adapter comes with its own instructions and warnings leaflet; some .223/5.56mm AK rifles may require adaptations to fit it

Of course, the adaptor is hollow, and will perfectly fit a STANAG 4179 (AR-15 type) magazine. Once it's inserted in the standard magazine well of your .223/5.56mm caliber AK/AKM variant, you will be able to use STANAG magazines simply by slabbing them in just like you'd do on an AR-15 rifle or carbine; the lower portion of the magazine is beveled to ease the insertion, and there are two magazine ejection buttons, located on both sides, so that it's easy and quick to operate for both right-handed and left-handed shooters.

Installation is completely reversible, and non-permanent: by pushing the original flat magazine release lever of the rifle, located in front of the trigger guard, the adapter will be removed should the shooter revert to the use of the original proprietarymagazines.

We tested it on a Beryl "Archer" .223 Remington semi-automatic rifle, manufactured in Poland, and we found that it poses no problem whatsoever when it comes to feeding reliability. If you have a .223/5.56mm-chambered AK variant and a shortage of proprietary magazines, but on the other hand you have plentiful of AR-15 mags, this may just be the tool for you!

The TexasAK Designs adapter, just like many other adapters, is already available on the civilian market in several Countries in Europe, and in the United States as well. Price will vary from Country to Country; street price around Europe will generally top a little bit over 90.00€, while in the United States it goes for around 100.00US$. Perspective buyers may contact their local gun stores or distributors for information about specific availability and prices in their specific area.