+++ Premiere +++ Tec-Target-Schneider (TTS) is the name of a young German gun manufacturer, but behind this acronym is an old hand from the world of firearms, the experienced gun designer Hubert Schneider. He and his team have developed the brand new modular "Xceed" multi-caliber sniper rifle in bullpup design. The ingenious German precision mechanic and gunsmith Hubert Schneider, from Dietingen in Baden-Württemberg, was involved in the development of numerous military/law enforcement firearms designs, as well as hunting and sports guns, which always featured accuracy at the highest level as the common denominator. At Mauser he was already instrumental in the development of the legendary SR86 sniper rifle in the mid-1980s. In addition, the holder of numerous patents at Rheinmetall accompanied complex military projects through to production readiness. He also co-developed the German DSR-1 bullpup sniper rifle from DSR-Precision.

But Hubert Schneider is also a permanent presence in sports, as he also built many Seehuber 300 m match rifles for top shooters in the German national team. His wealth of experience and expertise now flows into his own TTS Xceed sniper/precision rifle, which is the current pinnacle of his work.

All the details of the TTS Xceed multi-caliber sniper rifle

Thanks to its bullpup design with bolt and box magazine located behind the grip, the TTS Xceed has more compact transport dimensions compared to conventional bolt-action rifles with identical barrel length and full ballistic performance. Michael Fischer
No compromises: The Xceed has the adjustment possibilities of a match rifle: adjustable rear stock with integrated monopod and spring-loaded cheek piece.

Available calibers for the TTS Xceed currently include: 6 XC, 6.5 Creedmoor, 6.5x47 Lapua, .308 Winchester, .300 Winchester Magnum and .338 Lapua Magnum. On the new German sniper rifle with interchangeable caliber and barrel, the bolt with 6 lugs split into 2 rows locks directly into the barrel. The gun is based on a two-part light-alloy chassis with a lower grip and an upper, long receiver with attached handguard. Due to the well thought-out design, disassembly into the main assemblies as well as caliber conversion are quick and easy. In all offered calibers the stainless steel, fluted Lothar Walther barrels with titanium alloy  flash hider are available in 2 lengths. Matched to the respective barrel length, the handguard is also available in 2 lengths. The stock can be quickly and completely separated from the receiver. After operating a lever, the bolt can be removed. The grip can also be separated from the receiver after loosening two screws. In contrast to other multi-caliber sniper rifles, the bolt head is not changed when changing the caliber, but a complete bolt is inserted instead, supplemented by the barrel and magazine. Like the receiver, the grip is made from aluminum, but has steel inserts in the magazine well in which the sheet steel box magazine snaps into place.

The magazine has a capacity for 5 cartridges in all calibers. It is dimensionally matched to the larger .338 Lapua Magnum cartridge, so the magazines for smaller calibers/cartridges have internal spacers.

Accuracy Made in Germany

However, due to the lavish development costs, fine selection of materials, workmanship and minimum tolerances, the TTS Xceed is also likely to be one of the most expensive sniper rifles on the market – price starts at 11,400 euros and a complete caliber change assembly, consisting of bolt, barrel and magazine, is available from 4100 euros.

Subscribe to the Newsletter
This article is also available in this language:
DEIT
Click here for more information on the topics:
RiflesBullpupSporting riflesLong range rifles Long range shooting.308 Winchester.300 Winchester Magnum.338 Lapua Magnum
That might interest you too: 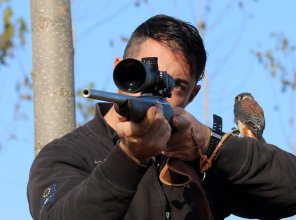 For those looking for quality, perfection and above-the-average accuracy for long range shooting, here is the Nesika Sporter in 308 Winchester caliber. A “dream rifle” with some technical subtleties and great sub-MOA accuracy. 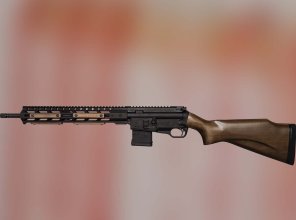 Virtual SHOT Show 2021 / New from Fightlite: SRC carbine. A semi-automatic carbine based on the AR-15 platform but with the walnut stock of a traditional hunting gun and an M-Lok interface handguard. Put that way, it sounds like some kind Frankenstein assemblage, but at heart it's a typically US sporting rifle. 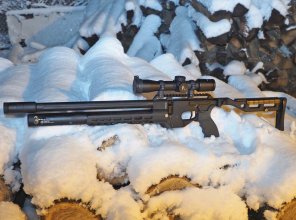 Virtual SHOT Show 2021 / New from AirMaks Arms: Katran PCP rifles. The Prague-based company specializes in the production of PCP air guns with a modern and aggressive design. Such is the case with the new Katran, available in three calibers and two barrel lengths. It features an unusual (for this type of gun) folding stock. 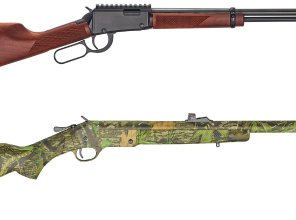 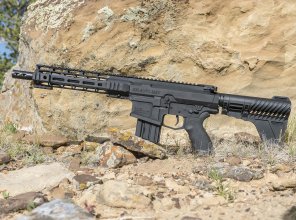 US firearms manufacturer Big Horn Armory has reintroduced the "Pistol" version of its AR500 semi-automatic rifle, the most powerful "Black Rifle" in the world. It is in fact chambered in the mighty .500 Auto Max caliber. Here on all4shooters.com you can find all its features and a short video. 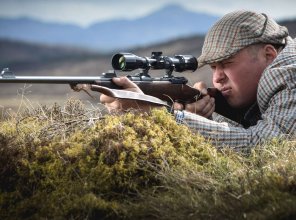 “Perfectly suited for hunting the African plains, the Western US and all forms of mountain hunting,” the new model offered by the renowned London gunmaker features a 25”/63.5 cm heavy sporter profile barrel and action is drilled and tapped for scope mounts. Quality – and price – are high end. 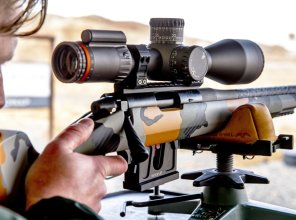 A limited-run bolt-action trainer rifle that can be be used up to 500 yards out-of-the-box: the Rim Reaper .22 LR Rifle System comes complete with a Revic PMR 428 Smart Rifle Scope and a lot of high-end features, such as a 22” carbon wrapped barrel and adjustable stock. But at $ 9975, price is non light. 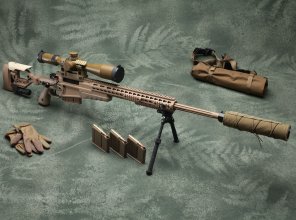 As early as 2019 it became known that the British manufacturer had received an order from its German agency to upgrade the G22 sniper rifle of the German Armed Forces. We had the privilege to extensively test the current A2 upgraded version of the Bundeswehr G22 sniper rifle in .300 Winchester Magnum.