A contribution from Giorgio Brancaglion08/11/2021 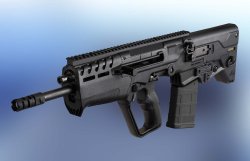 The Tavor 7, like its military predecessor, is a modular weapon system easily convertible for left-handed users.

The Israeli Tavor 21 assault rifle in 5.56 NATO was introduced on the market by IMI in 2001 and five years later it was officially adopted as the standard service weapon of the Israeli Army. The most striking feature is its bull-pup design and construction, which is almost entirely polymer. It is therefore an extremely compact weapon, since the bolt assembly is actually located inside the buttstock. This makes it possible to drastically reduce overall length – in the standard version with a 17”/432 mm barrel it is only 28.74”/730 mm long.

Over the years the Tavor has collected divided opinions among its users: particularly appreciated are its compactness, suitable for combat in urban areas, and the easy reversibility into a left-handed weapon. The first models, however, created some discontent because prone to jamming if sand gets into the action, so that the Tavor underwent some changes to eliminate this rather serious defect. The Tavor was built in a compact version with a 380 mm barrel that further enhances its excellent handling.

In a surprise move, the Israeli company IWI (IMI's current business name) recently introduced the Tavor 7 on the civilian and military markets, and the number refers to the caliber, which is the 7.62x51 NATO, or .308 Winchester commercial caliber. 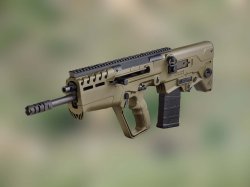 Above the barrel of the Tavor 7 is the four-position gas regulator, so that the rifle can be adjusted according to the ammo fired or for use with a silencer.

The Tavor 7 offers some improved ergonomic features, such as the ability to lock the charging handle without the use of the bolt lock, an ambidextrous M4-type magazine release, and an ambidextrous 45-degree safety. As we said, the Tavor is designed for ease of use by left-handed operators and thanks to its modular design the ejection port and charging handle can be easily moved from one side of the weapon to the other. The safety lever, magazine release button and bolt release are ambidextrous.

The IWI Tavor 7 includes an M-LOK handguard and MIL-STD 1913 Picatinny rails at 12 and 6 o'clock that allow the use of multiple devices and accessories. The Tavor 7's receiver is made from high-strength impact modified polymer, and the cold forged barrel is chrome-lined for increased accuracy and durability.

Other features of the Tavor 7 include a short-stroke gas piston with a 4-position gas regulator, (including the OFF position, a unique feature designed for special operation needs), a rotating bolt that provides maximum safety for the user, and a pistol grip that can be easily replaced or modified.

The Tavor 7 is fed by double-stack magazines with a capacity of 20 rounds of 7.62x51 caliber ammo. For the US market, the Tavor 7 – which has a list price of $2099 (about 1775 euros) is available with black, sand (FDE) and OD Green polymer receivers. For the moment, the images refer to pre-series models, so current production guns may differ in some details.

Surely the Tavor 7, even in the semi-automatic version, is an extremely modern and sophisticated firearm and we can't wait to try it. We hope it will happen very soon! We'll inform about availibility and final EU pricing asap. 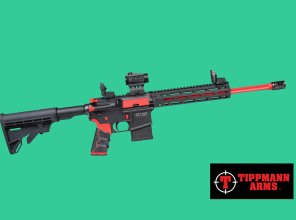