Sleek, lean and... mean: the Tanfoglio “Appeal” tactical-style semi-automatic rimfire carbine is due to land on the market soon... and all4shooters.com will give you a full insight on it! 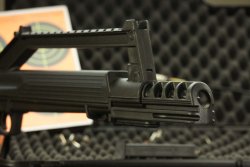 It makes a couple of years now that the “Fratelli Tanfoglio S.r.l.” company, one of the most important names in the Italian gun industry, well known for the high quality and fairly low price of its pistols, has been advertising on the Net on the press a new type of semi-automatic carbine whose first samples were also showcased at the SHOT Show, the IWA and the EXA expos. Dubbed the “Appeal”, this new sporter, rimfire carbine features a sleek and futuristic look, a bull-pup layout, and a direct recoil-operated, semi-automatic mechanism, all encased in a polymer chassis with a raised cantilever Picatinny optics mount with integrated iron sights dubbing as a carrying handle. The “Appeal” carbine was first conceived mainly for the American market − where it will be distributed by the longtime Tanfoglio handler in the United States, the EAA Corp. - European American Armory Corporation out of Rockledge (Florida) − but the positive feedback from European customers and distributors soon prompted the company to go for a contemporary launch worldwide. The first samples of the “Appeal” carbine have in fact been showcased at the EAA Corp. booth during the 2010 SHOT Show, and so much has been said, and written, about this gun since. 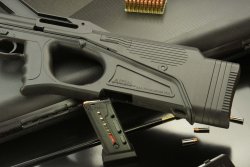 all4shooters.com
The Tanfoglio “Appeal” carbine will be distributed in the U.S. by the EAA Corp. out of Rockledge (FL): the samples showcased at gun expos up to date were only prototypes

Yet whatever you might have heard, in your Country or abroad, from the specialized (and our competiting) press and on the Internet, has been plagued by a major defect: incompleteness. Nobody told you that the “Appeal” carbine has been a mere post-experimental prototype up to date; the Tanfoglio company worked hard for years to perfect a design that was basically ready when it was first showcased, but lacked “this and that” all the little things that make the Tanfoglio guns so excellent for what they are, and Tanfoglio didnʼt meant to let its customers down by bringing a new product to the market without being first sure to have it not just “ready” but plain and simply perfect. Futhermore, Tanfoglio had to gear up for the mass production of a firearm that wasnʼt exactly in its DNA, since the company has never manufactured a carbine before. Now basically everyting is ready, and the Tanfoglio “Appeal” should start delivering sometime in the next months, by early 2013 at the most, and given the planned chamberings for the most popular rimfire calibers (.22-Long Rifle, .22-WMR and .17-HMR) itʼs bound to become the ultimate Plinking gun, the universal tool for varmint hunt, leisure shooting, range/academic/olympic shooting, and marksmanship training. As soon as the first production samples will roll out of the Tanfoglio factory, all4shooters.com will bring you an important, extensive review, to introduce you “up close and personally” to what has all potentials to become another modern classic of the contemporary Italian gun industries much like what the rimfire assault rifle clones made by companies such as ADLER/Armi Jäger (distributed in the United States by Mitchell) were all throughout the 1970s and 1980s. So... Stay Tuned!