The Ruger Firearms company now offers the AR-556 semi-automatic rifle in 5,56x45mm/.223 Remington caliber as a reliable, rugged, cost-effective alternative to other AR-15 based platforms!

The Ruger AR-556 5,56x45mm/.223 Remington caliber semi-automatic rifle, launched earlier in October at the end of Ruger's later-2014 wave of new products, is perfectly in-line with the international trend of an increasing demand by civilian shooters for modern sporting rifles (those semi-automatic centerfire long guns cosmetically and, partially, technically patterned after modern military-issue weapons, a category which the anti-gun lobby addresses to with the derogatory term of "assault weapons") that would offer reliability, rugged construction, and affordable prices − an important factor, given the ongoing economic crisis whose stranglehold over the United States may be loosening, but remains quite strong in Europe and elsewhere.

Ruger Firearms first entered the AR15-type rifles market in 2009 with the SR-556 semi-automatic rifle, based upon a proprietary two-stage gas piston: an excellent rifle, whose technology contents however keep the price tag on mid-to-high levels; the challenge for the Company was now to create an affordable, superior-technology AR platform whose quality would remain stable and superior to that of many low-price modern sporting rifles available both in Europe and in the United States.

Sturm, Ruger & Co., Inc.
The AR-556 is based upon a standard direct gas impingment system and comes with a standard 16-inches medium contour barrel

The goal was met by creating a rifle that is both packed with interesting features and purged from anything that would be redundant or otherwise unnecessary.

The Ruger AR-556 rifle sports a standard AR-type glass-filled Nylon handguard held in place by a patent pending designed Delta Ring, which is easier to loosen than a standard Delta Ring and will allow custom replacement of the factory handguard at the shooter's will with much less hassle than any other AR design.

Ruger's own manufactured six-position telescoping stock is installed on a MIL-SPEC buffer tube, which will allow owners to replace it with any other stock available on the market; an attachment ring for single-point slings and other tactical sling systems is also factory-issued with the Ruger AR-556 rifle.

The only MIL-STD-1913 "Picatinny" rail to be found on the Ruger AR-556 rifle can be found on top of the MIL Type III hard-anodized, forged 7075-T6 alloy upper receiver; it hosts a flip-up Ruger adjustable rear sight, and makes the AR-556 ready for any commercial or military-grade optical sight. 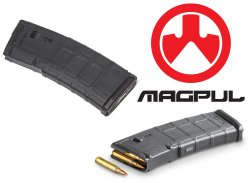 The forged, hard-anodized aluminum lower receiver of the Ruger AR-556 rifle sports a standard AR-15 controls configuration, but it will quickly accept aftermarket oversized or ambidextrous control switches or buttons.

The machined gas block of the AR-556 rifle hosts the "F" height adjustable front post sight, which will thus co-witness with optics, and integrates a bayonet lug; it is another Ruger patent pending design, whose main features are the anti-glare serrated faces and the machined quick-detachment port at its bottom, which will make removal for cleaning or replacement much easier for shooters who prefer low-profile gas blocks and free-float aftermarket handguards. 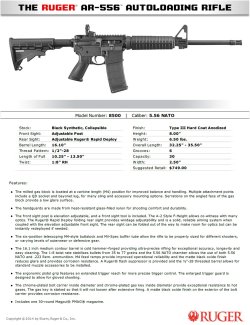 A direct gas impingement rifle, the Ruger AR-556 is fit with a 9310 stainless steel machined bolt and bolt carrier group that's 100% internally chrome-lined (even the gas key is plated!) and pressure-tested along with the barrel as a single assembly.

The first firearm to be entirely conceived and manufactured in Ruger's new plant of Mayodan (North Carolina, USA), the AR-556 autoloading rifle is a great alternative for both civilian shooters looking for a rugged and reliable modern sporting firearm and for local Police departments seeking for an AR-type patrol carbine that would be both budget-priced and fit for duty.

The manufacturer's suggested retail price for the Ruger AR-556 autoloading rifle has been set at $749.00 in the United States − that's 587,33€ at current change. Should it not be ITAR-restricted, the price would not only make it a great seller in the United States, but also in Europe, where it would become a cost-effective alternative to higher-priced modern sporting rifles offered by famous brands such as Colt, Bushmaster and Heckler & Koch and to budget-priced ARs of Chinese manufacture.

Further informations concerning non-US sales of the Ruger AR-556 autoloading rifle, however, may not be available before early 2015 at the very least.