A contribution from Pierangelo Tendas11/12/2012

Dmitry Rogozin, Vice-Prime Minister of the Russian Federation and President of the Military-Industrial Commission, announced on his official Twitter profile that the 93-years-old, former Red Army lieutenant-general Mikhail Timofeʼevič Kalashnikov, possibly the worldʼs most famous gun designer and father of the ubiquitous assault rifle, agreed to license out his surname for the foundation of the KALASHNIKOV Complex, a group of companies that should merge the two most important Russian arms industries and save them from bankruptcy.

This wouldnʼt be the first time for Kalashnikovʼs surname to be used as a marketing brand under license: the German GSG - German Sport Guns GmbH company has already been licensed to manufacture a .22 Long Rifle sports shooting clone of the AKM design under the “Kalashnikov” name itself, while the French Cybergun group has been licensed with the “Kalashnikov” brand and logo to manufacture a line of 6mm BB airsoft replicas of Russian arms. Last, Kalashnikov allowed his name and the shape of his assault rifle to be used by a Russian distillery for the production of a limited edition of very distinctively-shaped bottles of Vodka. Yet this is the most important commercial and industrial venture today to use the Kalashnikov name to date. 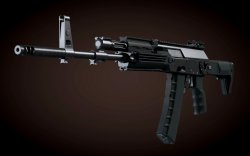 The two companies that should merge in the KALASHNIKOV Complex are the IZHMASH Concern and the BAIKAL - Izhmash Mechanical Plant, both headquartered in Izhevsk, the capital city of the Udmurt Republic on the shores of the Baikal lake. IZHMASH and BAIKAL are Russiaʼs most important small arms manufacturers, directly competing with the KBP Instruments Design Bureau, the TsKIB-SOO Design Bureau and the TOZ Mechanical Plant, headquartered in the southern city of Tula, for the title of “Heart of the Russian arms industry”. Both IZHMASH and BAIKAL are open joint-stock companies, with the majority of the stocks still owned by the Russian State. Their product lines include the Makarov PM, Yaryigin PYa and Margolin MCM pistols, the SAIGA and TIGR series of rifles and shotguns, the Dragunov SVD, SVDM and SVDS sniper rifles and the AK, AKM and AK100 series of assault rifles, plus a wide array of other shotguns, rifles and pistols as well as industrial products.

IZHMASH and BAIKAL are both living an era of financial troubles. IZHMASH itself is under bankruptcy administration, and both companies saw their hopes for the placement of new products crumble under the weight of both internal and foreign competition − with the Tula-based KBP Instruments Design Bureau simply offering more modern and innovative firearms, and with more and more Countries traditionally relying on the Russian industry for their military small arms inventories now reverting to European and U.S. products, for both political and practical reasons as Western firearms appear more apt to fit the challenges of counter-terrorism operations and asymmetric warfare.

BAIKALʼs latest offer to the Russian government, the 9x19mm Yaryigin PYa semi-automatic pistol born under the Grach program, failed to universally replace the Makarov PM as the standard service handgun of Russian military and government forces due to a generally-perceived low product quality in comparaison with other national products such as the KBP GSh-18 pistol. On IZHMASHʼs side, the Nikonov AN-94 assault rifle conceived under the Abakan program for the replacement of the AK series of rifles in Russian service failed to catch on the governmental markets both internally and abroad due to excessive technical complexity and cost per unit. IZHMASH recently conceived the highly modular AK-12 rifle as a new possibly viable military service rifle, and this might be the main flagship product on which the newborn KALASHNIKOV Complex might put everything on.

The birth of the KALASHNIKOV Complex might be the Russian government response to months and months of turmoil and protests from the workers of both companies, and more specifically to a letter sent by Mikhail Timofeʼevič Kalashnikov himself to the Russian president Vladimir Putin asking him to save the IZHMASH factory and the core of the Russian arms industry.

VPK - Military Industry Commission of the Government of the Russian Federation