German Sport Guns is now marketing - through ATI in the United States - a renewed version of the StG44 .22 Long Rifle replica carbine, with metal and wooden parts totally faithful to the original! 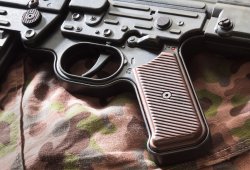 Oleg Volk
A true mainstay in firearms history is now available in a rimfire, semi-automatic variant that makes it available to shooters worldwide!

Here at ALL4SHOOTERS.COM, we have somewhat of a fascination for .22 rimfire versions of military weapon designs. Some readers often ask us to go "to hell with small calibers" and write only about the "real McCoys"... but these guns do have multiple very good reasons to be!

Rimfire versions of military service rifles trace their roots back to the tradition of many Armies − which ended halfway through the 20th Century − to use rimfire rifles and carbines to train recruits to the basics of gun handling and individual marksmanship, before issuing them with full-caliber guns. The reason is simple: back then, most Armies in the world − and particularly in the former-communist Countries of Eastern Europe − trained young draftees and conscripts who had never handled or sometimes even seen a gun before, and letting them handle a full-caliber rifle or carbine right from the very beginning might have been not exactly efficient, nor safe at all.

Today, military-style rimfire rifles and carbines are purely leisure and sporting tools, and as such are perfectly apt to their original purposes − training youngsters to the basics of marksmanship and safe gun handling − and sometimes are the way to go if your closest shooting range is an indoors structure and won't allow you to shoot with "high" calibers. 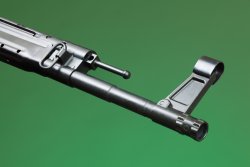 Oleg Volk
The rimfire GSG-StG44 is manufactured out of steel and wood, homaging the manufacturing techniques used for the original "Sturmgewehr"

Of course economy plays its part: .22 rimfires allow you to shoot more for less money and save "real" guns and "real" ammunition for when it "really" counts. But there's yet another aspect that shouldn't be forgotten: .22 rimfires are sometimes the only way to go for some shooters if they want to own certain gun models.

This is not just about these tightly gun-controlled jurisdictions (United Kingdom or Japan, to name a couple) where semi-automatic centerfire long guns are tightly restricted or outright banned; we are more specifically thinking about these particular guns whose originals are long out of production and may thus be recovered only at a high price, after long years of research... only to find out that we purchased something that's in less than ideal conditions, that has undergone heavy modifications to make it civilian legal, and that we can't even shoot once because there's no ammunition for it to be found in stores.

That's the case of the German StG44, the Sturmgewehr used by the German forces in the last months and years of World War 2: it was the first assault rifle ever, and the biggest source of inspiration for Mikhail Timofe'evič Kalashnikov when he worked on his AK-47. 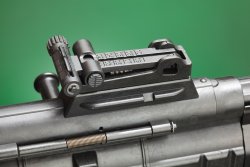 The StG44 went totally out of production after WW2, and most samples were destroyed; other surviving rifles were scattered all over the world, some continuing to be used by eastern-European armies for decades. The very few StG44s that reached the international civilian markets were severely modified to adapt them to commercial purposes, and the least modified they were, the rarest and higher-priced they are today.

A few years ago, a German company came out with a semi-automatic, civilian-grade StG44 variant that's 100% faithful to the original, down to markings, manufacturing procedures and materials. But said company only makes them on order, and prices are extremely steep.

Not to mention, the 7.92x33mm (8mm Kurz) ammunition is a rare bird to be encountered if you ever want to squeeze a few shots with your Sturmgewehr. As of today, the only 8mm Kurz ammunition line to be manufactured by the numbers comes from the Prvi Partizan company, headquartered in the Serbian town of Uzice. Other manufacturers that offered, or offer, small lots of 8mm Kurz ammo from time to time − including Hornady − often use Prvi Partizan balls or cases. And not all shooters feel safe or expert enough to make their own ammunition by modifying balls and cases made for other calibers, particularly if the safety of a piece of history gun is at stake. 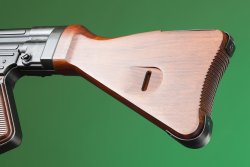 For the biggest part of European and American gun collectors, thus, the only possibility to purchase a Sturmgewehr at an accessible price is to go for a rimfire replica manufactured by German Sport Guns.

The GSG − German Sport Guns GmbH company was founded at the beginning of the 2000s in the German town of Ense-Höingen by three gun-enthusiastic engineers − Manfred Niehaus, Dietmar Ende e Michael Swoboda − and after a brief period in which they focused on airguns and Airsoft replicas, the Company turned into the manufacture of high-grade rimfire sporting clones of well-known military and civilian firearm platforms. Their Heckler & Koch MP5 (GSG-522), AKM (GSG-AK47) and Colt Government (GSG-1911) replicas are true best sellers in Europe and north America alike, and stand among other competiting products as per quality, performance, and price. 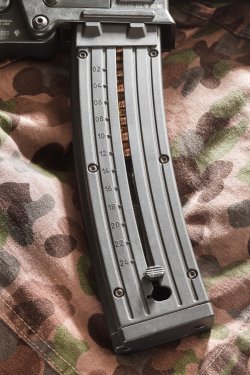 Faithful to their motto "German history meets German engineering", GSG first showcased its rimfire version of the StG44 design two years ago at the Las Vegas SHOT Show. The GSG-StG44 is a simple blowback-operated semi-automatic carbine, and has been available for commercial purchases for some time now.

While about to launch yet another rimfire replica of a WW2-vintage design − the announced .22-caliber version of the Mp40 sub-machinegun, first seen as a prototype at the 2013 editions of the SHOT Show in Las Vegas and the IWA in Nuremberg, Germany − GSG also announced that the GSG-StG44 carbine is now shipping worldwide.

The model employs only faithful materials in its construction: stamped steel and wood. This shouldn't cause a sharp rise in price, but is surely enough to make gun historians and collectors worldwide very, very happy. The only part that is and will remain made out of polymer is the detachable single-stack magazine, which is available in 5, 10 and 25-rounds versions.

We thus eagerly await to see it at the next SHOT Show, at the ATI - American Tactical Imports booth: the company, headquartered in Summerville (South Carolina), is the authorized US distributor for GSG, and sells the rimfire GSG-StG44 in the United States at an MSRP of US$624.95. Perspective international buyers should contact their local distributors for informations concerning availability and pricing of all German Sport Guns products.