Light, compact and powerful: the LR-G2 LW MOE semiauto carbine from DPMS Panther Arms in.308 Winchester is an ideal introduction gun to the world of the larger bore Black Rifles, thanks to its performance, innovative design and engineering, and -last but not least – an MSRP in Europe under 2500 Euro.

Seldom we get the chance to test a Black Rifle that is really "different" from the mass of mainstream guns. What once was one of the greatest advantages of the AR-15 architecture, a virtually universal standard that  allows a level of modularity that has no equal in the world of modern firearms, has over time backfired, in a sense. In a market where most products are seemingly all the same, there has long been a race for differentiation: operating systems with short-stroke pistons (and even a couple of long-stroke systems à la AK), all sorts of solutions to eliminate and replace the buffer extension with a side foldable stock, redesigning the standard T-handle to have a charging handle on the left side of the upper... in this plethora of features meant to make each product stand out from the crowd of contenders, some sport really innovative and useful designs, and some simply don’t – they are clever solutions looking for a problem to solve.

The situation in the larger .30 bore caliber Black Rifle market is slightly different, due to the fact that a true “AR-10” standard has never been agreed upon between manufacturers – and because many patents were, and are, still active. Including the name, which is, by the way, a copyright owned by Armalite. 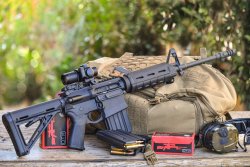 Since the renewed popularity of the large bore Black Rifle platform, with the SR-25 from KAC, manufacturers have more or less always aligned themselves with some design parameters, the most important being the diameter of the Bolt Carrier Group (BCG) and the general pattern of the original AR-10 as designed by Stoner. In most instances, the magazine used in these designs is also following the original format. Sure, there were differences, like the HK 417 proprietary magazine or the Armalite AR-10B using a modified M-14 pattern, but today everyone uses the Stoner original – or SR-25 magazine.

The rifle we received for testing is not a brand-new product. It actually dates back to 2014, when DPMS presented the second generation of its .308-caliber semi-automatic rifle platform at the Shot Show. But the DPMS LR-G2 represents one of the few real innovations in the Black Rifle scene, thanks to its very interesting design and the ingenuity of the technical solutions adopted. DPMS managed to disrupt the market with a gun that offers the power, range and accuracy of a .308 Winchester, in a package that is only slightly bulker and heavier than an AR-15, with unprecedented compatibility with the latter platform.

The DPMS rifle we received has one 10-round reduced capacity magazine. The overall configuration is pretty bare, “spartan” and actually interesting: from the name we can immediately gleam that it is the lightest version (LW stands for Light Weight) and that all furniture is produced by Magpul: forend, pistol grip, folding rear sight and telescopic stock are in fact MOE (Magpul Original Equipment). 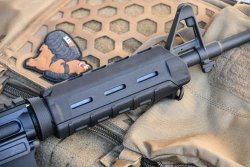 Franco Palamaro, © F.PALAMARO
The polymeric forend is a standard M4 Magpul MoE. It does not make the barrel floating and in fact replicates the function of the M4's two-shell forend in .223. Note the “triangle” FSB, a true staple of the traditional Black Rifle silhouette.

The LR-G2 semi-automatic carbine uses the classic direct impingement gas system with a tube that carries gas pressure inside the BCG. 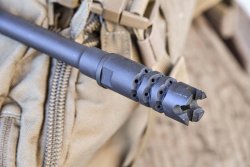 Franco Palamaro, © F.PALAMARO
The LR-G2 LW MOE's muzzle brake/flash hider is a DPMS Cancellation Brake, very effective at taming the violent recoil of the .308 caliber ammunition. It's quite noisy.

The 16” barrel sports a novel profile, that is lightened to pencil diameter towards the muzzle, uses a standard “triangle” Front Sight Base, and features an interesting and proprietary muzzle brake/flash hider produced by DPMS, called Cancellation Brake.

The rifling pitch is 1:10 and the bore of the barrel is chromed. The upper receiver is of the Flat Top type with Picatinny rail. The barrel is mounted on the upper with a proprietary barrel nut and a classic Delta-ring. The lower has an integrated trigger guard, the firing control group is standard AR-15, and the magazine well is conspicuously flared to allow for fast mag changes. 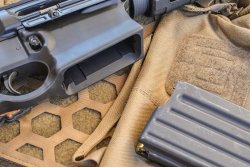 Franco Palamaro, © F.PALAMARO
The magazine well is flared to make fast mag changes easier. The gun takes SR-25 magazines, so it works perfectly with Magpul and many other aftermarket magazines.

But let's get to the features that make DPMS's LR-G2 guns special compared to the manufacturer’s first-generation LR-308 rifles (and most Black Rifles in .308). DPMS decided to completely redesign the action, keeping only the magazine. The design goal was to base the entire platform on the dimensions of the AR-15 platform, specifically the inside diameter of the upper receiver. With this decision, it was necessary to be able to fit in an inside diameter of just 25.36 mm (compared to 30.48 mm of the upper in .308 standard), the barrel extension, entire BCG (with its direct gas system) and the feeding system of the larger round. 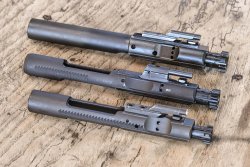 DPMS engineers succeed, stretching the action by only 23 mm (upper and lower receiver). The height of the rail on the upper receiver is identical to that of an AR-15, which means that most of the railed, or otherwise KeyMod/MLOK equipped, forends on the market for that platform are perfectly compatible; however, the barrel nut is proprietary. Both receivers are built using 7075-T6 forgings, hard anodized and Teflon coated. In the upper receiver a steel feeding ramp block is added, locked in place using two roll pins, to improve feeding of the large and heavy 7.62x51mm/ .308 Winchester rounds and at the same time avoid damage to the softer aluminum alloy of the upper. 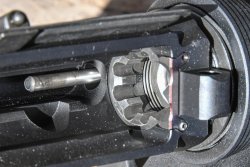 Franco Palamaro, © F.PALAMARO
Lower view of the upper of the DPMS LR-G2, with the star chamber (inside one of the fluted reliefs can be seen) and the steel feeding ramp mounted using two roll pins.

Looking at the internally hard-chromed BCG it’s obvious the level of ingenuity that went into the design, with details such as integrating the gas key in the BCG, and moving the milled notch in the carrier used to open the ejection window door in the rear to make space for the bolt tail; the milled reliefs that corresponds to the feeding lips of the magazine under the BCG are also shallower, to make way for the "standard 308" diameter bolt body, with only the locking lugs brought to a diameter compatible with the smaller barrel extension of the Gen2. The bolt in particular has been redesigned in its entirety, with two ejectors, each equipped with its own spring, and an extractor that uses a wire-free elastomer button, with an operational life estimated at over 100,000 rounds. The seat of the cam pin is keyed to avoid errors in reassembly and reinforce the weakest point of any AR bolt 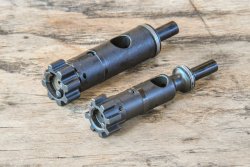 Franco Palamaro, © F.PALAMARO
The bolt of an AR-15 compared to that of the DPMS Panther-Arms LR-G2 LW.

The barrel has a profile that’s perfectly compatible with those of an AR-15, only the barrel extension and the aforementioned barrel nut are different; of course, being the barrel bored for a .30 caliber, the muzzle is 5/8x24 threaded. Note that the barrel is externally fluted around the chamber: these three relief cuts penetrate the star chamber and in the event of a case head failure, will allow to vent the explosive pressure away from the chamber guiding the flow along the barrel, for greater safety of the shooter and limiting any possible Ka-Boom damage 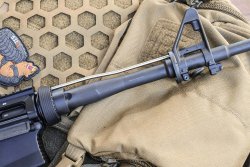 Franco Palamaro, © F.PALAMARO
Below the MOE forend we find an interesting profile of the barrel, with dimensions that are perfectly compatible with those of an AR15 .223 barrel.

The stock, buffer tube and accessories are standard AR15, only the shorter buffer and main spring are proprietary. The entire gas system, carrier group and buffer weights, and main spring geometry have been carefully balanced to make the platform reliable with any ammunition used – a no easy feat, as the complete G2 action weighs 30% less than the previous LR-308 action of the same manufacturer.

How does it shoot? 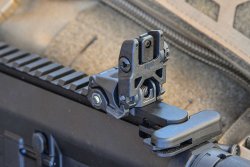 All these features make handling and shooting of the LR-G2 LW MOE practically the same as a similarly configured AR-15: you literally forget that you have a .308 caliber gun; the lightness of the gun, the handling speed and even target picture recovery are so much better than the average .308 AR. Obviously the recoil is hefty, dry and the pulse on the shoulder is substantial, but unlike other AR-10s, it is bearable and well manageable, thanks to the efficient muzzle brake, lighter moving masses and the careful calibration of the amount of gas bled from the barrel that gives just the right kinetic energy to the BCG group to cycle the gun with absolute reliability.

The magazine capacity is limited with an aluminum rivet that tends to make mag changes a little more difficult, rubbing and binding into the well and blocking free fall of the mag. If you live in EU and must use reduced-capacity mags, we suggest using internally limited Magpul P-MAG 20LR magazines. 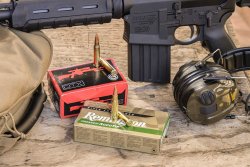 The ammunition used in our live fire range test, includes the brand new Geco DTX ammo with 150-grain FMJ bullet, Geco Sport with 147-grain bullet and Remington Premier Ammo with Accutip Boat Tail 165 grains bullet. The best were the Remington, with a five round group just over three centimeters at 100 meters.

Sure, the classic “triangle” FSB is nice looking, although with any optics you will always notice a shadow at the top of the eyepiece, while with a red dot the FSB will always block the lower third of the field of view. In the latter configuration it is possible to "co-witness" the Red Dot with the iron sights. 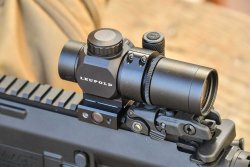 Franco Palamaro, © F.PALAMARO
The Leupold Prismatic scope used for the test; compared to a red dot, it improves the shooter’s eye  astigmatism – just like the author... and if the battery is dead it works anyway.

We tried the LR-G2 LW MOE with a Leupold 6-18x40 VX-Freedom riflescope that was sent to us with the gun, however we feel that this glass is not suitable for the gun’s setup, meant to be fast, light and agile – and with the classic FSB. So, we shot with this glass just to test the accuracy using the higher magnification and then we switched to a more congenial Leupold Prismatic with unit magnification to test handling and  speed of the carbine.

The accuracy is excellent considering the destination of use, the barrel’s profile and chromed bore, and the standard “battle” AR-15 firing control group. MRSP should vary between 2200 and 2400 euro, depending on VAT and distributors availability.

A final note in relation to the manufacturer of the LR-G2 LW MOE: DPMS, part of the Freedom Arms group (which includes Remington, Bushmaster, Marlin and many other brands), closed its website in January 2020 and the web address leads to a half-empty page on the Remington website. The production facility in St. Cloud, NY has been closed too. At this year's Shot, Freedom Group announced a stop of all DPMS, Bushmaster and Tapco operations, leaving it on hold if production will ever resume. The sample we tested was built in St. Cloud, and we advise anyone who wants to own a DPMS-Panther Arms G2 gun to hurry as long as they are available from the importer.