The Frech CYBERGUN Group launches a gas-powered version of its “Mauser SR” rifle, whose spring-operated variant is already a market success 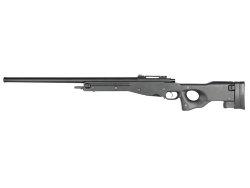 The French CYBERGUN S.A. Group is a worldwide exclusive bulk distributor for the Airsoft guns manufactured in Taiwan by G&G Armament (Guay&Guay), a company whose activity doesnʼt simply stops in making MilSim replicas, but also focuses on applying the highest possible degree of technology to the Airsoft market. One of the most successful Cybergun/G&G products to date is the bolt-action “Mauser SR” rifle, manufactured under direct German license and featuring a perfect replica of the renown Mauser action embedded on an “Accuracy International”-style thumbhole stock to meet the tastes of the vast majority of Airsoft skirmishers. Said replica is a spring-operated, bolt-action system that maintains an high level of realism in operation. 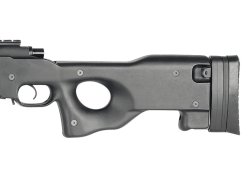 One of the most interesting new products from Cybergun/Guay&Guay for the year 2012 is a gas-operated variant of the system, dubbed the “Mauser SR-Gas”. The choice of coming up with such a hybrid system was made after most, if not all, of the original “Mauser SR” buyers asked the company to come out with a system to enhance the muzzle energy up to 1,9 Joules (1 Joule where required by law), roughly the equivalent of a muzzle velocity exceeding 100 metres per second, resulting in superior range and accuracy if compared with the most directly competing products. The gas tank is integrated in the detachable magazine, which can hold up to 16 6mm BB pellets; this was specifically made to safeguard the highest possible level of realism in the operation of the replica, given that manually rearming will be always required to chamber a BB, shot after shot, even with the gas propulsion system. 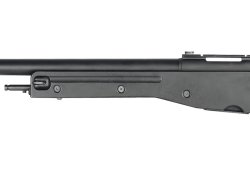 Cybergun S.A.
The strenght of metal and the light weight of polymer blend together in this high-quality, yet fairly priced replica

The Cybergun/G&G “Mauser SR-Gas” airsoft rifle is 115 cm. long and weights 3.8 kilos; it features an adjustable Hop-Up system and a top, short Picatinny rail for optics. The frame and the barrel for this replica are entirely built out of metal, while the stock − which features an adjustable butt-stock and a frontal tripod attachment point − has been constructed in polymer. Overall, the new Cybergun/G&G “Mauser SR-Gas” Airsoft rifle is an incredibly realistic and highly performant replica, which comes for a fairly low price, given its MSRP that ranges around 200.00 euro in Europe.