Headquartered in Azzano Mella, a small town in the northern Province of Brescia, the true "motherland" of the Italian gun industry, the Armi Chiappa - KIMAR S.r.l. group was previously known for the high quality of its Western-style muzzle-loader and metallic cartridge replica rifles and revolvers. Although these products still make up for an important part of Chiappa's current production, the company recently changed to feature a slightly more "up-to-date" product line which still offers mostly hunting and sporting shotguns, rimfire carbines and pistols, but with a decisely modern taste added to it. First, a few years ago, it was the Rhino line of peculiar service and defense revolvers, available in calibers such as .357-Magnum, .40 Smith & Wesson and so on; then, there were the .22 Long Rifle knock-offs of the M1911-A1 and Beretta M9 pistols, the rimfire versions of the U.S. M1 and M4 carbines − the M1-22 and "MFour" − and then this year it was the time for three centerfire pistols, chambered in 9mm and .45 calibers; for three pump-action and two behemoth triple-barrel top-break hunting shotguns; and for this handy little carbine, once again offered in the .22 Long Rifle caliber, that's been dubbed the "Little Badger".

Chiappa's "Little Badger" carbine is, from a merely technical standpoint, based upon another product from the same brand, the "Double Badger" hunting rifle, albeit differences between the two are several, including the fact that the "Double Badger" sports wooden furniture and two over-and-under barrels − for centerfire and rimfire rounds − while the "Little Badger" is a single-shot rifle and features a sole .22 Long Rifle barrel which breaks open for loading and for the removal of empty shells after each shot; not to mention that the "Little Badger" has very little furniture... to use an understatement. 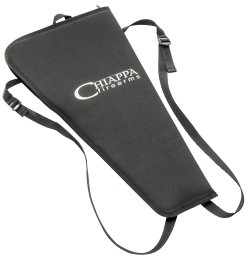 KIMAR S.r.l. - Chiappa Firearms Ltd.
Among other accessories offered for the "Little Badger" is also this Nylon carry bag

The "Little Badger" is truly minimalist in nature, and features basically no frills at all. The 16.½-inch barrel comes with the same iron sights − adjustable rear, fixed front − used in the Chiappa's rimfire version of the U.S. M1 carbine. Build is basically 100% "naked" metal, with a fixed, skeletonized, wire stock and a quad MIL-STD-1913 "Picatinny" rail located around the rear portion of the barrel to dub as both an accessories attachment point and an improvised handguard; another shorter rail is located behind the trigger guard to allow the installation of an aftermarket accessory pistol grip, while all controls are purely manual and ambidextrous: the break-open lever is located in front of the trigger guard, while the hammer must be manually cocked before each shot and also represents the only manual safety device on the gun. The Chiappa "Little Badger" is obviously cosmetically and conceptually inspired by the USAF M6 and other similar "Survival Rifles" that were issued to air force pilots in several Countries up until very recently, and as such, it is a "no bells and whistles" design, topping barely 3.5 lbs in overall weight and being foldable in half for easy transport while maintaining "operational readiness". The "Little Badger" is 32-inches long overall, which fall to merely 16.5-inches when folded.

Oleg Volk
As lightweight and cheap as it can be, the "Little Badger" is also incredibly versatile

Being so essential, the Chiappa "Little Badger" is offered with little accessories − a Nylon carry bag and a canvas ammunition carrier to be installed on the stock, that's all − and yet it's extremely versatile and can be made to fit a variety of aftermarket third-party add-ons; offered at a little more than 100.00US$ on the United States market, it's also truly dirt cheap, while remaining as sturdy and long-lasting as such a small rimfire plinker can ever be. It is also a pretty neat and accurate little gun to shoot anyway, and it will definitely make for either a handy rodent gun or a reliable instrument to train the youngest, newest generation of shooters and to teach them the basics of marksmanship and, first of all, gun safety. And despite the small caliber, we are sure it can still find a place in the backpack of outdoor enthusiasts when out for a long ride in the woods, or maybe for a wilderness camping weekend... just in case, that is.