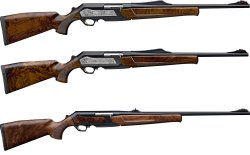 Browning International, S.A.
Variants of the Browning BAR “Zenith” autoloading hunting rifle to feature the Hand-Cocking system now include, but are not limited to, the “Big Game”, “Ultimate” and “Prestige Wood Affût”

It makes not too much time, now, that the Browning International arms group launched a new technical innovation for their BAR series of premium semi-automatic rifles, probably the most popular and widely known hunting guns available on the global market today. Dubbed the HC for “Hand-Cocking”, this technical innovation consists in a modified semi-automatic working system that will automatically chamber a fresh round after every shot without recocking the hammer; said operation has to be done manually by the shooter, through the control located just over the grip, much in the position and the style of an external hammer: the HC system needs the shooter to push a button on top of the lever and push it forward with the thumb in order to recock the hammer and allow the gun to fire again.

This system − which is not factory-standard to all BAR rifles, but only to those featuring “HC” in their model name, thus still granting freedom of choice for those hunters and shooters who prefer a totally self-loading rifle − further enhances the high safety levels of the BAR rifle, while still allowing greater volume of fire over bolt-action or manual rifles. Ever since its launch, the Browning BAR hand-cocking system turned increasingly popular between huntsmen in Europe and north America.

Browning International, S.A.
May the hand cocking system succeed in bringing back the BAR autoloader to unfriendly jurisdictions?

Itʼs Browningʼs news, released publicly at the 2013 SHOT Show, that the HC “Hand-Cocking” system is now available as an optional on all wooden-furniture BAR “Zenith” rifle models: “Wood”, “Ultimate”, “Big Game” and “Wood Affût”. Other than just offering a new alternative for all those hunters who prefer to be completely able to control personally every aspect of every single shot, to achieve the best in accuracy and performance, the “Hand-Cocking” system might actually succeed in bringing back the BAR semi-automatics to those jurisdictions − such as Australia or the United Kingdom − with a long-standing ban on all semi-automatic centerfire rifles. Being the BAR Zenith HC models technically not completely semi-automatic (theyʼll automatically load a round in chamber but the hammer needs manual cocking), they might not be considered by the local authorities as falling within the banned categories.